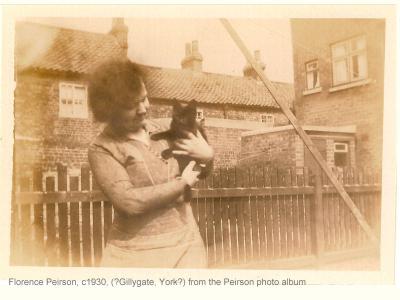 This is the last photo I have from Kathleen Peirson’s album. I’m including it partly because I’d like to be able to identify the location, though I’m not too hopeful we can. Also because it made me think about old photographs in general and the way we learn to look at them.

Clearly, it’s mainly a nice old photo of a young woman holding a black cat. Like the other photos it dates from about 1930. It’s Florence Peirson, Kathleen’s sister.

Ian, who sent me the photos, asked if I thought it was at or near 63 Gillygate, on the corner of Portland Street, where the family lived for a while. My immediate reaction was that it couldn’t be, that it looked more like a rural location. They’re humble dwellings in the background, with pantiles, not slate, on the roofs. I looked at the satellite view on Google maps to confirm what I suspected, that only the older buildings on Gillygate have roofs like that. And not many are that small.

What it did remind me of was the back of the pub almost opposite, known as the Bay Horse for many decades (now the Pink Pony) and specifically, the beer garden area behind it, at the bottom of the slope to the city walls. I remember sitting there many summer evenings in the mid 1980s.

I can’t quite make it fit, but then the pub building seems to have been remodelled/rebuilt since 1930.

Old street directories, plans and maps, and my brief look at the council minutes available in the library all suggest that there were small cottages in a court or yard behind the pub (as there were behind other buildings on this side of the street). The 1913 directory suggests ‘Wakefield’s Court’ was behind the Bay Horse. The buildings in the background could be those, since demolished. If they were demolished as ‘unsanitary’ as so many buildings were in the 1930s, then the city archives might have photos. They seem to have photos of other clearance areas in the city.

The building to the right looks modern, something built not long before 1930.

A couple of other things noticed — that the window behind Florence looks like a ‘Yorkshire sash’, where the sashes slide horizontally rather than vertically. (The pane on the right looks to be recessed compared to the one on the left.) I’ve seen these in rural locations in Yorkshire but never noticed any in York itself.

The piece of wood slanting across the photo may be a clothes prop for a washing line. I can’t imagine what else it would be, in fact. This may suggest that Florence is standing on a grassed/garden area. Possibly supporting my ‘beer garden behind the pub’ theory.

So, are we on Gillygate, or somewhere else entirely? I did have a wander into the beer garden the other week, when passing, and stood about for a while scrutinising the backs of the buildings visible from there, but realised I looked a bit odd and possibly suspicious, so didn’t stay long. Maybe if anyone reading this is visiting the pub and sitting in the beer garden they could have a better look.

Perhaps we’ll never be able to pinpoint the location. Though putting things online makes it more likely. I’ve just received photos clarifying the location of a photo posted last year I wasn’t sure about. More on that soon …