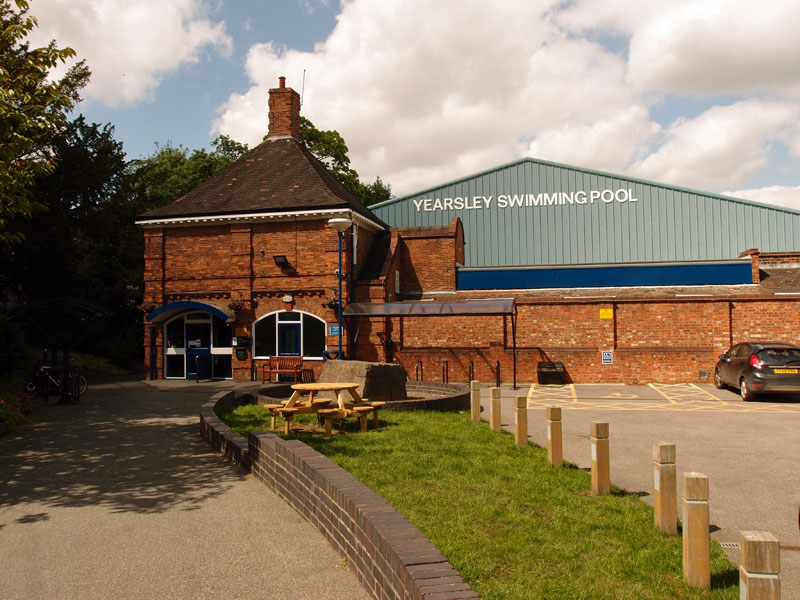 For some time I’ve been meaning to mention Yearsley Baths, which looked to be under threat of closure. That is no longer the case, and I know many people are very happy about this.

I’ve never been inside, but I have admired it as part of the Rowntree story here in this part of York, near the factory, with the Joseph Rowntree Theatre and the Joseph Rowntree Library, a cluster of buildings providing a range of facilities clearly recognised as parts of a well-rounded, active, educated life, encouraging self-expression, self-improvement, and exercise.

Yearsley Baths doesn’t look particularly stunning from the roundabout side, as pictured above. But I particularly want to mention this lettering down its Haxby Road side, above the original entrance. 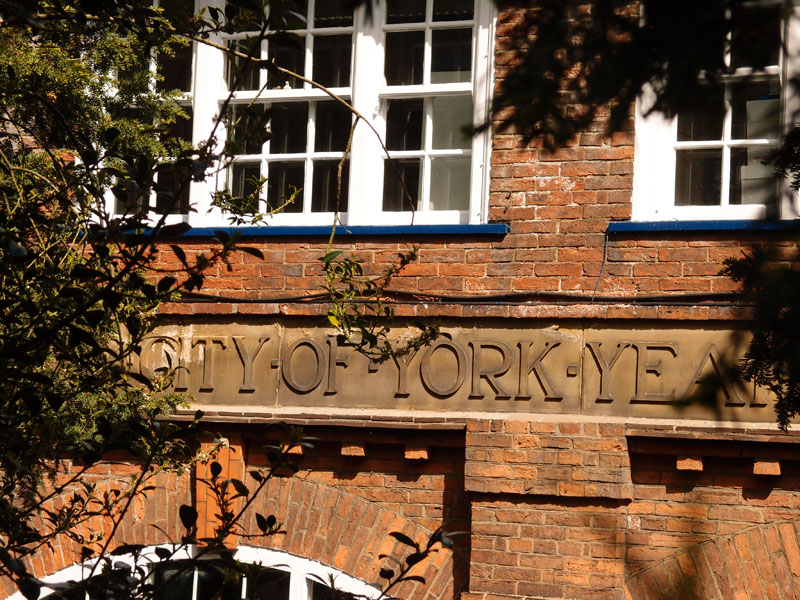 There’s real civic pride in this. It’s not just ‘City of York’, but THE City of York. A century before plastic signage and before places being called ‘Energise’ and Explore, baths were called baths and libraries were called libraries, and they often proclaimed it loudly, carved in stone.

This particular facility was another Rowntree gift to the City of York.

Sadly the lettering isn’t easily visible, and is hard to photograph clearly, because of large trees between it and the road. 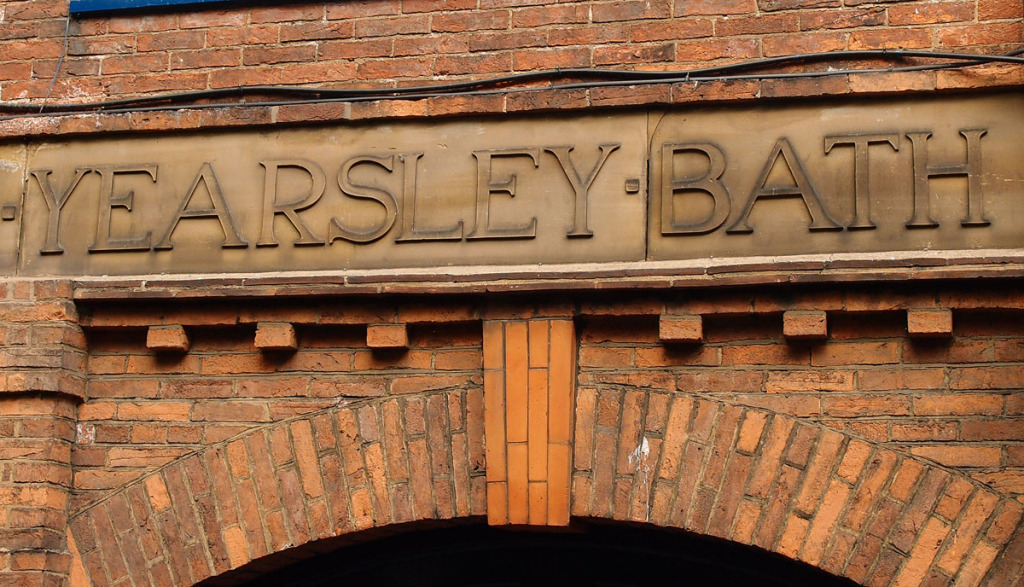 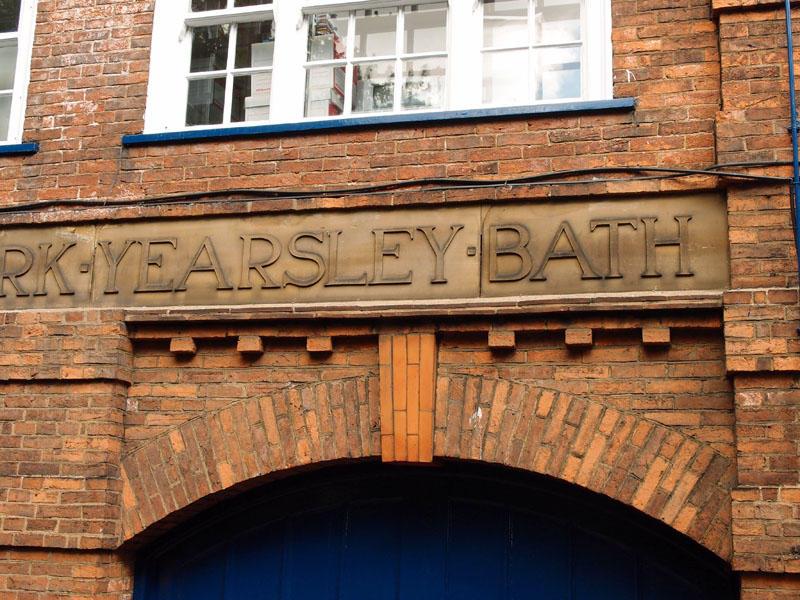 Though I am a bit of a tree-hugger, and would always prefer trees to be left alone, I wonder if the view of this fine lettering could be opened up a bit? But anyway, I just wanted to point out that it’s there, and note its handsomeness.

I was going to link to a very interesting and informative page on the City of York Council website which I’d discovered recently … but CYC have just redesigned their website again and the link seems to send me to a page about school admissions. Thank goodness for the Google cache. Here from the Google cache is the page ‘The History of Yearsley Pool’, which I thought I’d best include here in full, in the circumstances.

For decades the people of York used the same area of the River Foss for swimming and cooling down during the hot summer months. Simon Luck, Manager of Yearsley Swimming Pool, tells the history of the pool…

The very first swimming facility in York , called Yearsley Bath, was opened on 19th September 1859 and was actually situated in the River Foss, downstream from Yearsley Bridge and the Fever Hospital .

It was about 100 yards long and had a brick bottom, with wire netting stretching across the river at either end. Stone steps led down into the water from the riverbank, complete with an iron handrail.

Two wooden huts were used as changing rooms. The current Yearsley Swimming Pool was built in 1908 by Rowntree and Company Ltd and gifted by deed to the citizens of the city of York on 4th May 1909.

Since its original opening, and to this day, Yearsley Pool has maintained a close relationship with The Rowntree factory, now Nestlé UK Ltd. The Pool still relies on the goodwill of Nestlé to provide car parking facilities at the side of the building.

Over its long history many pool improvements have been made, however some of the existing Edwardian features still remain giving the pool character even to this day. In 1949 a water filtration plant was added at the rear of the building.

Between 1964 and 1965 the pool tank was enclosed for the first time when a roof was added.

In 2007 over £1.1million was spent on improving the facility, the pool closed for four months for a major repair and refurbishment programme. The improvements maintain the character and features of the old Edwardian Pool whilst giving the pool a new lease of life for the future. The improvements replaced the roof, plant room and modernised the showering and toilet facilities whilst also making the building more accessible.

In 2012 the pool closed for 3 weeks over Christmas in this time a new gas boiler plant was added to provide heat to the pool, pool hall and showers this replaced an old steam supply which had previously been used to heat the pool.

Over the years the pool has maintained an enduring appeal and has always been held in great affection by the generations that have been privileged to swim at the pool. The pool is currently used by around 12,000 visitors per month and continues to be used by people young and old and people learning to swim through to competition swimmers, many of whom have reached world and Olympic standard.

Yearsley Pool is part of York’s proud heritage and remains the only Edwardian 50 yard pool in the north of England.

By Lisa @YorkStories • 29 May 2015 Buildings, Details, Signs and symbols To link to this page's proper location please use the > permalink.