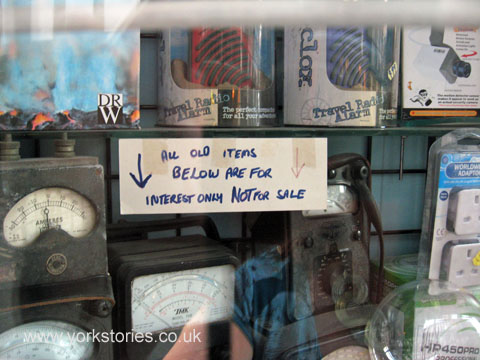 ‘All old items below are for interest only not for sale’ reads the sign in Ernie Roy’s shop window on Patrick Pool.

It’s only a small shop window, and old-fashioned and with many small panes, and it’s difficult enough to make out what’s on display. In the current climate, with competition from the internet and out of town stores, and so many city centre shops closing, you’d expect the owner to want to make the most of the space available to display the goods he sells. But no, these things are for interest only. His window is a brief respite from the profit-obsessed big-windowed shopping world we’re more familiar with now. 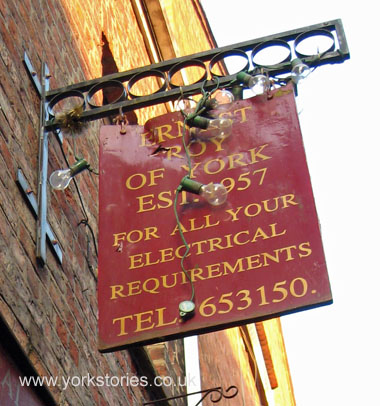 As we’ve seen many long-established local businesses close in recent years it’s rather reassuring that Ernest Roy’s is still here. The sign outside says it was established in 1957, so must have looked after the ‘electrical requirements’ of many generations of York folk. Actually, if it’s been ‘Ernest Roy’s’ since 1957, I imagine the current owner isn’t actually ‘Ernest Roy’ but I’m going to overlook that and call him Ernie Roy, as everyone else does. 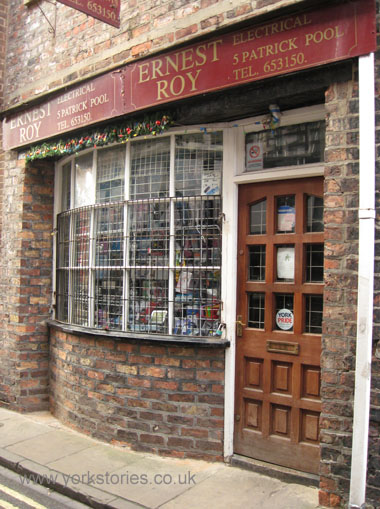 Like Army and Navy stores, this has always seemed to me like a manly kind of shop, where men go in with mysterious electrical gubbins to see Ernie for a replacement. ‘Ernie Roy’s will probably have one’ is still I’m sure heard often in many York households, as it is in ours. But the man of the house usually goes, as he’s more confident about electrical bits and pieces than I am.

Personally I’ve only been in once, to buy a computer mouse. Or rather, I went in to buy a connector for an old mouse, but Mr Roy didn’t have them, though he knew what I meant, as I think he probably knows about everything electrical old and new. Instead I bought a very reasonably priced new mouse, had a chat about the virtues of the laptop touchpad versus the old-style mouse, and went away thinking that had been much nicer than a trip to PC World would have been.