It seemed an update to the Wanderings bit was overdue. After visiting the newly-reopened Bay Horse on Marygate and admiring its exterior, I thought I’d continue towards the city centre, to check on other architectural happenings and building-related matters. 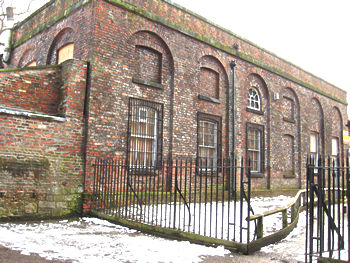 This building, in the Museum Gardens, by the river, has been obviously empty for some years. It’s struck me as I’ve been making this website how many buildings in any town or city have histories that most of us are unaware of, particularly in somewhere like York, so full of the dramatic and ancient buildings that the tourists come to see. This building is Grade II listed, and is the former engine house for the York waterworks, once based at the adjacent Lendal Tower.

Plans have been submitted in recent years for a restaurant development that would involve reuse of the engine house, with a modern extension. I’m not sure what stage things are at with that.

The waterworks relocated to Acomb Landing around 1850, and the engine house was then part of the York Waterworks offices, until the late 20th century. 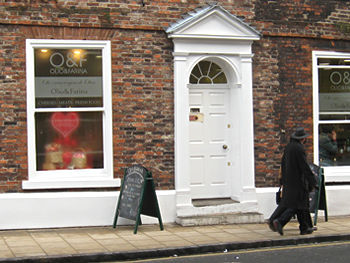 Dashing up onto Museum Street and around the corner onto Blake Street, here’s a photo of a recently opened business, opposite the Assembly Rooms, in the old House & Son premises. This building has been redeveloped, and looks rather classy, frontage kept intact, but considerably smartened (I do though rather miss the nice old painted signage from the House & Son days). It’s now home to Olio & Farina. I’m assuming the interior is as handsome and stylish as the exterior suggests, but hard to tell when dashing past, as the windows are steamed up, and I thought it would be uncouth to press my nose against the window for a better look. 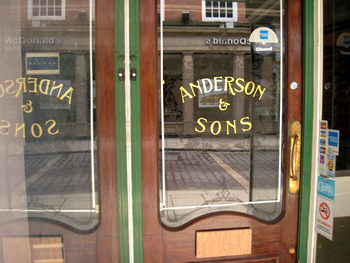 I was heading for this shop, just along the road, as I’d noticed recently the beautiful old gold lettering on the door. This is another long-established business that has recently closed. As a person of the female gender, I’d never been in Anderson’s menswear, but had noticed its traditional-looking shopfront, looking increasingly reminiscent of a bygone age, as all around it changed, and New Look opened just along the street. Around the gold lettering, and the worn wood, and the brass door handle, the glass door reflects the plastic lettering of McDonalds, opposite. Anderson’s was founded in 1763, and had been in these Blake Street premises since 1968. 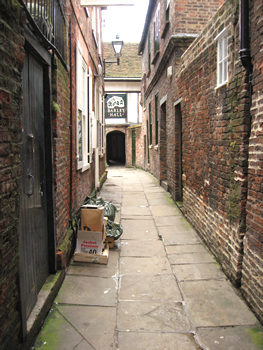 A quick left turn then into Stonegate, famous shopping street, full of interesting architectural details that I must remember to do a page about some time. Then right, into this alleyway, Coffee Yard. It’s these narrow alleyways that for me feel more like real York. Despite the popularity of the Snickelways book, they’re still generally a quick shortcut, without huge groups of tourists standing about in them and pointing at things, and they’re quieter than the shopping streets, and I use them all the time. The slight grubbiness of many of them feels more authentically ‘historic’, like old medieval streets. The other end of this alley was covered with rather more modern littering – cigarette ends. Major fag end littering is a fairly recent phenomenon, of course, a by-product of the law change. 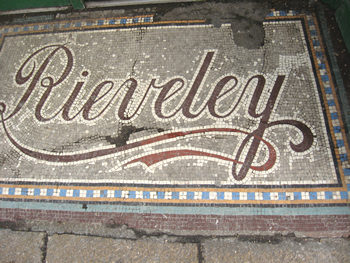 I was heading for Hungate and Peasholme Green, when, dashing along Colliergate, I noticed this groovy old tiling in a shop doorway. Funny that there are still so many things I’ve completely failed to notice, despite so much wandering. Particularly things at floor level. Perhaps since I broke my wrist I’ve developed a tendency to check the floor more for possible tripping/slipping risks, not wanting to break the other one. In any case, this tiling tells of ‘Rieveley’, presumably an old long-forgotten store or business. (A quick bit of internet research suggests Mr Rieveley of Colliergate was a corn and flour dealer, listed in a 1913 directory.)

In the old days, a mosaic tiled doorstep spelling out your business name was obviously seen as a worthwhile investment. I guess it reflects a certain confidence in the durability of your business. Reflecting different times.

As I’m walking through the city centre I’m wondering if the recent economic situation will be obvious in terms of building activity. As I approach St Saviourgate and Stonebow, things seem as busy as ever on the building front. 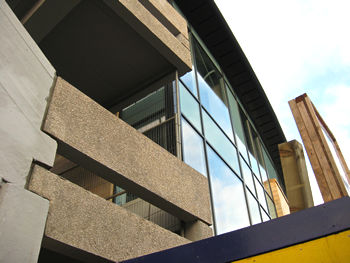 ‘The shock of the new’, as I passed Stonebow House. After all those old soft-hued, worn brick buildings above, here’s a bit of 21st century York, next to a bit of 20th century York. Next to the grey concrete of the Stonebow building, a new shiny glass thing has arisen, on a patch of land that seemed to have been an empty building plot for a long while. Once they start they seem to erect with astonishing rapidity. Certainly doesn’t feel like development is grinding to a halt. Think this must be commercial premises, rather than flats. But never fear, in York you’re never far away from an apartment, and there are plenty just over the road. 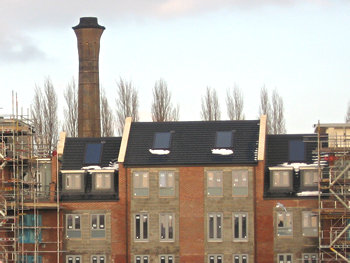 Hungate is an interesting area, what with the archaeological dig on one bit, and all kinds of new apartment blocks on another bit, and even an ever-changing outdoor art display – a clever use of the rather nice curvy bit of hoarding that runs through the centre of the area. The artwork has changed from last time I was here, and the buildings have risen over on the far side, in front of our old power station chimney, which still stands proudly on Foss Islands, standing guard over the new Morrisons supermarket.

This wander continued, towards Ogleforth.