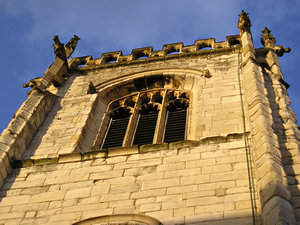 It’s a fine midweek evening in April, about 7pm. The city centre is just right – fairly quiet. I’m feeling like a lucky person. Not because anything major has happened, but just in that way you do sometimes, when the weather’s nice, and you don’t have any pressing concerns, and you’ve got an hour or two to do just what you like. I hope we all feel like that sometimes.

I’ve just been for a wander along the city walls, and continue wandering. I don’t know if it’s something peculiar to older cities, but I notice here, so many times, how if you start a wander through York in that kind of pleasant, unworried, unhurried mood, you can end up transported to giddy happiness just by the rightness of it all. For instance – 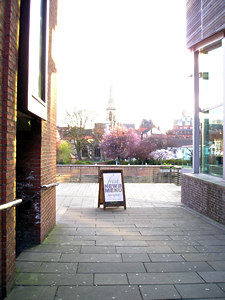 I remember when you couldn’t get to the riverside alongside Coney Street – it was just the local paper’s offices, and the shops, and a couple of grim alleys to the back of the shops. The City Screen development changed all that. Now, wandering along Coney Street, you get to the side of the church of St Martin-le-Grand and there’s an interesting wide walkway area. The City Screen is ahead, with its list of films showing. To one side of it, this enticing brightness and openness of the river, and a glimpse of the opposite bank.

That view in itself is uplifting – particularly because of the spire of All Saints church, and particularly now because of the blossom on the trees in the riverside gardens. But best of all, this particular evening, the church bells were ringing from St Martin-le-Grand. It reminded me of a line from an REM song – "sky blue bells ringing" – which in four words sums up a whole feeling, I think. (Though perhaps the song is actually about something quite grim and that line’s not supposed to be uplifting at all – never sure with Michael Stipe.) 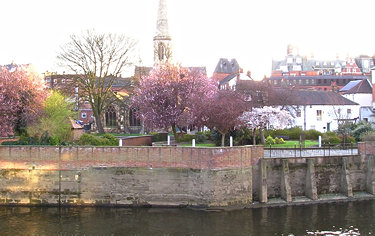 The brilliant thing about that walkway above is the way you’re rather closed in by the church and the cinema and cafe buildings, all very tall (and in this case, with the sound of bells bouncing off them rather pleasingly) and then suddenly you’re in a big open space, on a platform at the side of the river, and this is the view looking straight across.

The contrast is so effective. They’re clever, these architects, aren’t they. 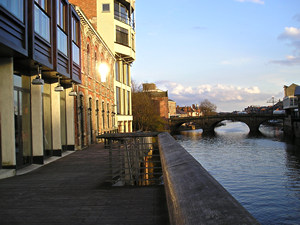 Looking to our left – towards Ouse Bridge. The low late sunlight bounces off the window there on the old Ebor Hall building, between two modern buildings. Behind me there are a couple of people sitting outside the city screen, at the cafe tables. In summer this balcony would be full. I’ve just noticed the beautiful wooden handrail here. It could have been some nasty modern metal thing, painted in some gaudy colour.

Instead it’s nice worn wood – oak possibly – with the sheen that, I imagine, comes from years of happy drinkers and river viewers resting on it. 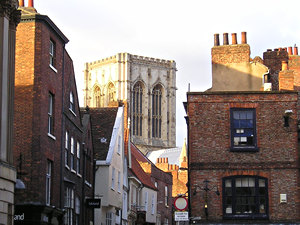 Leaving the riverside, and heading for St Helen’s Square. In the evening – or indeed any time – this is I think one of the most attractive places in York. Standing outside the Mansion House and looking towards Stonegate – this photo shows the buildings of Stonegate with the Minster at its far end. The buildings of Stonegate lean strangely in places, in a higgledy-piggledy huddle, and here I’m struck by the jumble of chimneys on the right.

Again it’s the contrasts that make it so uplifting – the dark and narrow street with the sunlit cathedral beyond. 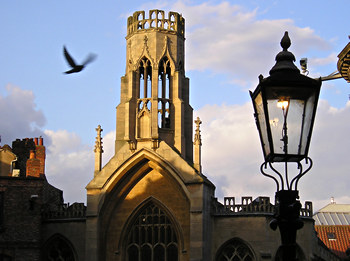 St Helen’s church, the centrepiece of the square. And a rather fine street lamp, both in front of an equally fine blue sky. As I took this photo a huge flock of pigeons took off with a massive beating of wings, and one was captured on this photo.

It’s funny what the camera captures that you don’t notice at the time. As I was standing there with my camera, another one was pointing at me – a CCTV camera on the top of the building, right, just behind the ornate street lamp. 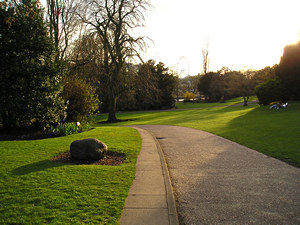 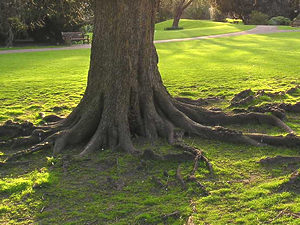 Ah, the Museum Gardens, in evening sun. Sometimes I’m sad that I can’t include with these photos the sounds I heard at the time – like the church bells – but on this occasion it’s a good thing, as there were some rowdy folks just ahead of me swearing a lot and arguing. Still, it looks beautiful. I love this time of year, with all the new green, and the way the evenings lengthen out. 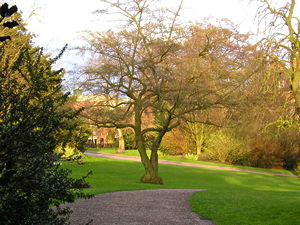 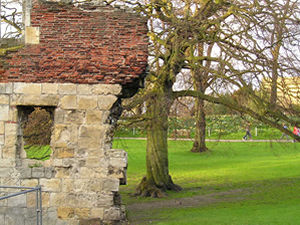 The trees show their shapes still as in winter, but with all the bright green below and around them. 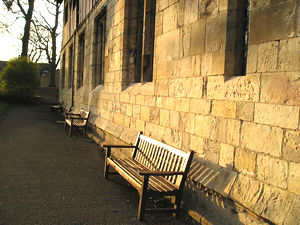 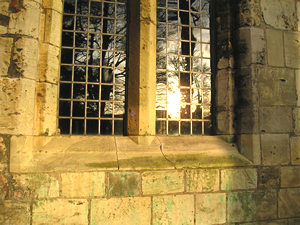 I noticed the sunlight on the old stone of the Hospitium. Its timbered top half appears on many photographs, but its ground floor stone looks more beautiful this evening, in the late sunlight. Benches thoughtfully provided, though all empty. It’s a bit too early in the season for Yorkshire folk to be sitting about sunning themselves on benches. Still all wrapped up in big coats. Me included. 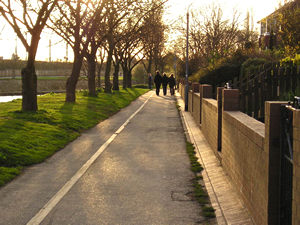 Leaving the Museum Gardens, there’s a walkway along the riverside towards Clifton, and in the evening, walking this way, it’s like following the sun as it sets. In front of me a group of people were walking. Obviously just taking in the air, and not heading anywhere in particular, as when they got further up river they turned round and came back again. Just out for a wander, like me. 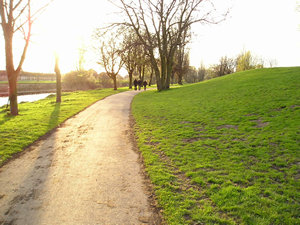 I was walking behind them thinking about how people have, for a couple of centuries at least, made a point of walking along riverside paths, to take the air. I assume that this custom started amongst the richer folk, who had time to wander around enjoying themselves and doing nothing in particular. Now, in 2006, it’s just ordinary people like me who can go wandering by the river, then turn round and walk back again, for no reason.

Those ancient buildings have soul, but so do some of the modern ones I see. The streets may be full of litter, but at least they’re not drowned in smog. People from all walks of life wander by the river. Clever architects have remodelled old buildings for a new century, down by the river by Coney Street. In the present, there are still bellringers ringing church bells. So many things to be happy about.

Particularly now, in spring, when everything old is new again.