Continuing my city centre winter wander, I went on my way from busy Hungate, up through Aldwark, where the back of Hilary House – even uglier than the front – stood as a reminder of what past developers have been able to get away with chucking up in the middle of our streets.

In the late afternoon sun of this cold winter day all the cosy-looking homes of the Bedern area development huddled in their courtyards, behind an old characterful bit of wall that had been retained from a historic building, behind a handsome well-proportioned house, also historic, also retained. (There are no photos of these bits, I was too busy pondering while wandering.)

The word ‘gentrification’ came to mind, as it often does when I’m walking around York’s centre these days, looking for the bits that haven’t yet been ‘improved’ or remodelled. (The toilets perhaps, they’re as rubbish as they ever were. But with little photographic potential.)

The landscaped planting of Aldwark and Bedern, and the Minster seen in a glimpse through rooftops remind me I shouldn’t be negative (there are no photos of these bits either, I was still too busy wondering while wandering).

Everything has to change and evolve. There are nice new shiny bits everywhere, stylish boutiques, revered restaurants. I might have liked all the scruffy unkempt corners, factories, falling down warehouses and foxgloves growing in the dust, but I suspect I’m not normal or representative, I’m a weirdo who wanders around taking photos of old brick walls and rusty things.

Wandering and wondering still, I cross Goodramgate and arrive at Ogleforth.

Obviously development is underway. I knew it could only be a matter of time.

One side of Ogleforth looks like much of York city centre looked in the 1970s and 1980s. It’s a bit random and ramshackle, with the backs of buildings that were obviously just functional, industrial, and a couple of handsome, interesting buildings, inbetween car park gaps. When I wandered down here with my camera five years ago (see York Walks page) I loved the fact that we could still have a street like this, and particularly in the shadow of the Minster. Like tourists never came here, and House and Son electricals stacked up their utilitarian washing machines and the like by their warehouses. Since then, House and Son closed. It’s taken a long while, with planning applications and revised applications and the usual, but Ogleforth’s gaps are being filled in. 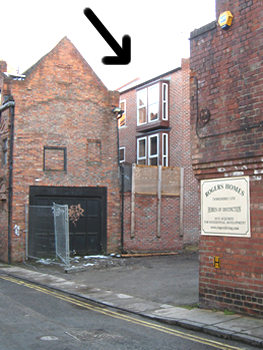 I was rather confused by the beginnings of building work here. Just behind the interesting 17th century building known as the Dutch House, this new build has been inserted. I had to visit twice to take photos to convince myself I hadn’t gone finally totally mad and hallucinated some more apartments, having seen so many emerging all over town. I’m not sure if this is a dwelling – perhaps this part is just some kind of entrance block? – as the nearby areas are apparently due to be built on too.

It appears that this new building is only a couple of metres from the back of the Dutch House, its windows looking out onto brick walls. I suppose at least they’re historic brick walls. These windows must be facing north/north east, so have little direct sunlight anyway, even if there wasn’t another building in the way.

Unless I’m missing something, this new building is also rather hemmed in on its other sides, with very tall buildings to the back, and to the other side, the back of shops and restaurants and pubs. There can’t be much space between them, I guess. But then I’m just an opinionated amateur, what do I know.

Nearby, also on Ogleforth – I’ve admired this building since I first wandered up here with my camera years ago. It’s not particularly historic, in York terms of reference, and I don’t know much about it, apparently it was part of a brewery, originally. I just like it, it’s kind of honest and utilitarian but pleasing to the eye too, probably because of that big curvy window and its general proportions. My quick research suggests it’s going to be demolished as part of this development. I also found a better description of its charms, courtesy of Keith Daggett, quoted in a Press article: ‘an emphatic range of windows, an oversized lunette and a distinctive profiled parapet’. (York Press – Historic brewery faces demolition …)

I assume they’re going to build apartments here. It seems odd that building work on this site and others continues in the current climate, as we have so many apartments in the city that even the Apartment-Loving-King of Apartment-Loving-Land would be overwhelmed at the choice available. 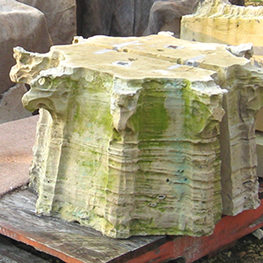 Heading homewards now, turning the corner into Chapter House Street, with its cobbles and coldness as the sun sinks on a February afternoon, passing the gnarled trees in the gardens of the Treasurer’s House, where the topiary shrubs at the entrance are wrapped up for the winter.

Outside the Minster, as I head for home, pieces of stone from the restoration work. Catch my attention as they’re catching a little of the last sunlight of the day. Linking back to generations of masons and carvers who have worked on this building, reworked stones to replace old stones. For the cathedral that overlooks all the boom and bust, the tenements and the apartments, built and demolished, over centuries.