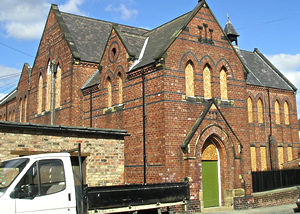 The Victorian building that until recently was St Barnabas primary school, on Bright Street, in the Leeman Road area. I don’t know this area very well, but my attention was drawn to this building after many letters of protest appeared in the local paper last year, following the submission of a planning application that would have involved – you’ve guessed it – knocking it down to build some flats.

Commonsense prevailed and the plans were rejected by the council last October. I’m not sure of the current situation – whether any new applications have been submitted. I thought though that I should go and have a look and take some photos. 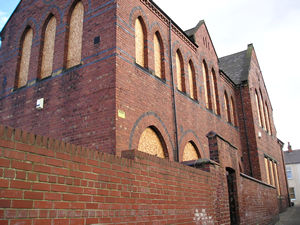 My first view of the school was from what is actually the back of it, approached via an alleyway, over which it suddenly rises, taller than the surrounding houses, and quite impressive – even with its windows boarded up. It has that kind of reassuring solidity that so many Victorian school buildings have. The contrasting dark brick emphasises its elegant arched windows. 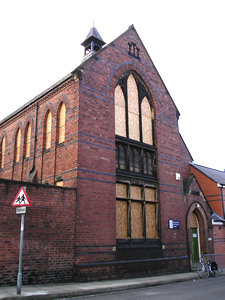 A letter from Anne Layram to the local paper the Evening Press, praised the building’s design: "based on the repeated pattern of three pointed windows beneath a roundel, culminating in Bright Street with splendid tracery on three levels, the upper trio incorporating the original stained glass."

Unfortunately the boarding over the windows means we can’t see the window glass, but we can appreciate the repeated pattern mentioned.

The letter also mentions the "beautiful and exquisitely delicate bell-tower."

The building isn’t listed – or at least it wasn’t, when the planning application to demolish it was made. I imagine that there may be attempts underway to get it listed status. Its defenders are right – it’s an important building in the heart of this community, and should be reused, hopefully to the benefit of the community. 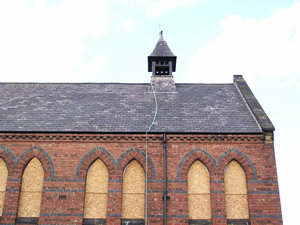 Many people, including local councillors, highlighted the importance of landmark buildings like this one, particularly Victorian municipal buildings. I think most of us prefer to live in areas that aren’t just filled with houses, but have buildings that vary in function and in scale. Otherwise the view gets very dull. Particularly if they replace buildings like this one with what the letter-writer already quoted refers to as "breeze-block tat". I think many of us reading that phrase would have been nodding in agreement. 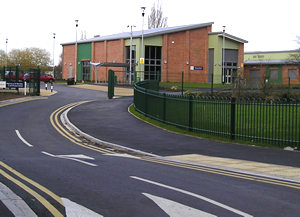 A new school has been built to replace the old Victorian building. The new St Barnabas primary school is on land by the riverside, at Jubilee Terrace, behind St Barnabas Church. It was funded through a Private Finance Initiative (PFI) scheme. 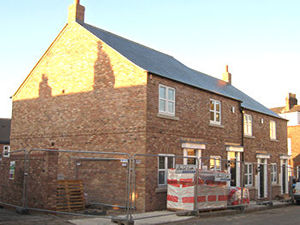 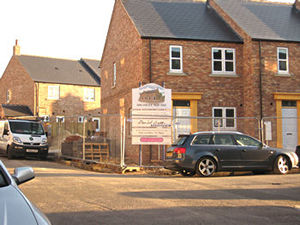 The Victorian school building has been demolished since I was last up this way, and the site redeveloped with housing. At least these aren’t more apartments – we have enough of those.

It might have been nice if the area had been left open as a place for children to play, maybe with a tree or two. But that’s just hopelessly idealistic, isn’t it. As far as I know, it’s a long time since anyone made a gift of parkland to the citizens of York – the days of benevolent businessmen are apparently long gone.

The Press: Is York’s apartment-building boom coming to an end as developers seek switch to more family houses? (May 2009)