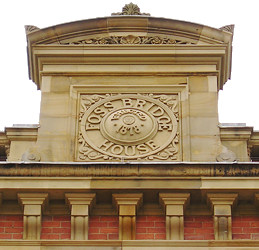 Foss Bridge House is a landmark building at the top of Walmgate, where it joins Fossgate at the bridge. It’s a big confident Victorian building, built in the 1870s. In the later twentieth century it was occupied by Stubbs the ironmongers for many years, then empty by 2004, when I first visited, on one of my first wanders with my camera around York, on 21 January 2004. See York Walks /1: Foss Bridge House for a few photos of how it looked then. 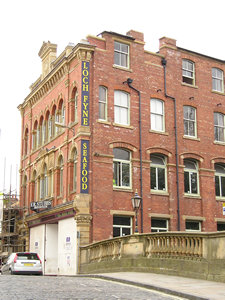 It’s a Grade II listed building, and the English Heritage records tell me that it was built for W J Whitehead & Co, linen drapers. It is of course well known that inside, on the ground floor, late 19th century shop fittings survive, including counters and drawer stacks. I remember being vaguely aware of an impressive interior when I called here once for some ironmongery, though perhaps I didn’t fully appreciate the historic surroundings.

Soon we should all have the opportunity to admire the Victorian fittings (well, those of us who can afford to dine out), as the old shop is to be a restaurant – Loch Fyne Seafood – as the new painted sign on the corner of the wall shows. The old fittings are apparently to be kept as part of the restaurant’s decor. Which is nice. 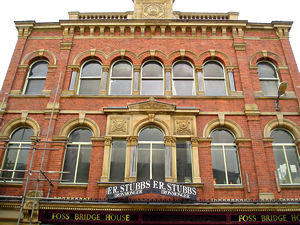 Look at that for a frontage. Smarter now than it was in 2004, possibly because it’s been cleaned up and bits repainted. (It still has the Stubbs signage – I’m not sure if that’s staying for good. If so, I imagine there’ll be the occasional confused visitor or recently arrived resident absent-mindedly wandering in looking for ironmongery. It might even be me. My memory’s not what it was.) 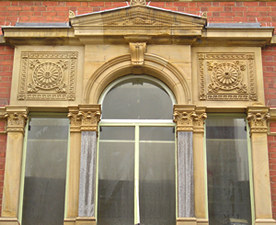 I must admit to finding some of the architectural terminology rather difficult to get a handle on. But I can just about understand what EH records say of this part of the building: "On first floor, central windows treated as pedimented Venetian window between coupled squat Corinthian pilasters with keyed moulded central arch and carved frieze over side windows." 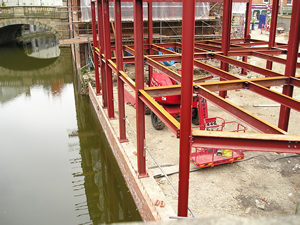 As far as I know, everyone’s happy with the way the conversion of the old building has been tackled, but the plans for the site at the back of the building were more controversial. It’s not difficult to see why. Behind Foss Bridge House was a car park area and I think maybe some outbuildings – I can’t really remember, but I know it wasn’t very tall or big. But it is now.

The framework for a development of flats is in place – I assume that’s what these steel girders are, and it’s the same height as the old building – ie tall. 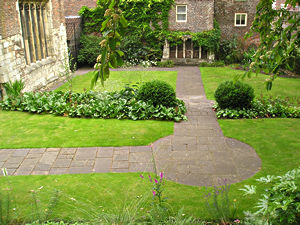 The major impact is on the Merchant Adventurers’ Hall, just across on the other side of the Foss, which has this nice little garden on the riverbank. Rather overshadowed by the massive building in progress on the opposite bank. It will be a lovely view for the people in the flats, but perhaps less pleasant for anyone wanting to sit in this garden.