When museums are free to enter, and the museums in one’s hometown are recognised as nationally important, it seems like looking a gift horse in the mouth not to go and visit them every now and then. So it seemed like time to pop into the National Railway Museum, to see a new exhibit – an ‘iron horse’ called Duchess of Hamilton. 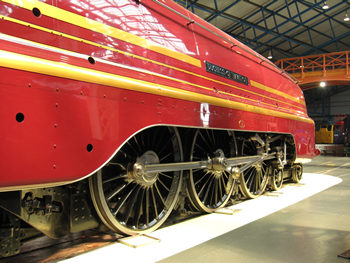 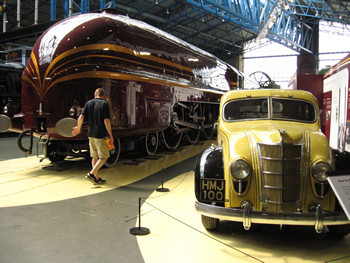 And very beautiful she is. Though just like last time I visited here, I’m surprised by how much I appreciate what I see when I get here. When this visit was suggested, I wasn’t excited as I might have been if we were going on a trip to look at a church with a Norman doorway, or some old ruin. It’s probably years of conditioning still there, suggesting that trains are a man’s thing, and that somehow I won’t understand what I’m looking at. But there are many different ways of course of appreciating this museum and its displays. There’s a lot of colour, and its all very shiny. Indeed I found myself wondering who cleans it all, all this gleaming paintwork and metal. (That probably is a typically female response, isn’t it.) 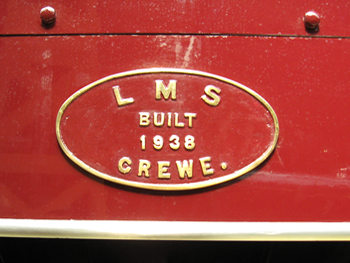 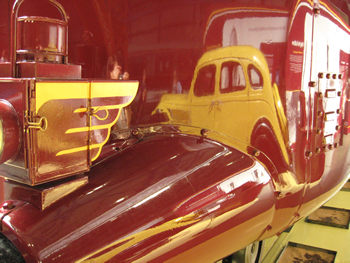 I could feel the commitment and the effort and the talent, in the way this particular exhibition had been arranged around this locomotive, putting it in its context, so it’s multi-layered, if you want the other layers. You could just look at the size of the thing and its handsome paintwork, and that would be impressive enough. Or you can read the information on display and look at the photographs and get a broader picture. And, because they’re good at this sort of thing here, there’s a car right alongside the loco, and it’s all tied together under the title ‘Streamlined – Styling An Era’. It’s classy, and it’s curvy. 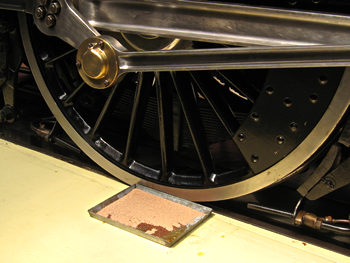 Indeed the whole place exudes passion and commitment, even after all these years. Because of course these old locomotives inspire passion and awe and obsessive interest. You can feel the love. It seeps out of the place like bits of oil obviously seep from these well-tended steam engines, captured by carefully-placed trays, filled with what appears to be cat litter.

Time to move on though, as I need to record another survivor from the 1930s.

Leaving the museum, we take a detour across the station, over the Queen St bridge. On Blossom Street, our Odeon, boarded up for some years, has reopened. It was built in the 1930s, like the Duchess of Hamilton. The rounded bit on the right there is I guess another example of the 1930s’ streamlining and curviness. Which we perhaps now appreciate, with the passing of the years. In my well-read Hutchinson and Palliser guide to York, published in 1980, I found the following: 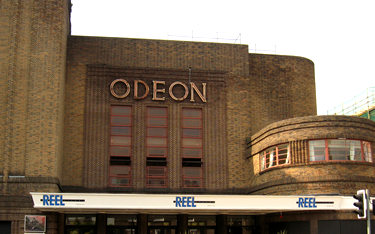 ‘The Odeon (1937) by Harry Weedon was always the best of York cinemas. In mellowed brick, its cubical design with rounded corners and little spurs will be more admired in a year or two. How long will it be before it is "listed"?’

It wasn’t long – the Odeon became a Grade II listed building in 1981. Many years later, in 2009, it’s rather cheering that it hasn’t just been preserved as a good example of a 1930s cinema exterior, while being turned into a bingo hall or a carpet warehouse, but has actually reopened and can continue to be used for its original intended purpose.