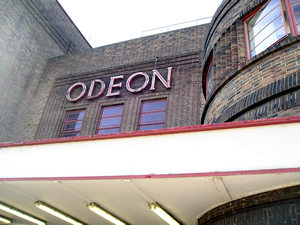 The Odeon cinema, Blossom Street, York – closed at the end of August 2006. These photographs were taken in April 2006.

I knew, from the local paper’s coverage, that things weren’t looking good for the Odeon, and that its closure – though long campaigned against – had been confirmed. On Easter Sunday, heading across York on a varied wander, I thought I should take some photos. 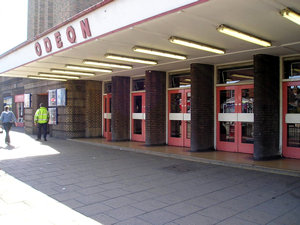 It was only when I got home – and was looking through the photos I’d taken – that this image had any effect. The sun wasn’t shining in the right direction (how inconsiderate) and I was rather distracted by technicalities of camera settings to have any thoughts while I was there. But later, I remembered – many times, queuing here, in front of those doors, mostly as a teenager, 20 years ago or more. For many of us, this cinema played an important part in our youth and our courting (a very old-fashioned term – and one I never used at the time, but I like it). 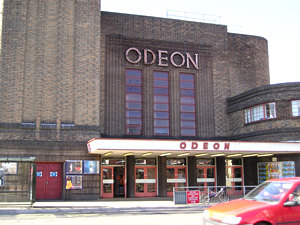 I know now that this building is a fine example of the Art Deco style, and can see what the Pevsner description means, about it being “blocky with rounded corners”, but in the old days I wouldn’t have noticed.

In the 1980s, I recall that there was another cinema we also visited – the ABC in Piccadilly – which I remember seeing during demolition. Unfortunately digital cameras hadn’t been invented then, so I have no record of its demise. 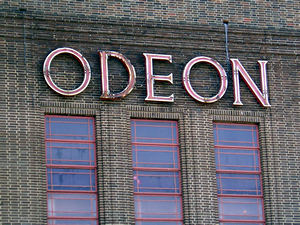 I’d be very surprised if the Odeon was demolished, as it’s such a fine example of its period, and is on Blossom Street, which leads to the famous “Micklegate run” of pubs and clubs. Old cinemas, like old Methodist chapels, have found many new uses. Clifton cinema is a bingo hall, Acomb cinema houses shops, Fossgate’s old cinema is a furniture store. We will see, in due course, what the Odeon becomes.
The local press reported on the Odeon’s last picture show.