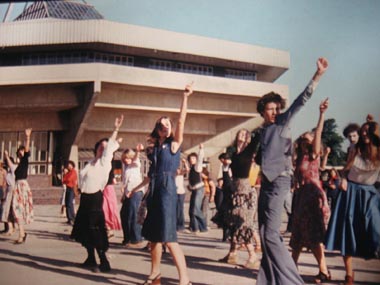 The University of York, in the summer of 1978 – 18 June. Students show off their ‘Saturday Night Fever’ style dance moves in the ‘Summer Spectacular’, their raised arms mirroring the lines of the Central Hall behind them.

Notable moments:
2.50 Cars driving down Stonegate. It didn’t become a footstreet until the following decade
3.05 Interior of St John’s church, Micklegate, occupied by the Institute of Architectural Studies. More familiar to many of us as the Arts Centre, in later years.
3.08 Kings Manor, many interior shots
14.45 Lord James of Rusholme, pipe in hand, talks about the university

Patrick Nuttgens describes its creation in York: the Continuing City:

‘Hundreds of trees were planted; the land was recontoured and drained so as to form a huge lake, twisting through the middle of the site and providing visual unity for the various university buildings. Within an astonishingly short period the University of York was able to present an apparently mature landscape with buildings and shrubs and grass, animals and birds and fish – as well as staff and students.’ 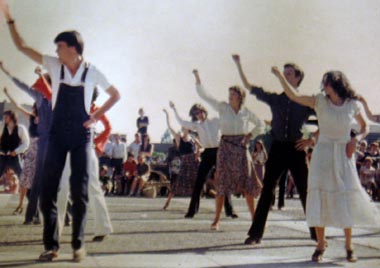 Another photo from the 1978 Summer Spectacular, featuring more dancing, and a man in dungarees. Younger readers perhaps won’t have seen dungarees before, but they were quite the thing around this time. No, no one knows why.

Thanks to Andy Tuckwell for these photos. More of Andy’s photos of the event are viewable in this online album.

I hope to get over to the university when the weather warms and brightens, to get some long-overdue photos of both the 1960s buildings and more recent additions.

For now, you may be interested in the excellent website they’ve put together to celebrate their first 50 years. And if the film or the photos have prompted memories, the university would like to hear from you. See this page for more details.

By Lisa @YorkStories • 19 March 2013 Happenings & events, On film
Tagged  1960s, universities
To link to this page's proper location please use the > permalink