I’ve not been back long from a short evening wander. My camera is malfunctioning and I had to resort to the camera on my phone. It’s a rather old mobile phone with a basic camera, so please excuse the quality of the accompanying imagery.

We’re in the Bootham area again, as I ended up wandering through the grounds of Bootham Park hospital. While passing the chapel in the grounds I remembered I’d never followed up on Silvanus’s special door.

Last year I included a page on the lost street of Union Terrace. It’s not completely lost – there’s a bit of it left – but it was at one time a long street, as can be imagined from the car park which now occupies the site of most of it.

Between the car park and the grounds of Bootham Park Hospital is a boundary wall, which presumably used to mark the end of the backyards of the demolished houses. 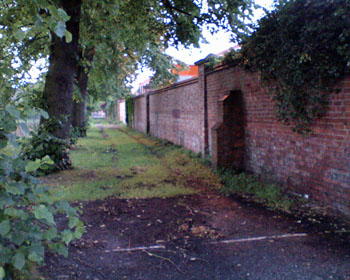 Silvanus Thompson once lived on Union Terrace, on the other side of this wall. The name might not mean much to most readers, but his son, Silvanus Phillips Thompson, is commemorated in a plaque on the front of Bootham School, not far away, and must have born here in Union Terrace.

The front of Bootham School, as its name suggests, is on the street of Bootham itself, but its grounds are large, and stretch back to near the hospital chapel, and the back of Union Terrace.

Silvanus Thompson was a teacher at Bootham School, and he and his wife took a house at 43 Union Terrace, and later also occupied number 45. It was presumably rather irritating to have to walk all the way round to go to work – onto Clarence Street, up Gillygate, onto Bootham – when he could see the playing fields of Bootham School from his back windows. So Silvanus got permission to make a shortcut. A document from 1867 in the Borthwick’s archives records that the committee of ‘York Lunatic Asylum’ (Bootham Park Hospital) grants permission for him ‘to break out and use a doorway through the wall of garden behind his house in Union Terrace on condition of payment of 1s per year, and to restore wall to original condition on cessation of occupancy.’

I was wandering by this evening, remembered this, and thought I’d have a quick look to see if there was any indication where the doorway had been.

No visible trace in the brickwork. But there were a couple of bits of graffiti. Including – amusingly, weirdly – a door. A 21st century painted echo of Silvanus’s door. 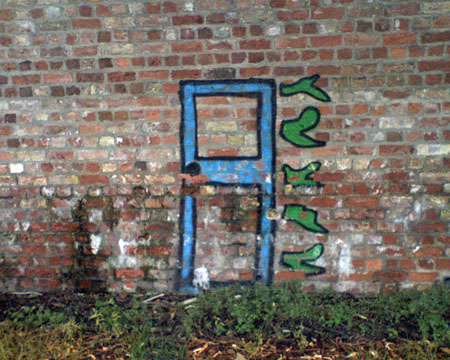