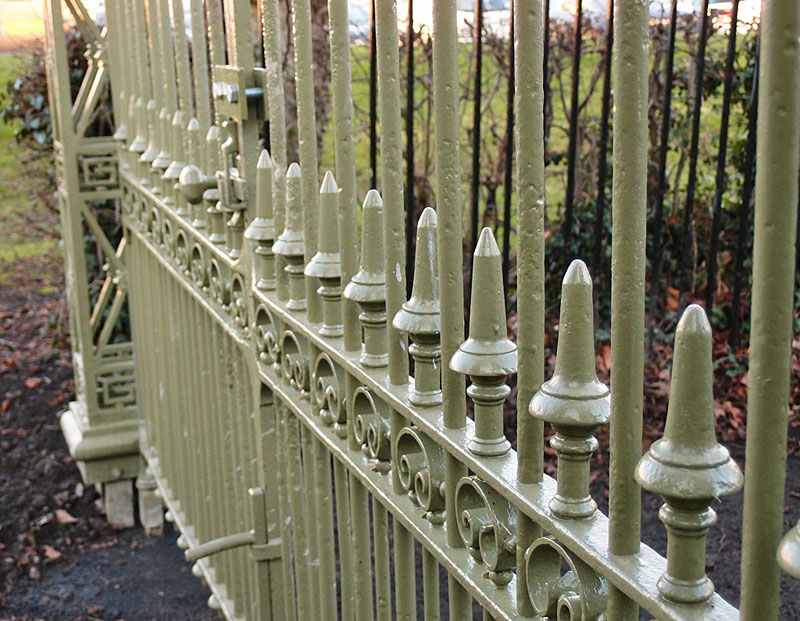 Long ago, way back in the mists of time — 2004 — I took a photo of some rusty old gates on Bridge Lane, the last photo on a fairly long wander through town. I don’t think the photo appeared in one of my York Walks pages on York Stories at the time, but many years on I got around to posting a page on the gates and gateposts, still there then, still rusting: Walker foundry relic on ‘Asylum Lane’ (2012).

Since then, very recently, they’ve been restored, so a revisit seems appropriate. I also have some queries about the land behind them.

But first, these gates. 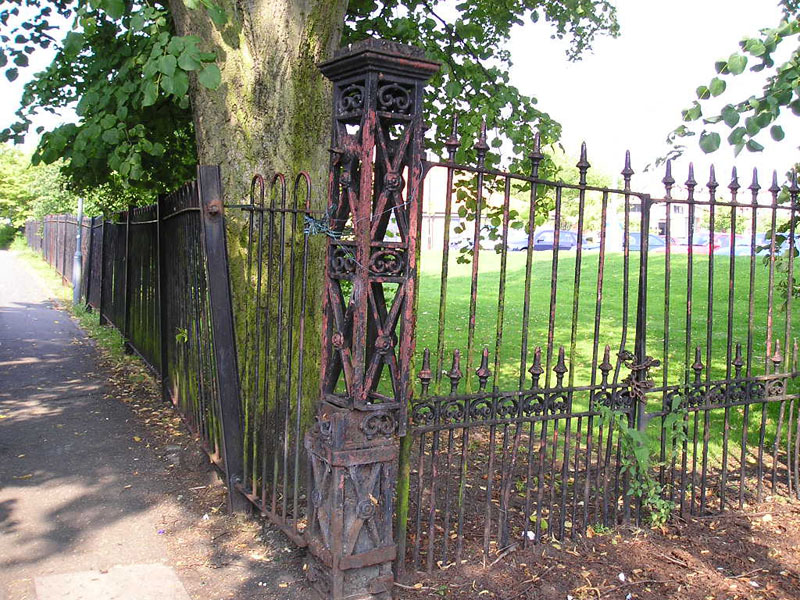 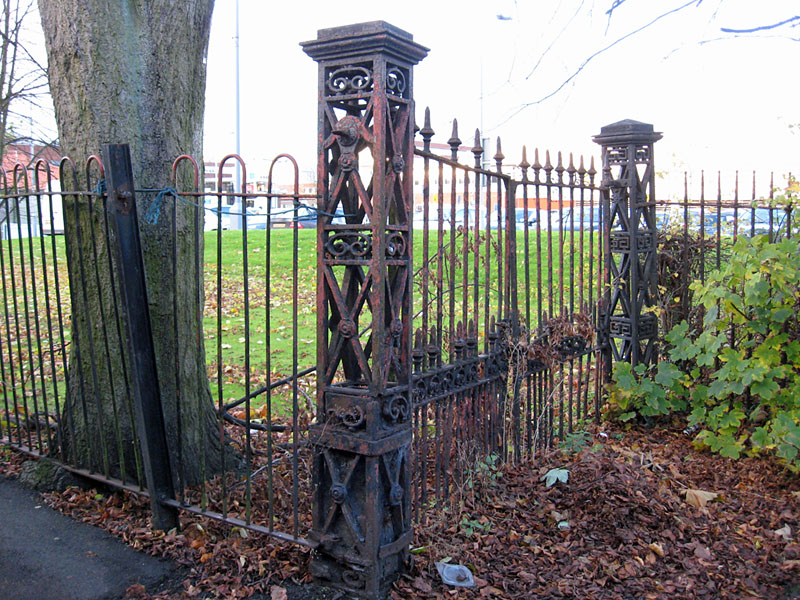 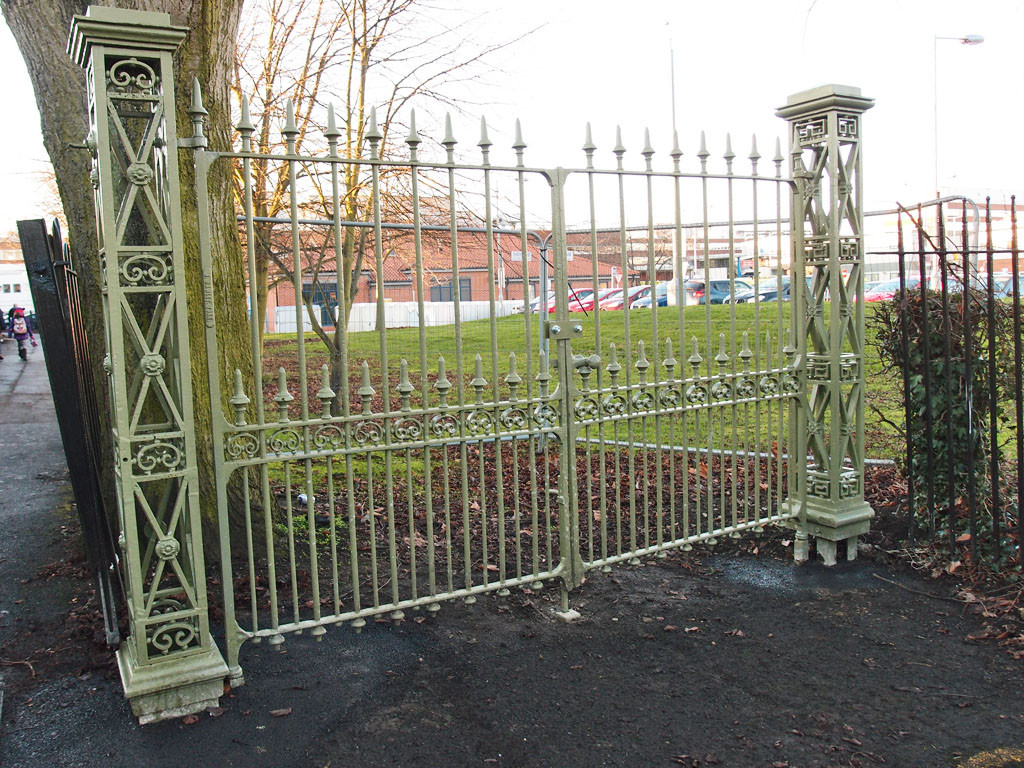 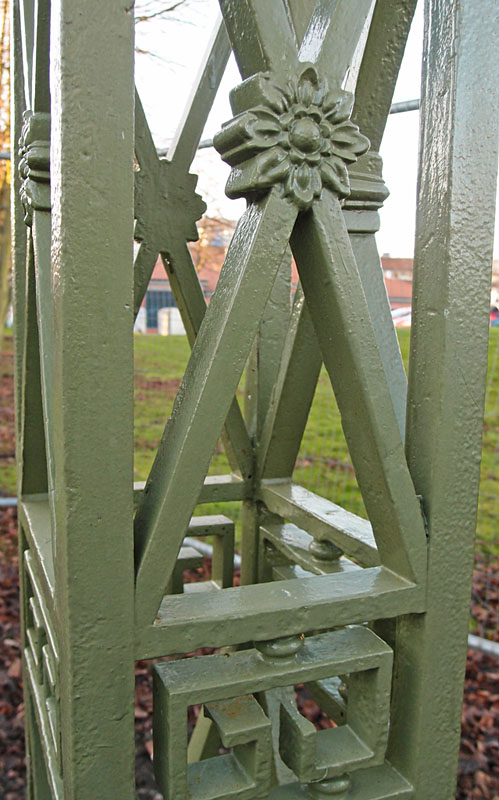 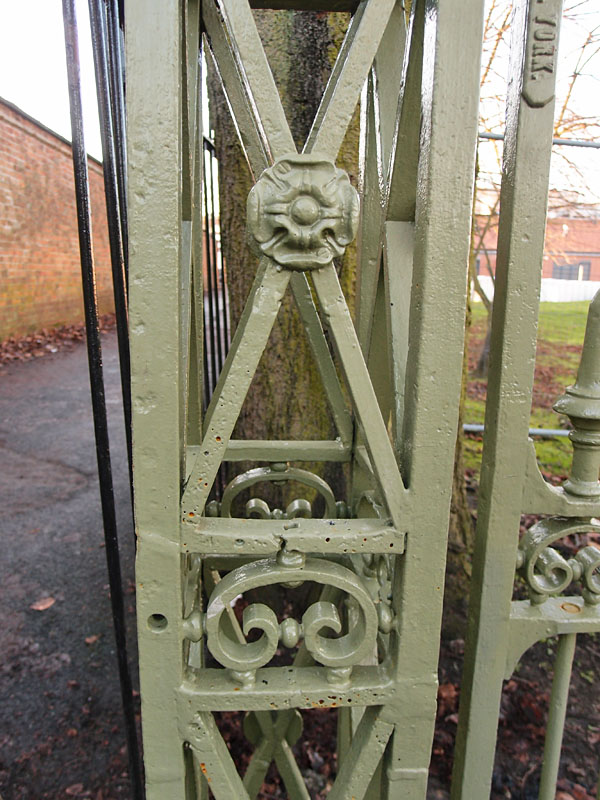 As previously mentioned, in a walk along Bridge Lane back in October, I’d noticed their removal and some helpful signs put up by York Civic Trust explaining that they were being restored and would be put back in due course.

It’s more obvious now they’re restored and repainted that the gateposts don’t match — they’re different designs if you look at the details of the scrolls and the flowers in the photos above. There’s probably a story behind this, but I don’t know what it is. Normally, with a pair of gateposts, you’d expect them to match one another.

More obvious is the change of colour. Personally I find the colour very pleasing, and think it makes sense to draw attention to the restoration by choosing something other than the more usual black.

Also interesting are the maker’s plates, which I hadn’t noticed before. They’re now clearly visible on the gates between the columns of the gateposts, but they don’t say ‘Walker': 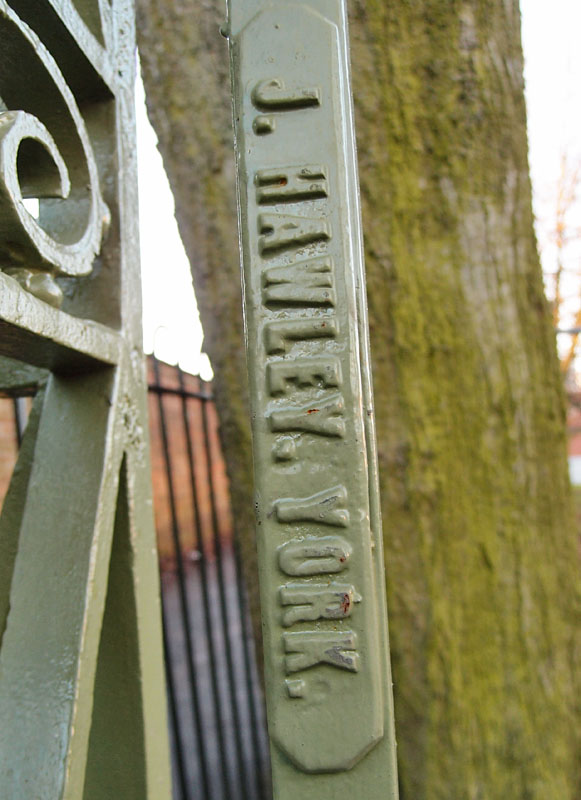 Nick Beilby, York Civic Trust’s Project Manager, confirmed that they were there before:

The gates were cast by Hawley’s who were brass founders on Walmgate, close neighbours of Walkers. It is likely that they carried out the work on a sub contract basis to Walkers. The ‘Hawley’ plates were found when we blast cleaned the ironwork.

The ironwork was restored by Barker and Patterson (Hull).

Leading to … playing fields, and ridge and furrow?

The gates don’t open now, but let’s imagine we’re pushing them open onto the land behind, before it was built on, when it was fields, and later, playing fields.

The land behind the gates is now occupied by the city’s hospital, and has been since the mid 1970s. But as previously mentioned on the earlier page these fine gates used to lead to playing fields, and two comments on previous pages, from Stephen and David, shared memories of this area at those times, which many other readers will remember:

At this time [late 1960s] there was a mature hedge on the opposite side of the lane to the wall, and beyond this a large expanse of grassland where the hospital now stands. I used to play football there with friends, and also remember York City would use it for training. I also remember watching a school rugby game adjacent to Wiggington Road between my school Lowfields, and Park Grove, who used the area as playing fields. There was a rudimentary changing hut next to the ornate gates mentioned in your article. I seem to remember it was oval in shape, and built of Asbestos sheets, rather like the garages of the forties and fifties.
– David Bower

A map available on old-maps.co.uk, dating from 1937, suggests that at that time the large area of land here was divided into several distinct areas of playing fields, with a smaller school sports ground to the right of these gates, a larger sports ground on what is now the southern part of the hospital grounds, and a separate cricket pitch to the northern area. This would be from around the time Stephen remembers it, I think.

A 1961 map (from nearer the time David describes) shows the school sports ground apparently absorbed into the main sports ground, with a small area marked as ‘playground’. There’s still the cricket ground to the north, and a bowling green and tennis courts also marked in this area. There’s also the rugby ground to the east (since relocated, site filled with housing), and the York City ground (still there) to the west.

Quite the ‘Sports Quarter’ back then, apparently.

But I’ve also read, in several reliable sources, that remnants of ridge and furrow were visible on this particular piece of land, into the 20th century. Bridge Lane was formerly known as Asylum Lane:

Formerly in Clifton, the largest surviving block of broad ridges within the city is on playing fields N. of Asylum Lane (around 60205300) measuring at least 300 by 200 yds. This clay area, at one time Laithe Close, has slightly sinuous ridges, 30 ft. wide and 1 ft. high. One parcel of ridges is aligned E.N.E. and another N.W.
– (source)

I’m wondering how that fitted with playing fields, which are traditionally flat. Presumably by the 20th century it was just a few bits around the edges, or perhaps football players had to battle with balls falling into furrows?

Historic Environment Record, a fascinating resource, local historic features mapped and described. This link may work to take you to the relevant point (though you’ll need to zoom in). The brown lines denote the ridge and furrow. Clicking on the relevant area takes you to the Heritage Gateway pages: see this link and also this link which includes the brief explanation ‘Ridge and furrow seen as earthworks on 1936 air photographs’.

If you’d like to be kept informed of new additions to this site please join the mailing list.
Please also have a look at supporting this site in 2017.

Lisa @YorkStories is the creator, administrator, and writer of content on www.yorkstories.co.uk. She can be contacted on this link or via Twitter, @YorkStories
View all posts by Lisa @YorkStories →
Tagged  Bridge Lane, iron
To link to this page's proper location please use the > permalink