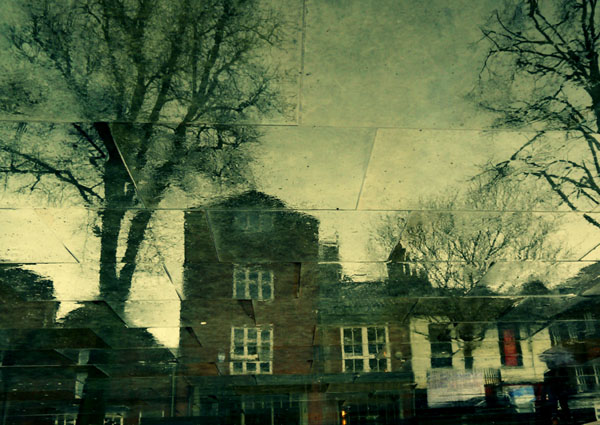 The ‘reinvigoration’ of King’s Square is due to resume soon. Attention so far has focussed on the new, expensive, mirror-like paving. I hoped the photographic possibilities its reflections offered would be captured by someone. Tony Cole has, in these beautiful photos (used with permission).

We can see trees reflected here. If the phase 2 work follows the original plan then the smaller tree will be removed. I wonder if they’ll carefully cut it to pieces or just go at it straight through the trunk with a chainsaw.

Never a nice sight to see, but happening more and more to trees in the city centre, for various reasons. Usually for reasons of safety, because the tree is diseased, or leaning. Neither of these things applies here. There’s nothing wrong with the tree at all. Have a look, if you haven’t already. (It’s actually the best looking tree of the four, in terms of shape.)

Its removal was approved because someone – who? – decided the planter it is in is aesthetically displeasing. This may have been Sir Ron Cooke, or Dave Merrett, or the Reinvigorate York group as a whole. 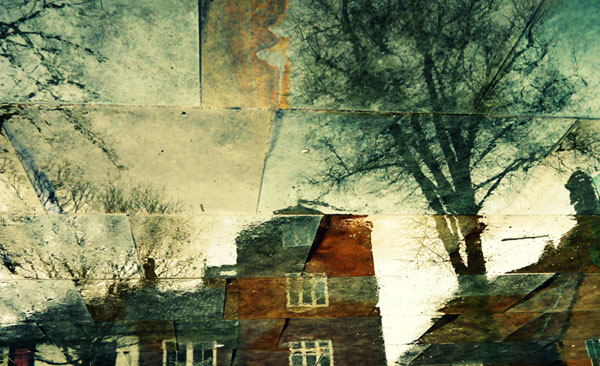 But, you may be thinking, we were consulted on the plans. Not about the mulberry tree we weren’t. Its demise had already been decided. I responded to the consultation, along with just under 200 other people, but probably didn’t mention it either. Because at the time I was busy with other things, hadn’t looked properly, couldn’t picture which tree it was, thought it must be not worth keeping, trusted their judgement.

When I looked properly later, and every time I’ve seen it since, I’ve wanted to challenge whatever ‘aesthetic’ judgement led to the decision that the whole thing needs destroying. 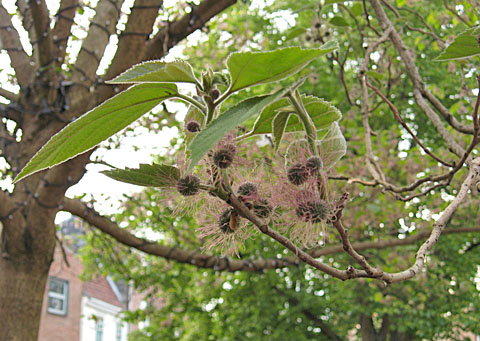 This tree which the ‘Reinvigorate York’ plans would remove is perhaps the most vigorous thing in the square. Certainly in summer, in full leaf.

It was planted in a ceremony mentioned in the Press (see below), and has a plaque marking that event. The plaque is on the railings, on top of the planter.

The whole ensemble does look ugly at present. But could so easily be improved, without chainsaws being involved.

The nasty railings could (should) be removed. The old Christmas lights still wrapped around the tree should have been removed long ago. Once the railings are gone, the litter and weeds and cheap-looking slate chippings around the tree’s base could be cleared away. Perhaps an ornate/attractive iron guard could be put there instead. 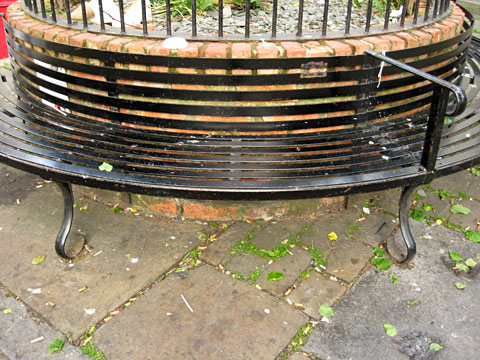 The bench, metal, curved, is actually rather elegant, or could be, if cleaned and repainted. Perhaps extended further round the brick planter, if the brick planter is thought so ugly. I’ve sat here often and thought it was more comfortable than the standard wooden ones, which seem to be for people with longer legs.

It might be, of course, that following the largely negative reaction to ‘phase 1′ of the work here in King’s Square, the original plans approved may have changed in some ways. Here’s hoping.

Even if you’re not a soppy tree-hugger like me, I don’t see how anyone can justify destroying this perfectly healthy young tree because of the planter it was put in. And even if you don’t care about trees in the slightest, everyone should be thinking about, and perhaps questioning, whose ‘aesthetics’ decide such things, and whether we’re all happy to leave them to it.

If we’re not, then we should be filling in the questionnaire/consultation about the next ‘Reinvigorate York’ initiative, which will be remodelling another square soon.

A NEW tree is to be planted in York’s King’s Square by a pensioner who remembers playing there as a child.

Joyce Douglas, 82, who is still a keen gardener, has been invited to do the honours at next Tuesday’s ceremony by City of York Council.

A weeping ash tree which stood in the square for 80 years was felled last year because of concerns over safety.

But a young mulberry tree has been given to the council by Lewis Tree Surgery of Wheldrake and this will be planted at a special ceremony by Mrs Douglas, who was born at 1 Shambles in 1919.

Her family ran the well-known George Ackroyd’s furniture shop and sale rooms at the top of Shambles.

She also remembers a church which stood near her home and said she often played in the churchyard that occupied King’s Square in the years of her early childhood.

The two remaining lime trees were also originally in the churchyard in the 1800s, well before the church was demolished in 1937.

Mrs Douglas said: “I was very disappointed when the tree had to be removed last year – I regularly walk through King’s Square and the trees bring some of the country into the heart of York.

“However I am delighted to be invited to help with this planting ceremony and hope that this new tree will bring much pleasure to residents and visitors in the future.”

Mrs Douglas will be helping the council to plant the tree at a ceremony with the Lord Mayor of York, Councillor Shn Braund, and the council’s arboricultural officer, Harvey Lowson.

Mr Lowson said: “We are honoured that Mrs Douglas has agreed to plant the tree and I would love to think that I will still be planting trees when I am in my 80s.

“The donated mulberry tree should make an attractive tree and not grow too large as the square is partially shaded by buildings.”

A safety inspection on the previous weeping ash tree in the raised brick planter last September established that it was in a poor structural condition and needed to be removed for safety reasons.

The new tree will have protective railings constructed around it and a commemorative plaque fitted to mark the occasion.’

People of York, we need to preserve Joyce’s tree, don’t we.

Plan of preferred final design – My understanding is that this is the design option approved by Cabinet on 2 April 2013, though what we have as a result of phase 1 of the work doesn’t look much like this representation. 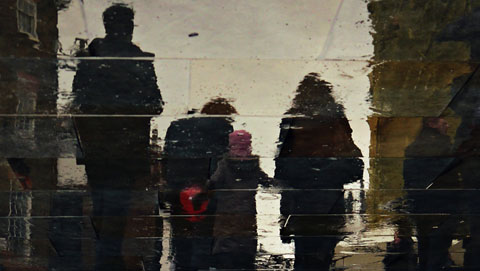 I emailed Guy Hanson at City of York Council on 28 Jan to ask about the plans for the tree. I emailed again a few days ago as I hadn’t heard anything (and wanted to know whether I needed to write this page, or not). I had a brief reply saying they’re ‘reviewing the proposals’ regarding the tree and will get back to me.

I thought I should write this page anyway, after what happened with ‘phase 1′. When I wrote so many pages, last year, about the planned changes, it appeared that no one else (or very few people) cared about the paving. Turned out lots of people cared. Maybe no one cares about Joyce’s mulberry tree, but if you do, perhaps you’ll want to email guy.hanson@york.gov.uk and cllr.dmerrett@york.gov.uk and say so.