Moving tales and many mysteries

This August an impressive large-scale production of the Mystery Plays is being staged in York, in the abbey ruins, in the Museum Gardens.

I’d like to highlight a smaller scale production, which won’t cost you any money to see, and which you can just turn up for, if you fancy it, without needing a ticket. 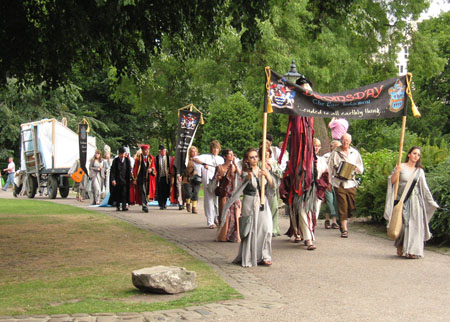 The Guilds of York regularly stage our famous York Mystery Plays on waggons. Two of the plays are being staged this Saturday and Sunday (11 and 12 August), around midday, outside the Minster. For more details, please see the website of the www.yorkmysteryplays.co.uk.

I have it on good authority that a specially designed ark will help tell the story of Noah and the flood ‘with a few genuine animal co-stars’.

Alternatively, for information on the Museum Gardens 2012 production, see www.yorkmysteryplays-2012.com.

No one ‘owns’ the York Mystery Plays, and in York there are now these two approaches to staging them. Some prefer the large-scale production on a fixed stage, some see the waggon plays as more authentic. 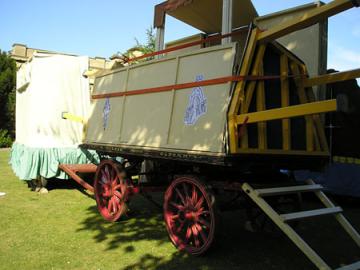 Perhaps most of us assume the ‘mystery’ of the title refers to religious matters. ‘God moves in mysterious ways, his wonders to perform’. But the word ‘mystery’ was used in medieval English to refer to a trade or craft, or to the groups the craftsmen belonged to – more commonly known as guilds. So there are references to the ‘Misterie of Stationers’, ‘the mysterie and companie of the Marchants adventurers’.

These guilds staged their ‘mystery’ plays on moving waggons in the streets of York, from the 14th to the 16th century, surviving records suggest. A tradition then abandoned, but re-established in our more recent history. 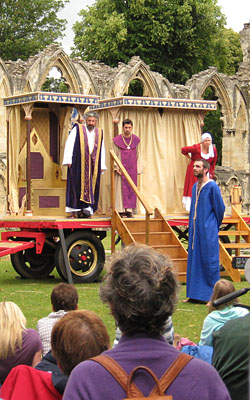 The surviving York guilds, together with local residents, students and church groups, have in recent decades staged the plays every four years, though you wouldn’t know it from our local media sources in recent reports. According to the prevailing view – repeated over and over in the local media – this year sees the ‘return of the Mystery Plays to the Museum Gardens for the first time since the 1980s’.

The guilds’ waggon plays have also been staged in the Museum Gardens, as recently as 2010. I know, as I was there, and here’s a photo to prove it. Like many others, I followed the waggons and procession, which was very cheery, as it always is, and watched the depiction of the crucifixion, which made me cry, as it always does.

If the reports referring back to the 1980s included the phrase ‘on a fixed stage’ or ‘on this scale’ it would be accurate. But they don’t, so it’s not accurate, and the lack of acknowledgement of those who have continued the tradition in recent years is to me the biggest ‘mystery’ of all.

The tradition of setting the plays on a fixed stage is a relatively recent one, apparently dating from 1951.

So York now has two traditions of mystery play – one on a fixed stage in the abbey ruins, and one every four years on pageant waggons. 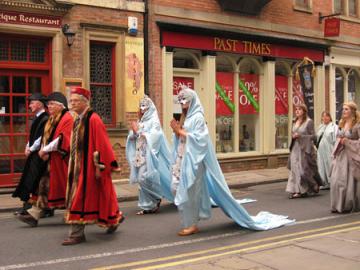 One of the most memorable aspects of the waggon plays is the way they move through the streets, accompanied by music, and followers who’ve joined in along the way. This movement through the city to playing stations in streets and parks connects to our ancestors’ experience of these plays.

The big production is also moving, in the emotional sense, so I’ve heard. Can’t fail to be. Anyone who can afford it should probably buy a ticket. I can’t afford it, but it looks like a truly spectacular production.

The next all-day productions of the waggon plays will take place in 2014. The short performance on 11 and 12 August will present just two of the plays.

And let me stress again, the plays presented by the Guilds of York are free to view – as they would have been, centuries back. If you get there early enough you can follow the waggons, accompanied by music, leaving the Museum Gardens around 11.15am.

Here endeth my page exploring some of the mystery of these Mysteries. We are very lucky to have two versions of our plays, so they’re accessible to all. Enjoy, whichever one you go to.

More information on the history of the plays: www.yorkbutchersgild.com

Photos, much more impressive than mine on this page: the 2006 production and from the 2010 production: The Road to Calvary and The Last Judgement. Rather handsome, don’t you think.

See also: really impressive time-lapse film showing the construction of the stands and stage in the abbey ruins for the 2012 production