Linking up: engaging, heritage, and histories

Ten years ago, when I started this site (as ‘York Walks‘) there wasn’t much online representing a resident’s view of York. Only two websites, as I recall. One was the City of York council’s collection of historic photographs of York from the city archives, still online. The other a personal website with several pages on York, which I’m pleased to see is also still online.

When I went off wandering around the local patch with my camera I guess I could have said I was attempting to ‘engage with our heritage’. But those words wouldn’t have come to mind back in 2004.

One of the most striking things, recently, is how this website you’re reading seems now to be part of a wider conversation about ‘our heritage’, and our ‘engagement’ with our heritage.

What is ‘heritage’ anyway? A couple of definitions from the English Heritage website (bold emphasis added):

2) “Heritage is a broad concept and includes the natural as well as the cultural environment. It encompasses landscapes, historic places, sites and built environments, as well as bio-diversity, collections, past and continuing cultural practices, knowledge and living experiences. It records and expresses the long processes of historic development, forming the essence of diverse national, regional, indigenous and local identities and is an integral part of modern life. It is a dynamic reference point and positive instrument for growth and change. The particular heritage and collective memory of each locality or community is irreplaceable and an important foundation for development, both now and into the future.”
International Cultural Tourism Charter, ICOMOS, 1999

In this famously ‘historic’ city certain aspects have been emphasised and promoted, other histories deserve to be. York’s Alternative History established in 2012 in response to the ‘York 800′ festival approached York’s heritage and histories from alternative viewpoints, and aims ‘put the politics back in’. Their recent report on the public meeting to discuss the future of Stonebow House may be of interest to anyone who, like me, was unable to attend. 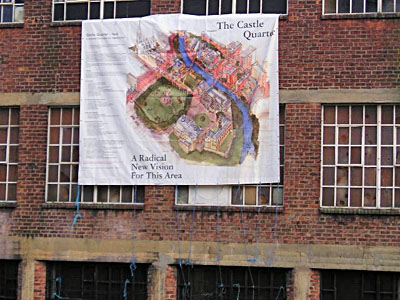 By the Foss, Jan 2004. Banner promoting plans for the ‘Castle Quarter’

The York: Living with History project (behind the ‘Write your own plaque‘ event) has encouraged discussion of future uses of the Stonebow, and has worked with York Civic Trust on a similar approach to plans for the Castle (Clifford’s Tower/Eye of York) area. Many of the thoughts and perspectives put forward in its recent report on ‘A Walk on the Wild Side’ reflect thoughts expressed on these pages and in responses to my recent survey.

The University of York is supporting several projects. Within the Walls is a collaborative doctoral research project:

‘The 3-5 year project will critically assess the various heritage values that apply to York’s historic environment and its archive, placing national and international values … alongside locally held ‘social’ values. According to John Schofield, the project’s director, “this is a wonderful and timely opportunity to critically and closely assess what heritage means to local people, including those rarely before engaged in the subject. To take one particular question: do local people care about World Heritage? Does it matter, or is local heritage of more concern?”‘

The project’s blog came to my attention as it links to this site. In Within, or perhaps, Without the Walls? Katrina Foxton writes:

‘access to heritage and culture is one of the main issues we are studying. The heritage sector is pushing to be more democratic, to account for the values of many at both a local and a global level. But can heritage management—such as that surrounding archival, built or buried remains—be open to all? Or indeed, should it should remain in the hands of qualified experts (with a ‘wall’ built around it)? This project is entering an already expressive debate (see York Stories website ….)’ 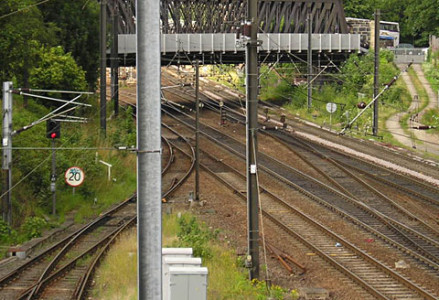 ‘We are now approaching York’. So many ways in. By Holgate Bridge, July 2004

The Heritage York Project is also part of the debate.

It focuses on ‘what people ascribe value to in their surroundings’, and ‘explores alternative or non-authorised definitions of heritage’.

Several of the project’s blog pages link to this site and use my images (credited and linked, which is okay).

The project’s blog includes thoughts and perspectives on the Bonding Warehouse: ‘What else could you be?’, on Stonebow: Breaking the Fundamental Rules, and Through the Doors of Perspective (perspectives and ‘competing interests’ in approaches to heritage).

In our ‘York’ approach to heritage, everything counts; everywhere has value…

Indeed. That’s what I’ve been hoping to convey on these pages. And I guess it’s how many of us feel about the places we care about. It’s good that alternative perspectives on ‘heritage value’ are being discussed so widely now. 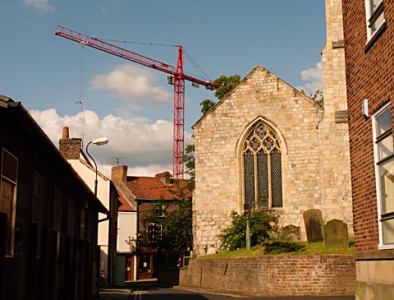 Buildings old and new, and more under construction. Crane over Walmgate, June 2014

It’s hard to keep up with the enormous changes in this city in the last decade or so, and to properly ‘engage’ in the right ways to have some influence on how decisions are made. But there’s clearly a great deal of interest in ways of enabling more people to do that, and in understanding what heritage and which histories we value, and why. More of our real and recent history is being collected together and made available online. All good stuff. I hope we can continue to link it all together to produce more inclusive results for this city’s heritage in the future.

A reminder of those sites mentioned above and a few others you may find of interest:

Within the Walls project

By Lisa @YorkStories • 6 June 2014 Histories, Opinions, thoughts To link to this page's proper location please use the > permalink.