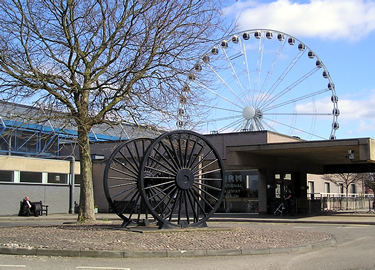 A major change to the York skyline – this enormous observation wheel, recently constructed next to the National Railway Museum. It’s quite impressive, certainly against a blue sky. These photos were taken on Easter Sunday 2006. 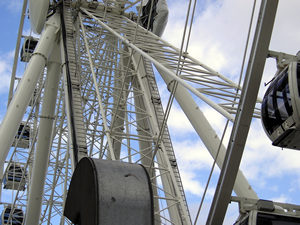 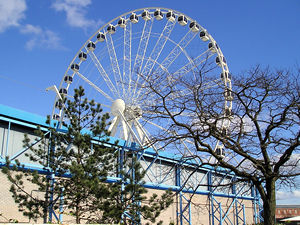 It’s visible from some distance away, but if you’re approaching from out of town, up Leeman Road, it disappears for a time behind buildings, then is suddenly visible again, and then as you round the corner of the museum buildings, it’s right there almost on top of you. It’s very close to the buildings. 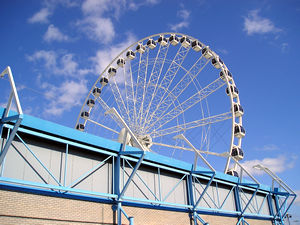 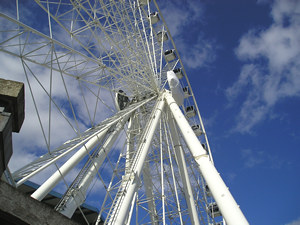 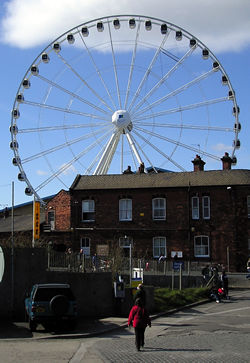 In the shadow of this huge playful happy-go-lucky, going-roundy thing is a Very Important Building – the current home of the Arc Light project, a hostel for the homeless. It’s a humble looking place. The crowds flocked past it on their way to the wheel, as I took these photographs on Easter Sunday.

The Arc Light needs to relocate, but is having great difficulty finding a new home – despite having the funding available – as no York community wants it.

I’ve got nothing against the frivolous big wheel. It’s fun, and I hope everyone enjoys it. It’s fun, but it’s – well, useless – compared to the building below it, which is serving a very important function. We can find space for the Norwich Union sponsored wheel, but we can’t find a place to build a centre for the homeless. Seems odd, really, doesn’t it.

Update – the Arc Light has since relocated to a new centre at the Union Terrace car park.

For more photos, see Darren’s page on The York Eye.