This page discusses a controversial plan put forward in December 2010 to site an observation wheel behind York Art Gallery, to the north of the Museum Gardens. This was later withdrawn. A more recent application to site the wheel in York, in the gardens of the Royal York hotel near the station, was successful and the wheel was installed in December 2011. It has now (2013) been dismantled.

The text and photos (and ‘photomontages’) below have been left here in case they’re of interest. 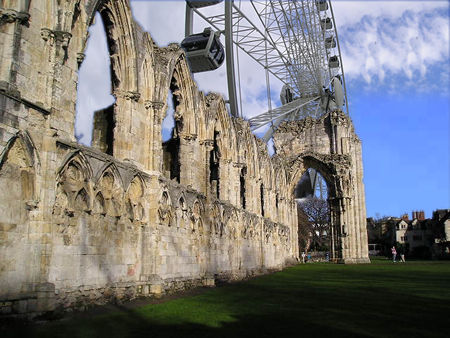 ‘At a time when cities are competing intensely to improve their offer to visitors and are seeking ways to mitigate the effects of the global recession, hosting a giant temporary observation wheel is the perfect way to give York a visible edge’ – said a spokesman for the wheel-providing company, Great City Attractions (GCA), in an article on the art gallery’s website.

Our visible edge is generally recognised by most, I think – and I’d venture to suggest that if CGA don’t already appreciate our ‘visible edge’ then we shouldn’t be letting them put a bit of their machinery in the middle of our city. But that aside, I hope you’ve all considered the important role of giant observation wheels in mitigating the effects of global recession.

Many hoteliers agree that this boring old ruin will look much better with an observation wheel in the background.

The official plans call it an observation wheel – making it sound highbrow, intellectual. People who have written letters of objection to the proposals tend to call it a Ferris wheel, or a fairground ride – making it sound a bit crass and tacky. The BBC website stories call it a tourist wheel. A letter of objection from Mr White of York calls it ‘an enormous construct placed confusedly out of context with its historical surroundings’, a nice turn of phrase, and my preferred description.

The apparent desperation to get a big wheel back into the city, as near to the historic centre as possible, suggests that those who think it’s an asset must have quite a low opinion of what’s here already. When potential tourists are looking for somewhere to visit, weighing up the merits of different cities, it seems unlikely that they’re saying ‘Let’s go to York, they’ve got a wheel! I never fancied going before, didn’t think there was much there. But that ferris wheel/observation wheel/enormous construct placed confusedly out of context with its historical surroundings has really swung it for me’.

Having a big wheel in York seems to be compulsory, though many are asking why, if the concept is so successful, the earlier wheel was removed from the National Railway Museum. Apparently the NRM site didn’t allow the wheel to run after 6pm, and the operators want to run it until later in the evening, so they can make more dosh, and exploit the potential of this particularly historic city centre site (though the planning application didn’t word it that way).

It’s apparently necessary for us to have a big wheel plonked next to the abbey to enhance our tourist offer and provide the views required for an exciting visitor experience. Because as we all know, York is a crap place, no one wants to visit it. We’re desperate for tourists, we’ll do anything to get them. 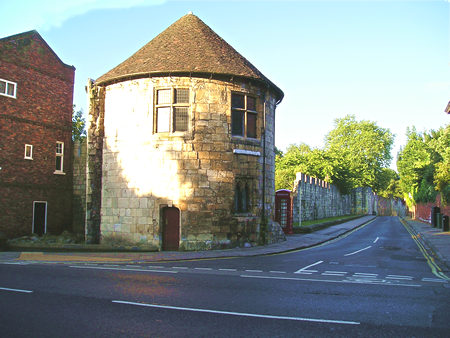 Marygate, from Bootham, with St Mary’s Tower at the corner of the old abbey wall. The wheel would be sited behind this tower.

The application submitted in December 2010 appeared to consider that the impact of the wheel on the views of the Minster was of most significance, and therefore the application tried to prove there would be little impact (we could look through the wheel’s spokes, or something). But for many of us, the impact of the wheel on the smaller buildings it would be in the middle of is just as significant.

Bizarrely, the supporting information stated that from Bootham, ‘The heritage significance is not affected by the development which is barely visible from this viewpoint.’ I guess Bootham is a long street, and they must have been standing at the far end. 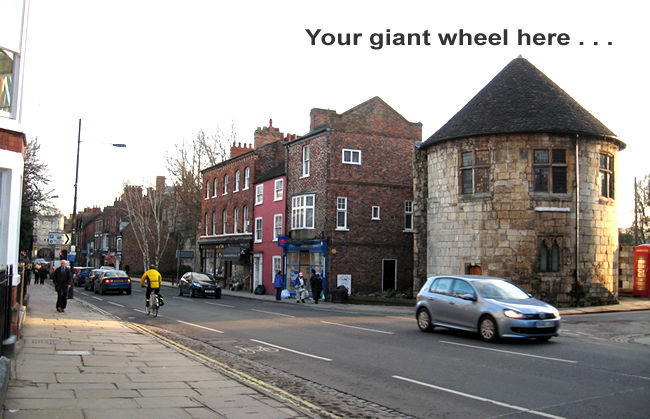 As the applicants didn’t bother to represent the the impact on the view above, I can only offer my low-budget version of the view from Bootham.

Some people like the idea of the juxtaposition of this vast 21st century hi-tech structure next to small-scale medieval buildings – if they live on the other side of the city, don’t know the area very well, hardly ever pass the place.

Instead of going round in circles on a gentrified fairground ride it might be better if we all paid more attention, from ground level, to buildings like St Mary’s Tower.