We’re off to Hornsea Pottery 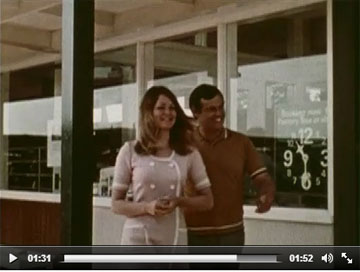 Or rather, to Hornsea Pottery, which was perhaps the only reason anyone went to Hornsea, unless they lived there.

The pottery was really famous in its day. We went there, but I can’t remember anything about it, and don’t remember it being as exciting as this. Perhaps we found the attraction part too crowded and ended up looking at crockery for hours. Anyway, the film is a delight, only short, a couple of ads, viewable via this page on the Yorkshire Film Archive website

The housewife of the 1950s has escaped from the kitchen, only to buy more things for it, as she’s browsing the shelves in the pottery shop. Accompanied by a lovely jolly song — which I now can’t get out of my head — so be warned, the same may happen to you. ‘We’re off to Hornsea Pottery, a wonderful place to go, Hip hip hooray, there’s nothing to pay, for lots and lots of treats you know.’

The 1960s couple look much happier than the 1950s couple in the Wallace Arnold film. This is of course because it’s the 1960s, which were groovy and swinging, with couples sharing long sandwiches in a slightly saucy way in public.

Then on to the 1970s (pictured above). The innocent singing replaced by a confident manly voiceover: ‘This is the place to visit’, and the slick Capri pulling up in the car park. We’re in colour now and in a Capri, but we haven’t yet escaped the traditional roles: ‘Pottery shops for mum to browse round, and a well-stocked garden centre for dad.’

Time to head back to York now, but I hope everyone enjoyed the excursion.

Image used with permission from the Yorkshire Film Archive.

More info, elsewhere on the web

Information on these ads and the history of Hornsea Pottery (sadly no longer in business) on the YFA page for the film linked to above (under Context) and in this PDF.
Hornsea Museum’s pages on Hornsea Pottery

It is now the site of Hornsea Freeport shopping village

Lisa @YorkStories is the creator, administrator, and writer of content on www.yorkstories.co.uk. She can be contacted on this link or via Twitter, @YorkStories
View all posts by Lisa @YorkStories →
Tagged  YFA
To link to this page's proper location please use the > permalink