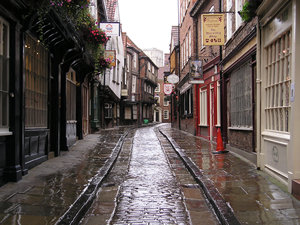 I went for a walk on the evening of 24 June, in the rain. Generally I don’t attempt to take photos in these kinds of conditions, in the darker parts of the year, because my camera struggles in low light. And like most people, I don’t tend to go wandering around in the rain, unless I’ve got a particular goal in mind. But as it’s raining so much this June, there seemed no point waiting any longer for a sunny day.

So here’s a photo of our famous Shambles. On a wet Sunday evening, deserted, apart from a green bin bag and an orange traffic cone, and me, under my umbrella.

This is, of course, a very famous street, apparently "Europe’s best preserved Medieval street". Also "Europe’s most visited street" – hence my surprise at ever finding it empty. 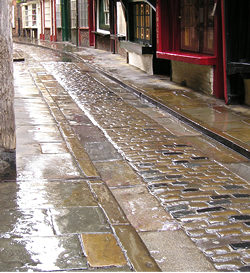 The thing that struck me as particularly handsome in this street – and I can’t say I’ve ever noticed it before – was the paving. Normally you can’t see the paving, as the street is crammed with people. Here, rain-drenched, it’s shining and reflective and all the colours in the stone come out.

We don’t often study the floor beneath our feet – but such details are so important in a streetscape. We only have to imagine this street with tarmac instead to realise what a difference it makes.

I imagine most locals avoid Shambles (or The Shambles, as it tends to get called), unless they need something from it. They’re not likely to need anything everyday and important here, as those aren’t the kind of things sold here.

This is a tourist-orientated street, full of touristy shops, where people who are visiting the city wander slowly, taking photos, and looking up at the medieval frontages, and the famous bit where the houses crowd in particularly closely at first-floor level. 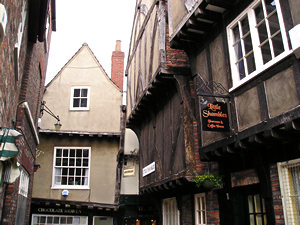 The tourist guides urge you to "Live the History" of York, by visiting streets like this one. There are so many photos of Shambles, and "Little Shambles", which joins it, pictured here. The Shambles is picturesque and obviously historic, but I’ve never felt inspired by it, never felt much connection to it. I wonder if it’s because it’s such a tourist magnet, so it doesn’t really feel like it belongs to the people of York. It belongs to the visitors to this city, it’s their domain.

That doesn’t mean I’m not aware of its history. Nowadays it’s all modern shop signs, hanging baskets, and all kinds of un-medieval clutter that spoils a good photo – the burglar alarms being particularly prominent. But this was, as every tourist guide tells us, the street of the butchers. It would no doubt have been a really unpleasant place in its medieval heyday, with the animals that provided the meat being slaughtered round the back of these shops. The blood and guts were thrown into the channel in the middle of the street. In the old days, it would have been offal down here . . . 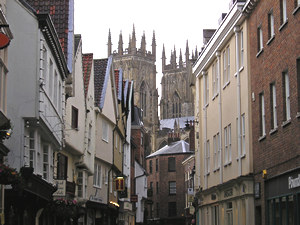 The Minster is visible from Shambles, but is far more handsomely set off from this street, High Petergate. This street, though still a touristy kind of street, feels completely different, and is far more aesthetically pleasing, particularly from here, in the evening, with the Minster framed by neatly whitewashed buildings, all uneven and all crowding in at slightly different angles. 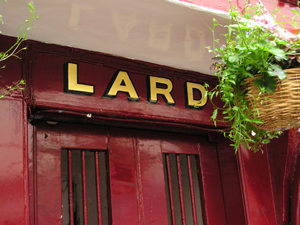 I don’t think there are any butchers’ shops left on Shambles, our old street of the butchers, but here on Petergate is Scotts the Butchers, with one of my favourite bits of shop frontage. I’m part of that generation that uses vegetable oil to cook with, but Scotts proudly advertises Lard across its front, right above one of its doors. I love the Lard Door and hope it remains. You have to imagine the word Lard said in the local accent, with a rather elongated a. 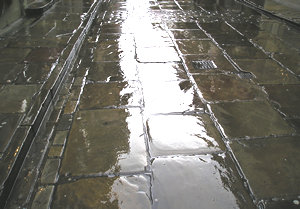 And here’s Stonegate. Not the usual view, but I’m not trying to attract tourists. I just noticed (again) how the light bounces off proper stone when it’s been raining. This may be the type of stone they call "York stone", but whatever kind it is, it’s the only bright thing on these dark evening streets on this rainy night.