I was passing the ‘Splash Palace’ demolition site yesterday, and couldn’t help noticing that the toilet block has almost completely gone, and that there’s a useful council-provided ‘What’s going on’ type announcement, attached to the fencing, which many people were reading. I stood beside a gentleman who was studying the information carefully.

I felt a bit silly to be so interested in a disappeared toilet block. Maybe he did too. As he walked off we exchanged thoughts on the toilet issue, bafflement mainly at why toilets were being demolished, when we already don’t have enough, and the ones we do have are so manky. I mentioned that we do have those ones in Silver Street, but that I wouldn’t bother as they cost ‘about 40p’, and we agreed that it was best to use the ones in Marks and Spencers, for free.

M&S presumably are fully aware of this, and that’s why they’ve located them in a far-flung corner of the top floor, and made them as small and pokey as possible, to deter us.

After he’d gone I noticed another sign attached to the fencing, an A4-sized home-made one, declaring this demolition a ’scandal’. Many people have expressed similar views in the comments sections of The Press website, but to actually make a sign and attach it to the railings requires far more effort. The fact that someone had I found quite cheering and amusing. 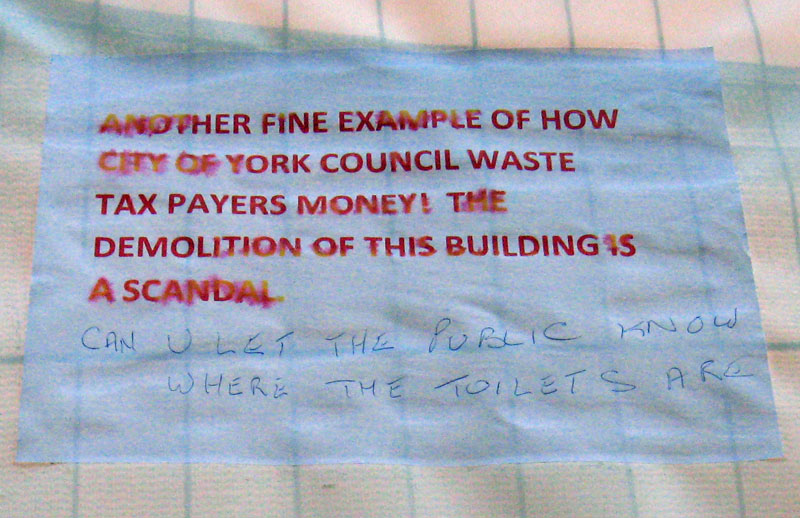 Underneath, added in biro – a plaintive and perhaps desperate message:
‘CAN U LET THE PUBLIC KNOW WHERE THE TOILETS ARE’

Lisa @YorkStories is the creator, administrator, and writer of content on www.yorkstories.co.uk. She can be contacted on this link or via Twitter, @YorkStories
View all posts by Lisa @YorkStories →
Tagged  demolition, Parliament St, Splash Palace, toilets
To link to this page's proper location please use the > permalink