‘Ghost sign’ on the corner of Ordnance Lane and Fulford Rd

We’ve just been looking at buildings in Ordnance Lane, and before we leave there I should mention this ‘ghost sign’ — an old faded painted sign on the brickwork on the corner where Ordnance Lane meets Fulford Road. I thought we’d covered most of the ghost signs in previous pages, but I missed this one. It’s a rather handsome green, and still visible is the name ‘A H Davies’ and ‘Wills’s’. Wills’s made cigarettes. Perhaps behind the more modern billboard added since more of the old advert is preserved, brighter green. It was a huge painted ad, and a closer look suggests it was repainted more than once, as there’s a shadow of a former ‘W’ rather obvious.

It’s now just one of four signs on this prominent end wall, at the end of Ordnance Lane. 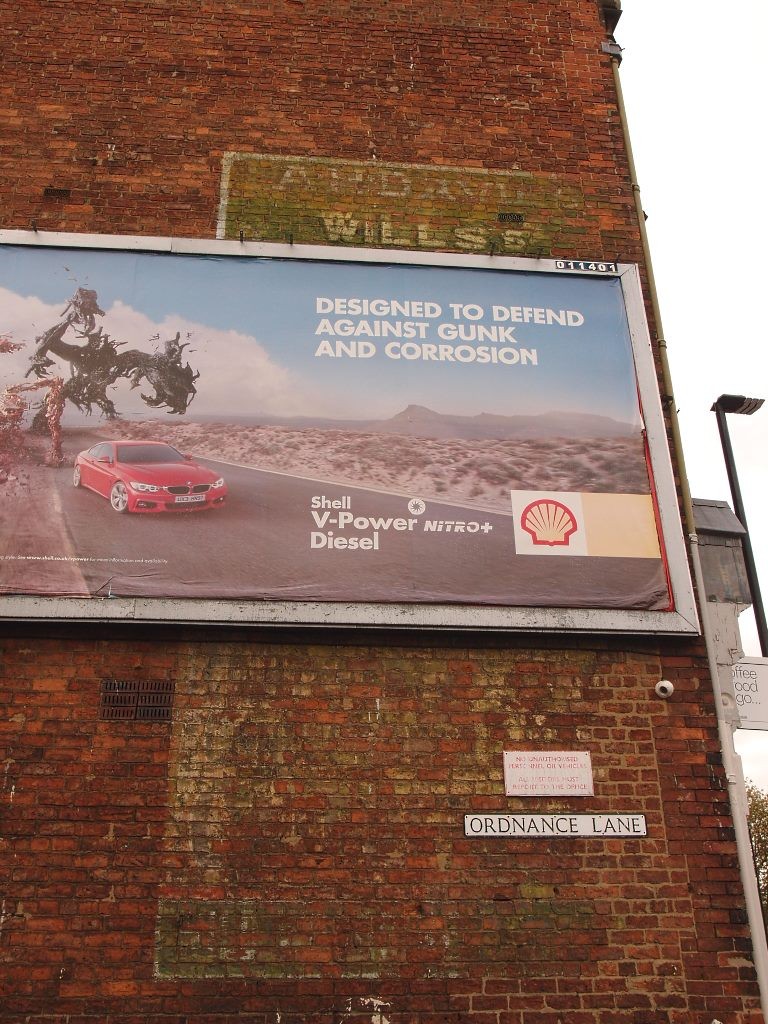 ‘Ghost sign’, with other signs, on the corner of Ordnance Lane and Fulford Rd

The old signs fade, or erode, and don’t seem prominent enough, so new ones are added, sometimes repeating, rather than replacing, what was there before: 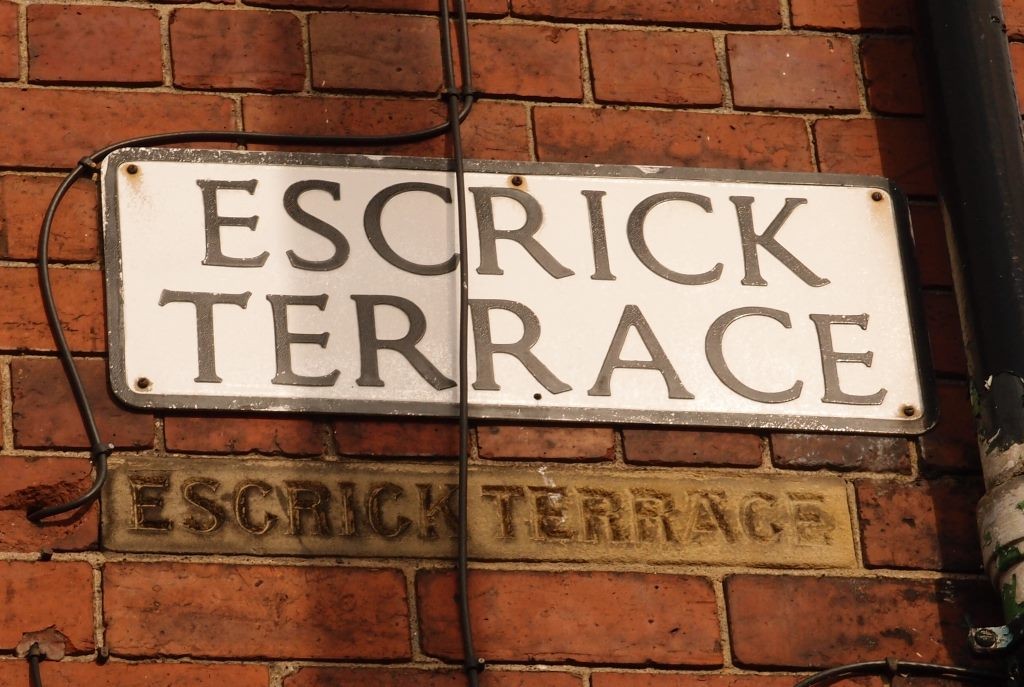 Escrick Terrace: so good they named it twice.

Also in the same area of York, moving closer to the city centre, I noticed this handsome old hand-painted sign in the doorway of a post-war block of flats on Fishergate: 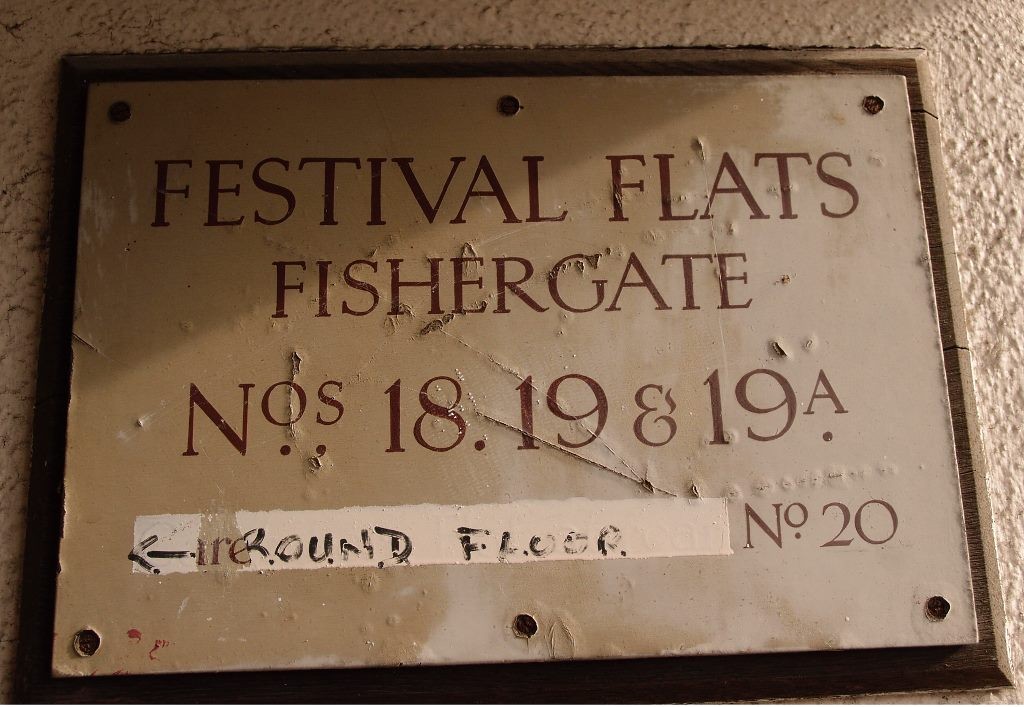 Some of its carefully created lettering has since been obscured by a patch of paint and a note added in marker pen, but perhaps this casual addition makes us appreciate the earlier elegant lettering even more.

Those examples were all from the Fishergate/Fulford Road area. On the same side of town, but off Lawrence Street, heading out towards Hull Road, a relatively modern sign. But it’s old enough to make me feel a bit nostalgic: 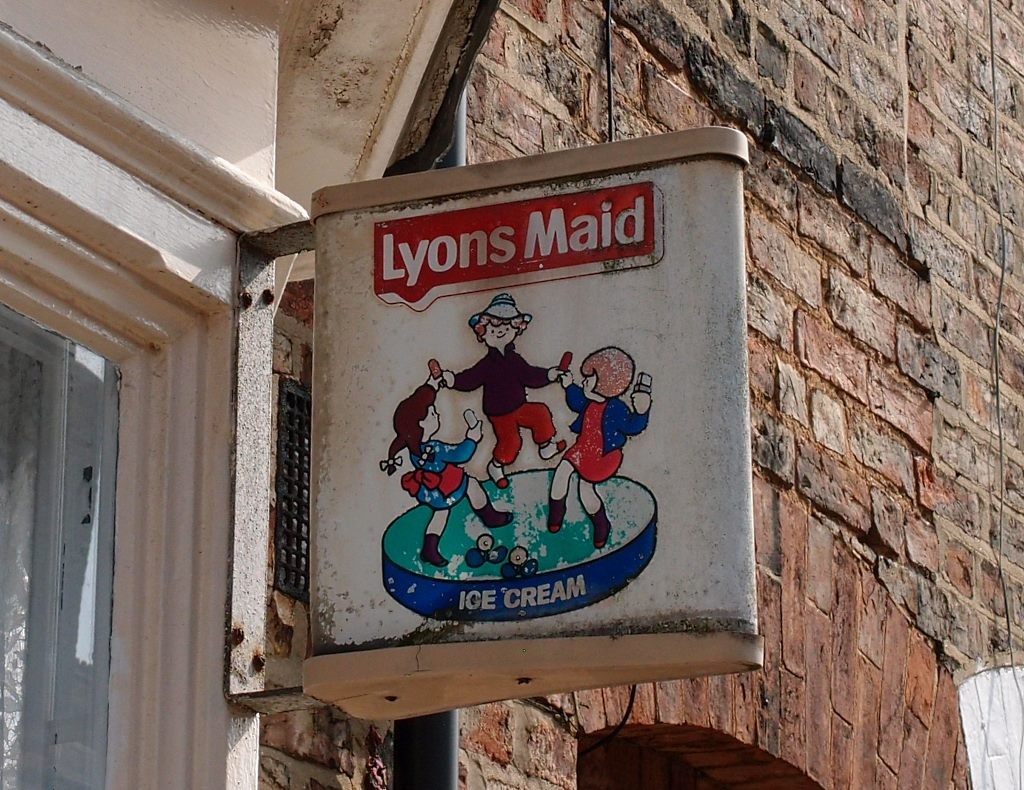 On Milton Street, one of the streets of terraced houses, this plastic sign still sticking out from the wall of what looks like an ordinary house the same as all the others, with a bay window rather than a shop window, but it clearly was a shop at one time and it sold Lyons Maid ice cream.

That image/logo was so successful, a brilliant piece of work. It still evokes carefree childhood times and happy summer days, so many decades after it was designed to represent this brand. According to Wikipedia it is ‘sometimes known as the “Good Time Sign” but more generally referred to in house as the “Dancing Children”.’

The sign is double-sided, and still bright on one side. On its sunny side, the other side, its colours are pale and bleached out by all those years of sunny summer days when we rushed down to the local shop or the ice cream van for ice lollies. 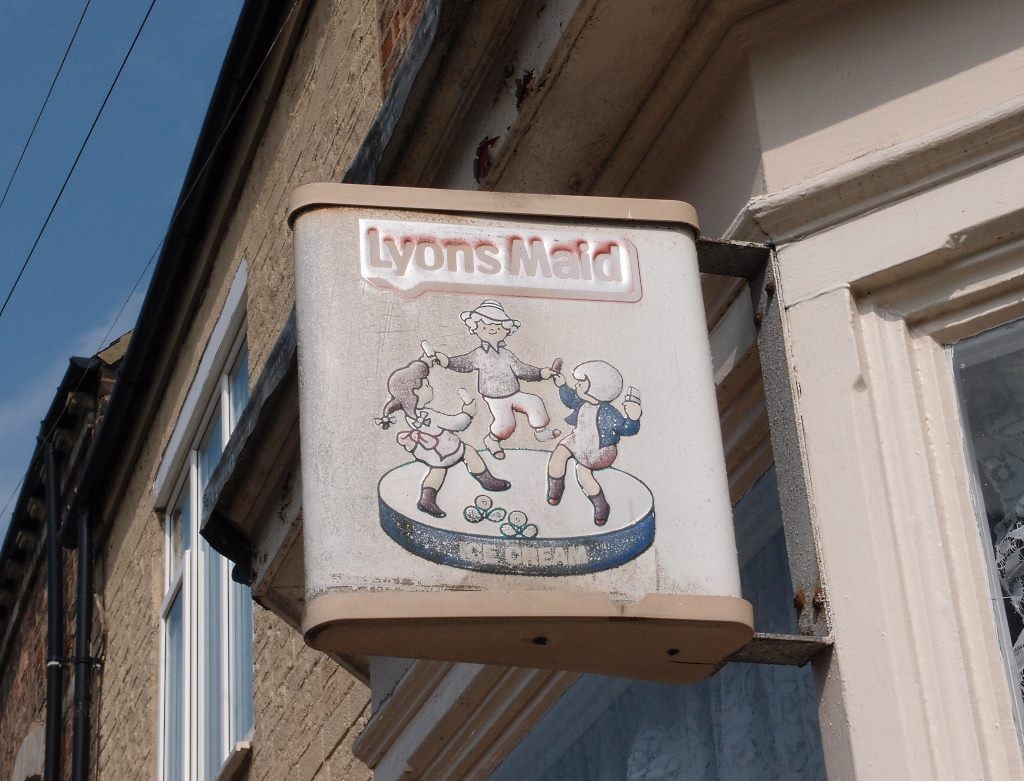 Whether or not it’s hot enough for ice lollies, I hope everyone’s enjoying the Bank Holiday weekend.

‘Signage Sunday’ may become a regular addition to the site, or not. Comments welcome, as always, below.

By Lisa @YorkStories • 29 May 2016 Details, Signs and symbols
Tagged  ghost signs, signage
To link to this page's proper location please use the > permalink