Update: April 2014 … since this page was compiled I’ve added many more pages on what I later came to know as ‘ghost signs’. See all pages tagged ghost signs for much more on the Bile Beans ad, and others. 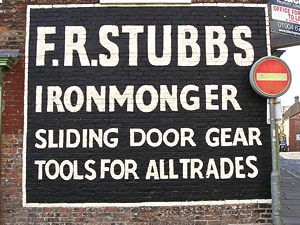 This painted advert, on the wall of Foss Bridge House, has been here for years. The paint had peeled and faded, but it’s now strikingly new and fresh, shouting out to passers-by the usefulness of Stubbs the Ironmonger.

If your attention is attracted by this, and you realise you’re in need of tools, or perhaps sliding door gear, you’re going to be disappointed, as on turning the corner you’ll find that there’s now a restaurant there instead.

The conversion of the building has maintained the exterior – so accurately that the painted wall ads have been restored as well. 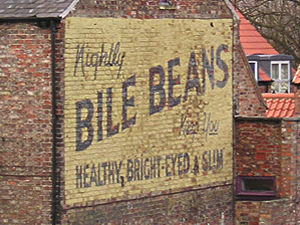 The most well-known old ad painted on a brick wall is this one – and I thank Chris, who used to live in York, who reminded me about it. I’ve got a print of a painting by Baz Ward featuring this local landmark. This ad too has been repainted and preserved, though not as recently. It tells us that “Nightly BILE BEANS Keep You HEALTHY BRIGHT EYED & SLIM”. I think it’s the name of the product that makes it such a memorable advert.

It is obviously from a different time, when you could make such claims about health-related products. If it was painted now it would have to say something like “Bile Beans, as part of a healthy lifestyle, may reduce your cholesterol and decrease your risk of heart disease. It may also help with weight loss as part of a calorie controlled diet” – which doesn’t grab the attention quite so effectively, and would need a much bigger wall.

Bile beans was a very popular proprietary medicine during the twentieth century in the UK. The product consisted of a variety of purgatives, cholagogues and carminatives formulated into a pill and advertised for ‘inner health’. The product was devised in Australia in 1899, survived a damning judgement in a law court in Scotland in 1905, became a brand leader in the 1930s and was on sale until the mid-1980s. 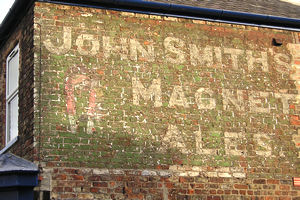 Off Heslington Road, one that hasn’t been repainted and restored, and will never be, I imagine. It advertises “JOHN SMITH’S MAGNET ALES”. I don’t know when this ad dates from, but it conjures up images of the old days when no one had thought of measuring alcohol in “units”, only in pints, and when adults weren’t being constantly nagged at about their bad habits by patronising government ministers. 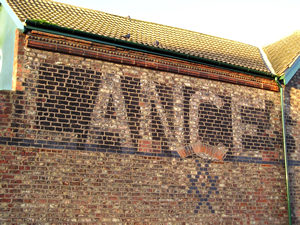 This one, on Navigation Road, says “Lances”. Again it’s a faded one, not repainted. I don’t know anything about Lances, what they did, what they might still be doing. Like the Magnet ad above, it’s perhaps all the better for not being repainted, fading away, naturally weathered.

When I compiled this page I wasn’t familiar with the term ‘ghost signs’, but these ads are commonly known as such. There’s a whole website about them: www.ghostsigns.co.uk, with some wonderful examples and interesting background information.

www.thepotteries.org – wall advertisements may also be of interest.