The recent history of the Bonding Warehouse, in pictures: 1 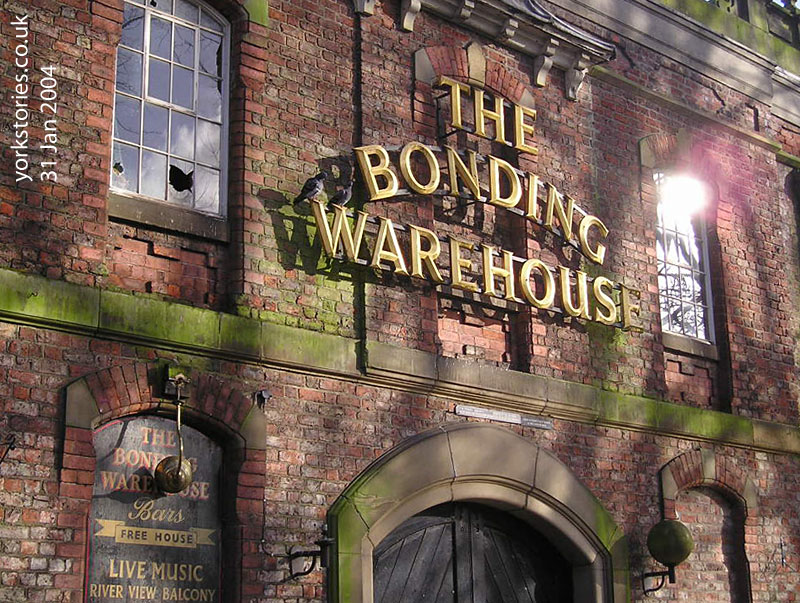 The abandoned Bonding, in winter sunlight, 2004

So work is now underway at the Bonding Warehouse. It has been empty since the floods of 2000. Well, most of the time. It has been briefly occupied several times in the last fourteen years – by builders, for a time, by protest groups on two occasions. By pigeons all the way through all of that.

For the last ten years I’ve been taking photos of it, every now and then, and captured some of this recent history. This page covers the years 2004-2007, to the point just before it was sold.

These first photos date from one of my earliest ‘York Walks’ (as I called the first pages of the York Stories website) in 2004. Yes, a whole ten years ago. 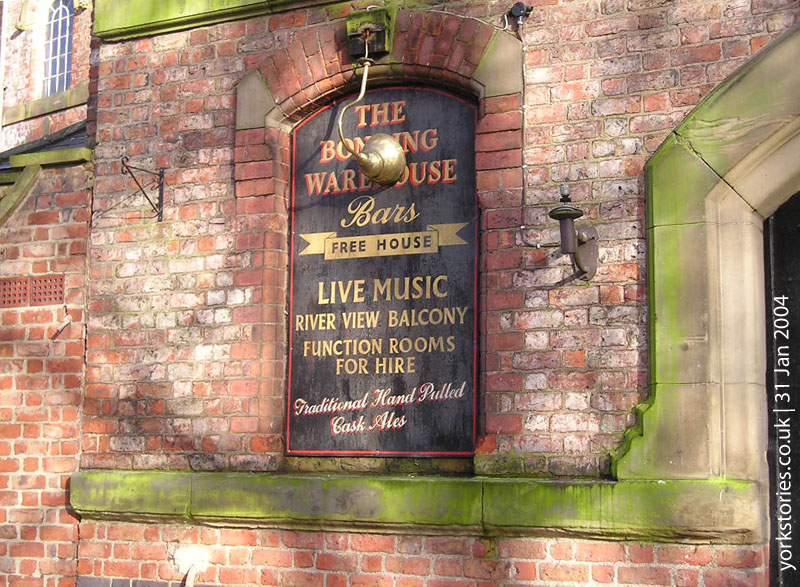 Once famous for live music

Though it hadn’t hosted any live music or functions for four years or more, the sign by the door remained. 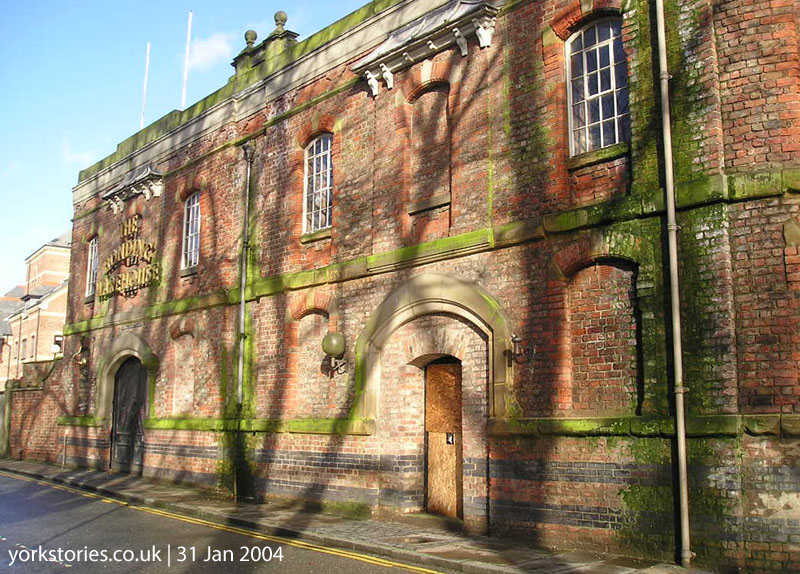 How green is my brickwork

Bright winter sunlight lit the bright green mossy growth covering much of its exterior. An aesthetically pleasing combination against the Victorian red brick, but probably not a good sign. It looked generally mossy and damp, as if it had never quite dried out. As if four year old Ouse floodwater would come flowing out if you opened the door. 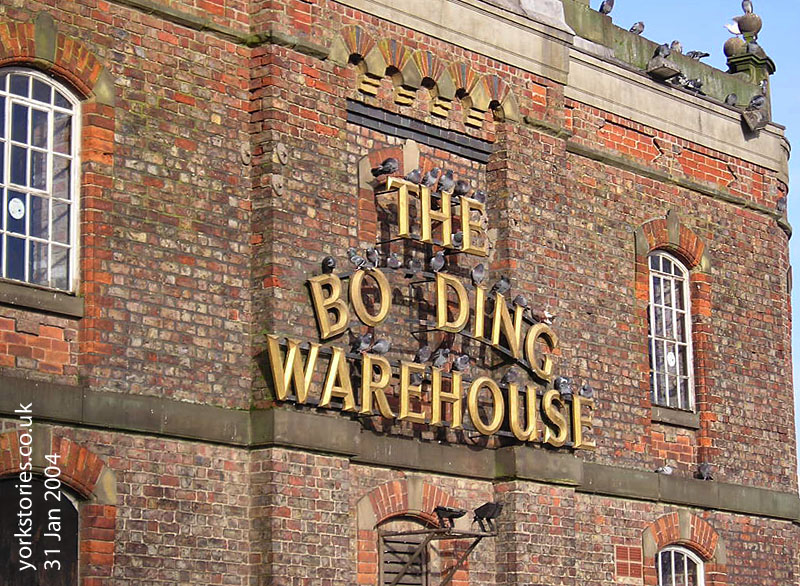 And the famous sign, with its missing letter, so the Press ended up calling it the ‘Bo Ding Warehouse’. Pigeons perching there, soaking up the sun.

No one seemed to care much about the Bonding Warehouse, at this point. It was just sitting there quietly rotting, or so it seemed. Until … 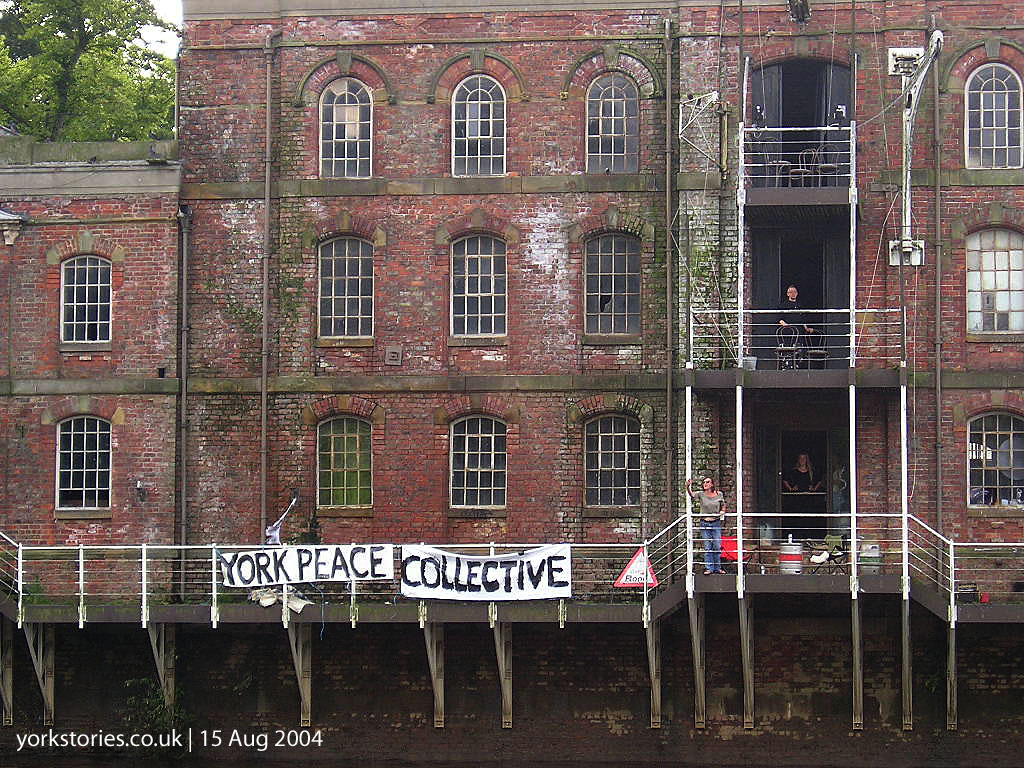 In the summer of 2004 it was opened up and occupied by the York Peace Collective. I went along to have a look but didn’t venture inside, as the atmosphere at that point wasn’t quite as peaceful as the banner suggested. 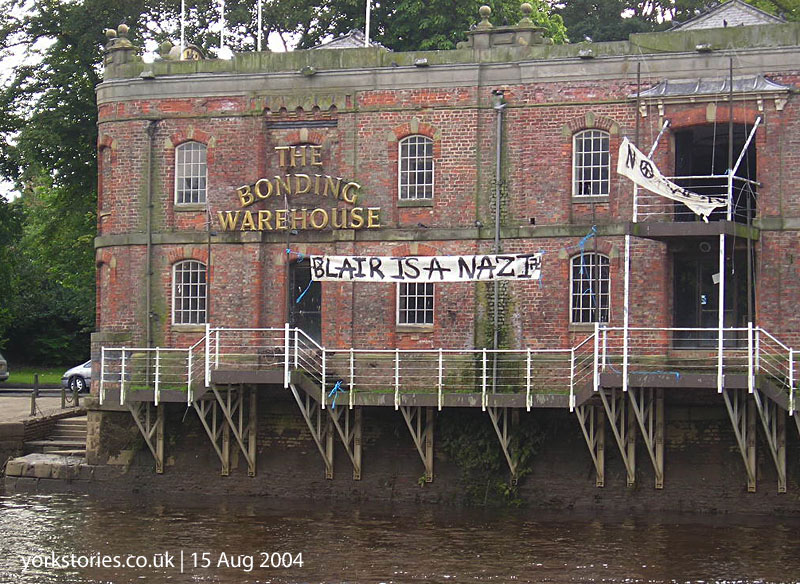 Another banner on the riverside during the 2004 occupation. Remember Tony Blair? 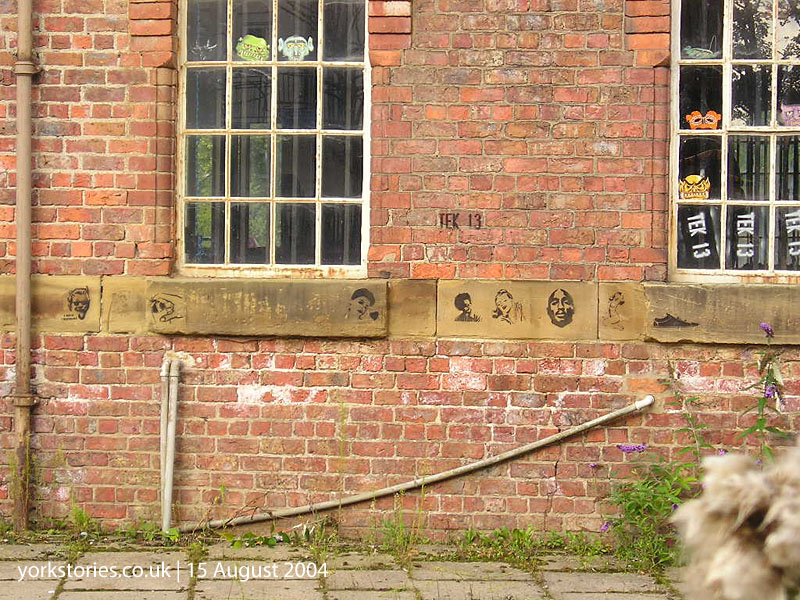 Around the other side, graffiti stencilled onto the stonework. 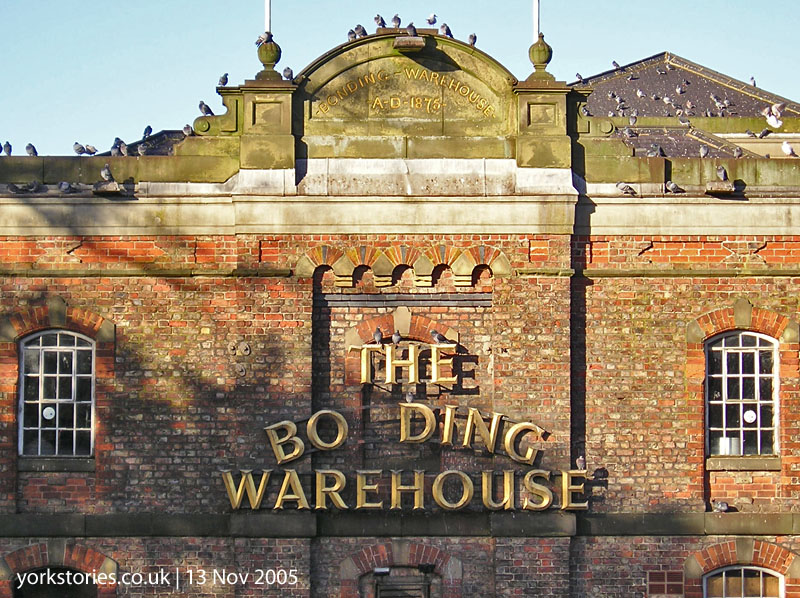 While we humans couldn’t quite decide what to do with it, the pigeons claimed it. By late 2005 its roof was full of pigeons, and among the huge flock the occasional gull perched at the corners. 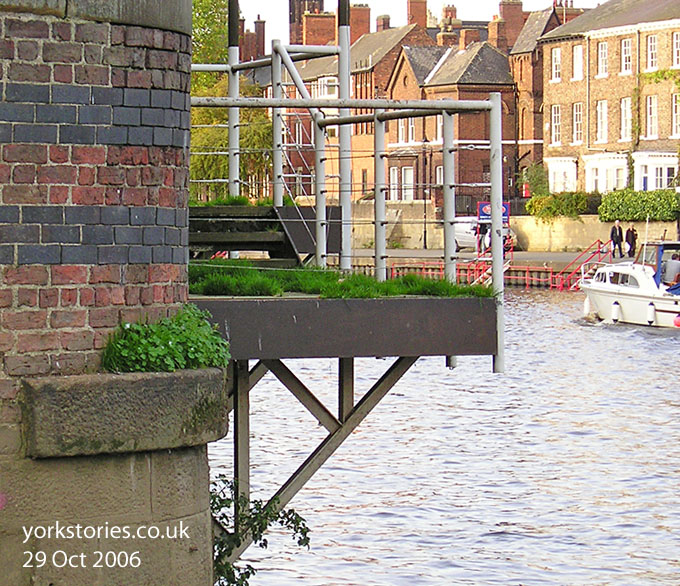 How green is my balcony

Nature takes over what we neglect. The building became very wildlife-friendly, growing its own little eco-systems. By 2006 a lawn appeared to have established itself on the riverside balconies.

On 13 September 2006 the Press reported that the building was to be sold.

That winter, squatters again occupied the building for a brief period (see links, below).

All this time – and in the years before the closure – the building was ‘ours’. The sense of ownership demonstrated not only by the occupations, but in letters to the paper. A letter from Alison Sinclair suggested that the building should, if sold, provide some form of leisure venue, as in the past:

Even if it is eventually sold off, if this function could continue, it would keep a building which belongs to the city, and is bound up with its heritage, accessible to the public.
(full text here)

Wasn’t to be. Sadly our Bonding Warehouse is lost to us.

I kept calling by and taking photos every now and then, as building work started and then stopped again, as the gates displayed thought-provoking graffiti. So let’s continue to page 2 of this recent history – 2007 to the present time …

Links from The Press in York, with more information on some of the events and developments (or lack of them) during these years.