In part 1 we dashed past a couple of places where Nevil Shute (the author), aka Nevil Shute Norway (one of the founders of Airspeed) lived during his time in York. As described in his autobiography Slide Rule. We briefly visited his homes in York, imagined an airship circling York Minster, and now we’re on our way to an unappreciated ‘old bus garage’ in Piccadilly. 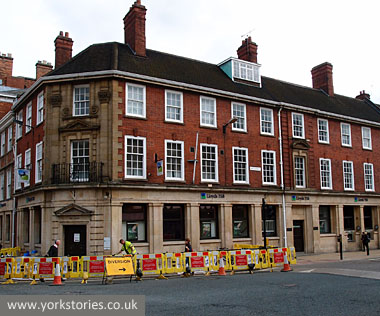 Not the best photo, but … this building at the end of Piccadilly is where Airspeed had their first office. At that time, the street of Piccadilly was quite new, and the market was still in Parliament Street, off camera to the left. Shute describes it in Slide Rule: ‘Greatly daring, we now took an office at a rent of fifteen shillings a week in a building near the market in York and here Tiltman set up a drawing board and a desk and commenced the design of the small monoplane.’

There’s a lot of information available online and in book form on the history of Airspeed, by experts in aviation. I’m not one of those, clearly. But I am interested in the stories of particular buildings here in York. Particularly one just down the road.

Continuing along Piccadilly, just past the junction with Merchantgate, we get to this building, which is the point of this journey. 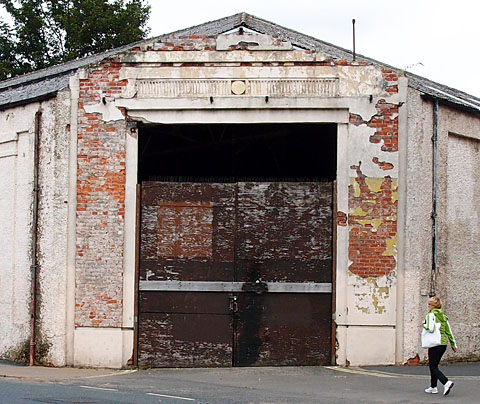 To many people in York it’s known as Reynards garage, as it was for many years. Those who don’t remember that period call it ‘an eyesore’ or ‘that old bus garage’ or ‘that old tram shed’. But this is where, in the early 1930s, the early Airspeed aircraft were built. Shute describes renting ‘half an old bus garage’ and how they struggled to raise the necessary finances, how hard they worked, how their overdraft increased.

This isn’t just a story about aviation in exciting times, in more general terms it’s an inspiring story of daring entrepreneurial vision and hard graft. And I’m sure many employers can relate to this extract from Slide Rule:

‘There was a balcony above the stores where we stored lumber, and sometimes when things were very bad financially and I could see no avenue to raise the next week’s wages, I used to go up there and look down at the fifty or sixty men working on the floor below me, and reflect that if I failed to pull the rabbit out of the hat within the next few days all those men would be without a job and on the dole.’

This is one of the aircraft Airspeed built, in the factory on Piccadilly, pictured in flight in 1932: 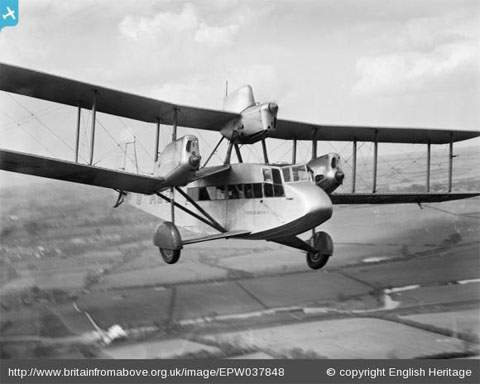 Airspeed AS.4 Ferry G-ABSI ‘Youth of Britain II’, to give it its full name.

It took less than a year to design, build and deliver the first Ferry, G-ABSI. Which makes it sound easy, but clearly it wasn’t, as Slide Rule makes clear.

But success came, after all that hard graft. By the time Airspeed left York in 1933 they had a workforce of around 100. The company’s success meant relocation to more suitable premises:

‘Clearly if we were to go on building aeroplanes we should have to move from the bus garage in York to some location on an aerodrome, and I began to visit various cities in England that had set up municipal aerodromes to ascertain what help they would give us if we were to move the company to their aerodrome. York was, unfortunately, rather backward at that time and it was some years before an aerodrome came into being for the city.’

The aerodrome referred to as coming into being later is of course the one at Clifton, since built on and now known as Clifton Moor. The airfield Airspeed used for testing during their time in York was at Sherburn-in-Elmet. There’s a fab old photo of one of the aircraft being taken out of this doorway in the middle of the night to make its voyage by road to Sherburn.

Many people, knowing this history, believe the Airspeed factory building should be preserved. So do I. Read more >

You can buy Slide Rule from amazon.co.uk, via abebooks.co.uk or borrow it from York libraries.
More information on the book

By Lisa @YorkStories • 1 October 2013 Histories
Tagged  Airspeed, Piccadilly
To link to this page's proper location please use the > permalink