This particular York Story, of daring, entrepreneurial vision and hard graft, is all connected to an old bus garage on Piccadilly. 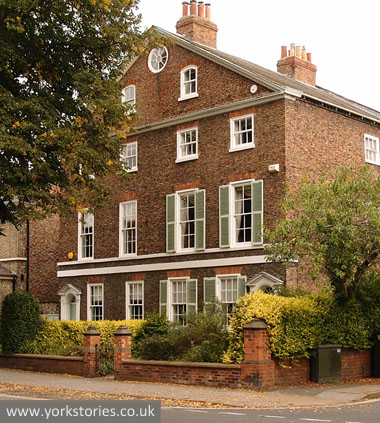 But we’re starting here, on Clifton. The street heading out of town from Bootham. These two houses are at the top of St Olaves Road, just before the footbridge for St Peter’s School.

Nevil Shute Norway — better known as the author Nevil Shute — lived here for a while, around 1932, in the house to the left in this matching pair of handsome dwellings. (I think this may be a ‘York Stories exclusive’. See Notes, below.)

We’ve got some way to go, right across town, so let’s dash up Bootham and turn right into St Leonard’s Place. 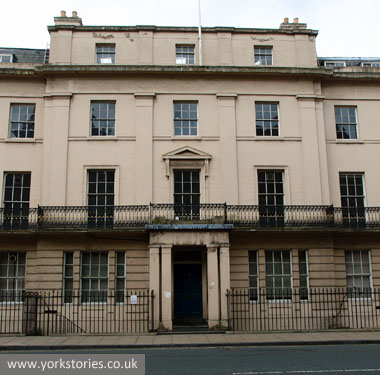 In the autumn of 1930, this building in St Leonard’s Place was the St Leonard’s Club. Shute lived here for a time. He began his novel Lonely Road here, writing it in the evenings. He spent his days working hard to find investors for his new company: Airspeed. I’ve mentioned this before, but I don’t think I properly conveyed to enough people just how fascinating and captivating this story is, and how much it’s connected with York, and with an exciting industry at an exciting time.

What I’d really like, what I really really want, is for as many people as possible to read Nevil Shute’s autobiography Slide Rule. Well, perhaps not all of it, I didn’t, but at least the introductory pages and the pages about York. And there are many pages about York. And even more about Yorkshire. I’d really like it to be read by anyone who doesn’t get yet why that ‘old bus garage’/’tram shed’ in Piccadilly is important, and inspiring.

‘Most of my adult life, perhaps all the worth-while part of it, has been spent in messing about with aeroplanes. Kenneth Grahame once wrote that ‘there is nothing — absolutely nothing — half so much worth doing as simply messing about in boats.’ With that I would agree, yet for a fleeting period in the world’s history I think that aeroplanes ran boats very close for sheer enjoyment. For about thirty years there was a period when aeroplanes would fly when you wanted them to but there were still fresh things to be learned on every flight, a period when aeroplanes were small and easily built so that experiments were cheap and new designs could fly within six months of the first glimmer in the mind of the designer. That halcyon period started about the year 1910 and it was in full flower after the first world war when I was a young man; it died with the second world war when aeroplanes had grown too costly and too complicated for individuals to build or even to operate. I count myself lucky that that fleeting period coincided with my youth and my young manhood, and that I had a part in it.’

This may strike a chord for people in many areas of interest, in other developing industries and technologies, at other times, when it was all taking off. In his case, he was literally taking off. Flying. Imagine how amazing that was. In the 1930s. Imagine it, just imagine it. Or read Slide Rule.

What we got of all this, here in York, was the initial excitement and hard graft of a company called Airspeed.

All the things Shute describes in his autobiography are a million miles from my own experience, but it convinced me of the value of ‘that old bus garage’.

We’re on our way there, from St Leonard’s Place where Shute stayed. But this page is looking a bit too long, and so we’re going to stop for refreshment, and will continue in part two.

Maybe our imaginary walk should take us from here past York Minster, which Shute flew past once in an airship. Imagine that.

The morning of 16 December 1929. After departing Howden the airship R100, with Shute on board, flew to York then headed for the Government Airship Establishment at Cardington, Bedfordshire. He writes: ‘We circled York Minster and the city’. In an airship! Imagine it!

There’s no photograph of that event as far as I’m aware, but Wikipedia has one of the airship near another impressive building in Canada.

Anyway, I digress. We need to continue our own land-based imaginary wander, to Piccadilly, and part 2 …

You can buy Slide Rule from amazon.co.uk, via abebooks.co.uk or borrow it from York libraries. More information on the book

The Nevil Shute Norway Foundation website mentions that Shute lived at number 7 Clifton for a time. I know from my own local history research that the street was renumbered at some point, so went to investigate further. The street directory of 1933 in the library includes Nevil Shute Norway in number 7. I deduced the location of number 7 from knowing that Post Office telephones occupied the White House on the corner of St Olaves Road, which was at number 5.

There are three residents listed at 7 Clifton, with different names, so it was perhaps divided into flats.

Nevil Shute Norway (to give him his proper full name rather than his author name) married Frances Heaton, who worked as a doctor at York hospital. The birth of their daughter Heather F Norway was registered in York in 1932.

If you’re going to include elsewhere information gathered here, please link to this page. Or at least credit ‘www.yorkstories.co.uk’, so people have some chance of finding the information sources for themselves. Thanks.

By Lisa @YorkStories • 1 October 2013 Histories
Tagged  Airspeed, Piccadilly
To link to this page's proper location please use the > permalink