More on the silly signage situation 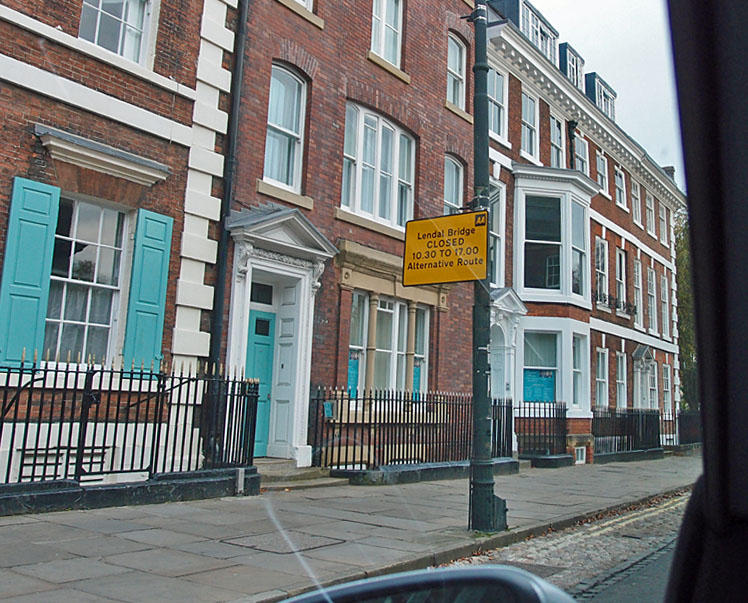 Last Sunday, heading up Bootham towards the Gillygate junction, I thought I’d have a better look at the Lendal Bridge related signage, as so many visitors have complained about it. These photos represent the point of view of the motorist, well, almost, as I was in the passenger seat.

Here’s the AA sign on Bootham as you approach the city centre. It’s like the one pictured earlier, but the right way up and on a post. Is it helpful? No. Where is Lendal Bridge exactly? I guess I need to look it up on a map, or via my phone, but I’m driving. (Well, I’m not, I’m imagining being a visitor who is driving, and this involves having to imagine not only being able to drive, which I can’t, but being unfamiliar with the place, which I’m not, but I hope other Yorkies will join in this imaginary scenario.)

The photos are enlargeable. I’m sorry that they’re not very clear, as the car windows were dirty and the light was poor. Anyway, we’re moving up Bootham now as the lights have changed. 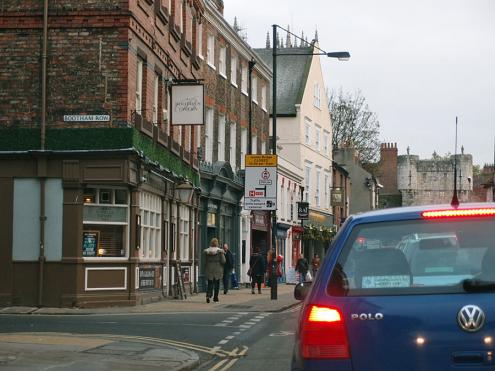 We’re now at the end of Bootham Row, right outside the Sainsbury’s Local, with Bootham Bar ahead and the Minster just visible over the rooftops on the left. One of my favourite views, which would be much nicer without the road signs intruding on the scene. But of course they’re a necessary thing. If they have to be there cluttering up the place then they should properly inform. Does this one? 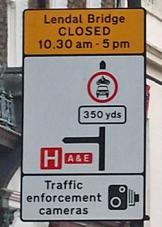 No. Again, where is this Lendal Bridge? Is it straight ahead? The yellow bit tells me about it, that it’s restricted, and the bit beneath appears to be pointing to it. There’s a right turn at the end of here too but it’s not on the sign. Cars and motorbikes not allowed to go straight on. I’ll go right then as I was planning to …

Is that how it is, if you’re a visitor?

I know, because I live here, that if you turn right and turn right again you’re on Museum Street which leads to Lendal Bridge. I also know that the sign around the corner, on the front of the Theatre Royal, is very often obscured completely by the buses standing at the stop there. Visitors are unlikely to know either of these things.

We didn’t turn right, we turned left down Gillygate, and as we did I was startled by particularly silly signage, which I captured on camera (badly, blurrily) on the return journey. 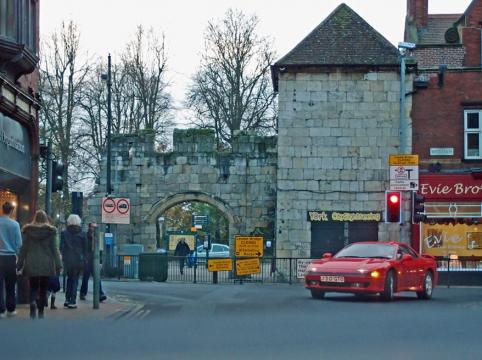 Top of Gillygate, at the lights, waiting to turn right into Bootham. This signage cluster looks particularly desperate. Looks like we now have five signs? One big one like that pictured above, and a couple to the left which I think must be connected (but I can’t read them on the blurry photo). 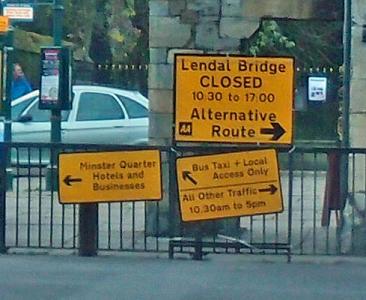 And between them this particularly desperate-looking cluster of yellow AA signs hung rather wonkily on the railings. It’s not often I feel embarrassed to be from York, but I was when I saw this ludicrous jumble. How much info are we expecting visitors to take in as they negotiate unfamiliar road junctions?

One of these signs, at last, seems to be presenting clear information. That one at the bottom in the stack of two. It does actually make sense, So why the one above it, and the others? The Minster Quarter sign is presumably necessary because the other signs are all discouraging us from going in that direction, and the businesses in the Minster Quarter want to remind us that they’re still there and accessible.

Someone please send Sir Ron Cooke and the ‘Reinvigorate York’ team to look at this street clutter ..?

How much money has been spent on these useless signs? They’re clearly useless, as so many visitors have been fined, as the Press reported recently.

And residents? How’s it been for us? Another story for another time I think. After all, this ‘trial’ is going on until February.