Though all the photos on this site so far have been taken by me with my digital camera, I didn’t take these photos – my dad took them. He worked at the railway offices just around the corner from Rougier Street, and he always had his camera with him. Now I know where I get it from – it’s obviously in the genes. I asked him if he had any photos of York from the era before I started taking pictures, and it turned out he had a lot of photos of decorated buses, from the 80s. These brought back a lot of memories of bus journeys to school, the cold war, smoking . . . do read on . . . 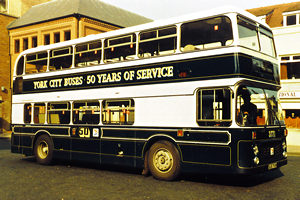 Buses
are generally taken for granted, barely noticed, except when they’re late.
Larger forms of communal public transport, like trains, planes and ships
have a romantic aura about them. Buses have no such mystique in the eyes
of most of us. Though I know that there are bus enthusiasts out there. For
them, or for anyone else who’s interested, a little snapshot of the 1980s,
via buses. 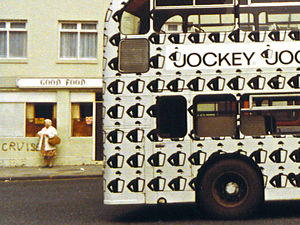 This is a photo of the back end of a bus, taken on Rougier Street in the
1980s.
The reason that it’s only the back end, is because I wanted to include
the 1980s period detail of the graffiti on the wall behind the lady visible
to the right.
The graffiti – though only part of it is visible on the photo – said ‘NO
CRUISE’. As anyone who was around at the time will remember, this wasn’t
a protest against long deluxe boat trips, but support for the CND campaign
against cruise missiles. This slogan appeared in several places on walls
in York and elsewhere.

The pub (which the sign says serves ‘Good Food’, is in Rougier Street, and is now called MacMillans (last time I looked), but around the time the photo was taken it was I think called the Richard III. Previously it had been known as the Grob and Ducat, and everyone still called it ‘The Grobs’. 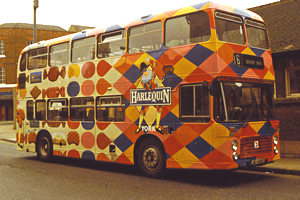 It’s
tempting to go off ‘on a trip down memory lane’ – or indeed down a bus lane.
I have fond memories of The Grobs. In the 1980s, while these decorated buses
where dropping off and picking up people in Rougier Street (this one is
pictured on the other side of the road from the photo above), the Grobs
video jukebox was admired by all as rather new and hi-tech, and we were
watching Bruce Springsteen’s ‘Dancing in the Dark’, and Madonna flouncing
about in that gondola in ‘Like a Virgin’. Ah, happy times. 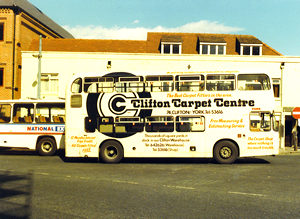 These photos are from the early part of the 80s, and there’s a minor change I noticed as the decade progresses – No Smoking stickers. This bus has them in its windows, but the Harlequin and Jockey buses above don’t. It’s only twenty years ago, but it’s odd to think of how we’re now so used to smoke-free environments, so much so that the government has recently agreed to ban it in all public places, whereas up until the early 1980s you could get on a bus and light up. If I remember, they had ashtrays on the backs of the seats. Ah, nostalgia. A different world. 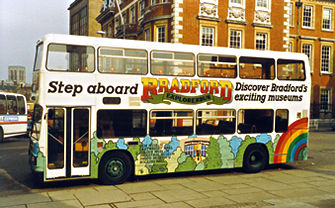 I
don’t know much about buses, but there are sites on the internet by people
who have far more knowledge. All I can say about
this bus, for example, is that it’s parked up by the war memorial, near
the railway offices, and that York Minster is just visible on the horizon
to the right of the photo. The bus says ‘Step aboard Bradford Explorer –
Discover Bradford’s exciting museums’. 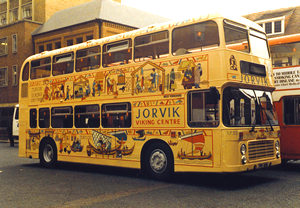 I don’t travel on buses so much now, because I live nearer the city centre, and walk instead. But in the 1980s, when my dad took these photos, I was travelling on buses all the time, going to school. I didn’t notice that they were decorated, or what they were advertising. Like all other adolescents, I was totally preoccupied with myself. This one advertises the Jorvik Viking Centre, which is now well-established, but was probably quite new at the time. 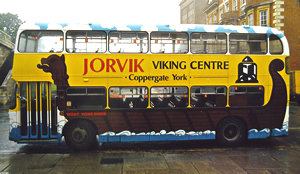 This
I think is a later one, also advertising the Jorvik Centre.
And all these photos of buses in the 80s has made me think about how much
time I spent on them in the 80s, going to school, and back again. How one
of the conductors (in the old days, when we had conductors) looked like
Roger Daltrey – or I thought he did. And carrying home on the bus the inedible
food that we’d made in domestic science. And sitting as near to the back
of the top deck as you could, as that’s where all the cool people were.
And realising that bus travel was cool, when the Jam mentioned it in That’s
Entertainment – ‘travelling on buses’ was part of our urban youthful identity.
Or something. 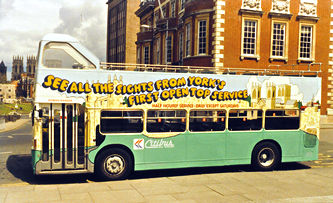 This proclaims that it’s one of the buses in York’s first open top service. The tour buses are now a familiar site in York. I remember when they started, and I knew someone who worked on one, and I always hoped that he wouldn’t say hello over the microphone they used to present commentary on the local sights of interest. It would be even worse now – "And on the left, Lisa, one of York’s ancient monuments".