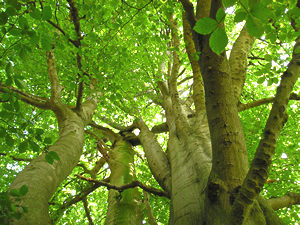 The unsuccessful campaign to save the Irton beech tree has provoked much thought regarding trees in our familiar landscapes, and why we care about them so much. I went in search of relevant poetry, and as I expected, found poetry aplenty.

Through the ages we’ve cared about our familiar trees, protested against their felling. These poets of the past lament trees lost suddenly, felled for development, or on a landowner’s whim. There would be little opportunity to protest against the felling, in the days before Tree Preservation Orders and public participation in planning issues. The loss of familiar trees provoked instead poetic protest and lament, usually after the event.

If John Clare or Charlotte Mew or Brian Fairfax had been around now, they might have been up that beech tree in Irton. And maybe they were, in spirit.

It is not for a moment the Spring is unmade to-day;
These were great trees, it was in them from root to stem:
When the men with the ‘Whoops’ and the ‘Whoas’ have carted the whole of the whispering loveliness away
Half the Spring, for me, will have gone with them.

It is going now, and my heart has been struck with the hearts of the planes;
Half my life it has beat with these, in the sun, in the rains,
In the March wind, the May breeze,
In the great gales that came over to them across the roofs from the great seas.
There was only a quiet rain when they were dying;
They must have heard the sparrows flying,
And the small creeping creatures in the earth where they were lying –
But I, all day, I heard an angel crying:
‘Hurt not the trees.’ 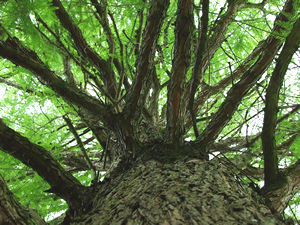 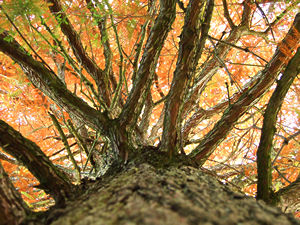 Old elm that murmured in our chimney top
The sweetest anthem autumn ever made
And into mellow whispering calms would drop
When showers fell on thy many coloured shade
And when dark tempests mimic thunder made –
While darkness came as it would strangle light
With the black tempest of a winter night
That rocked thee like a cradle in thy root –
How did I love to hear the winds upbraid
Thy strength without – while all within was mute.
It seasoned comfort to our hearts’ desire,
We felt that kind protection like a friend 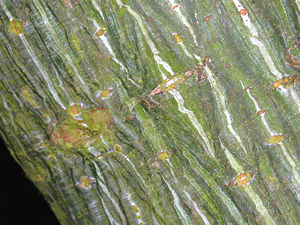 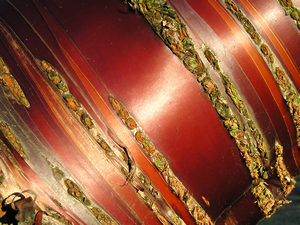 Two hundred years before Facebook and Twitter, a good way to protest against the imminent felling of a tree might be to get a well-known poet to write about it. Thomas Campbell penned a poem on behalf of a beech tree in Scotland. In honour of the Irton beech, it seemed best to quote this one in full and give it its own page.

I’ve written elsewhere about our fascinating local Fairfaxes. Brian (or Bryan) Fairfax, a cousin of Thomas Fairfax, wrote about the felling of local oaks, on the Fairfax estate at Nun Appleton, not far from York. We might think that our poetic feeling for trees is a product of modern sensibilities. Brian Fairfax’s poem dates from 1679.

‘The Vocal Oak’ is subtitled ‘Upon cutting down the woods at Nun-Appleton – Facit indignatio Versus‘. The Latin part roughly translates as ‘written in anger’. The reasons for cutting down the Nun Appleton trees may have been different – commercial reasons then, fears of tree root damage now – but the feeling about the felling is the same.

Brian Fairfax associates the trees with his cousin, the famous Parliamentary General, Lord Fairfax, who retired to the estate at Nun Appleton after resigning his military command. Lord Fairfax is seen to have had proper respect and fondness for the trees, and protected them – as the ‘Vocal Oak’ remembers:

The noble Lord to whom I lately paid,
In winter shelter, and in summer shade,
As my just tribute;—he did me defend
From the injurious hand of foe or friend.
In vain the subtle axe of him did crave
It might a shaft from the next thicket have,
To cut us down: he kept us still to grace
The country, and adorn this pleasant place

… So strong’s the hand of luxury and pride,
What heart of oak can its fierce blow abide?
So keen’s the axe that’s managed by that hand,
Oaks are mown down like grass at its command. 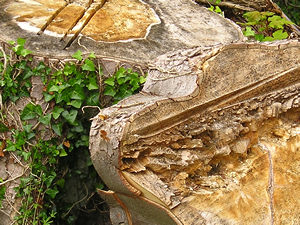 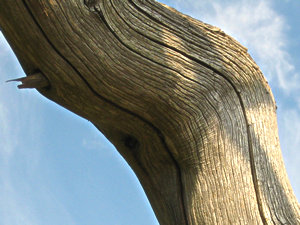 Charlotte Mew – ‘The Trees are Down': text of poem and background information from Laudator Temporis Acti

Brian Fairfax – ‘The Vocal Oak’ – in The Fairfax Correspondence, on Google books

The most well-known poem on the subject is probably ‘Binsey Poplars‘, by Gerard Manley Hopkins. Remembering a line from this poem sent me off on the search for similar poems.

Cowper’s poem ‘The Poplar Field‘ may also be of interest … though it’s quite depressing.

There are no doubt others – if you know of any impressive examples, let me know.

Perhaps pertinent to the current situation:

‘A fool sees not the same tree that a wise man* sees.’

*or indeed a wise woman. A lovely female ‘tree sprite’ was guarding the Irton tree, at the time of writing.

Since this page was compiled, the Irton beech tree has been felled. 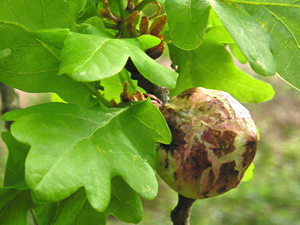 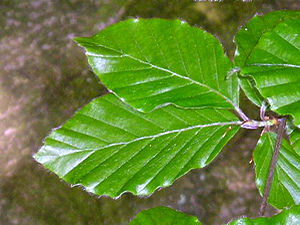