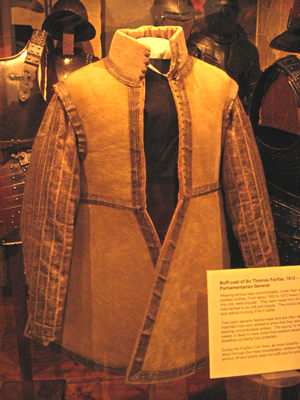 I’m sure many of us, while investigating the varied delights of the Castle Museum, have rushed past the military section. All that fearsome weaponry isn’t everyone’s cup of tea. But among the military hardware from centuries past is this significant item of clothing: ‘Buff coat of Sir Thomas Fairfax 1612-1671, Parliamentarian General’. The nearby ‘diary extracts’ of the siege of York aren’t authentic, but I’m assuming this buff coat is.

It’s rather impressive that this 17th century garment has survived the centuries. I’m not sure how it ended up in the Castle Museum. I’d love to know, but cuts to services mean there’s apparently no one to ask, and I’ll have to wait until at least 2014 for an answer. (See update, below.)

Buff coats, made from cowhide, were worn in battle, usually under armour. The information displayed alongside explains that the phrase ‘in the buff’ – meaning naked – may have come from soldiers fighting dressed in buff coats, without armour, and therefore not fully protected.

It didn’t look to be very large – though hard to tell as it’s in a glass case. (Shame that the modern trend to allow the public to handle historic exhibits hasn’t extended to textiles, as it would be a grand thing to try on Thomas Fairfax’s coat. I’d be first in the queue. I might even queue overnight to be first in the queue.)

These garments apparently became status symbols, and were treasured, valued more than other garments might be. See Dressing the Elite, in the links below.

Related pages on this site: Thomas Fairfax is buried at Bilbrough, near York. There’s a memorial to Thomas and his father Ferdinando in York Minster.

Wikipedia page on the buff coat

Extract from Dressing the Elite: Clothes in Early Modern England – an interesting account of John Hodgson’s deep attachment to his buff coat.

Apparently some of Thomas Fairfax’s armour was on display at the Yorkshire Museum some years back. I’ve emailed for confirmation as to whether they still have it, but haven’t had a reply.

If you’re bored with 21st century fashions, you could buy a carefully-crafted modern replica buff coat.

My email enquiry via the form on the Yorkshire Museum website wasn’t answered, but thank you to the correspondent who let me know that the buff coat was a gift to the museum in 2004, from a descendant of Sir Thomas, and that the armour was displayed temporarily in the Yorkshire Museum in an exhibition some years ago, but is part of the Castle Museum collection.