Conserving what we can: the remains of Rowntree’s

Following on from the page on the old factory clocks, and the YouTube slideshow of photos of Rowntree’s, it seems a good time to share a few photos taken earlier this year of the buildings remaining on Haxby Road. Particularly as several letters to the local paper recently have raised concerns about the grounds around them. 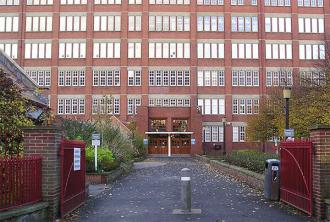 This, of course, is the main factory frontage. The Cream Block. It’s not handsome, but does say ‘factory’ to you. Quite forcefully, actually: ‘Factory’ with a big capital F.

This photo was taken back in 2004, when the gates were still open.

The fact that it’s not an attractive factory means I haven’t taken many photos of it. Only this one when the building was still occupied, but several this year, since it hasn’t been. The factory photos can be enlarged, should you wish. 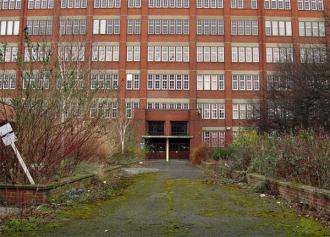 March 2012. It doesn’t take long for nature to reclaim a place. The gates are closed, and moss creeps over the path no one walks on now. The sign sinks slowly to the left. 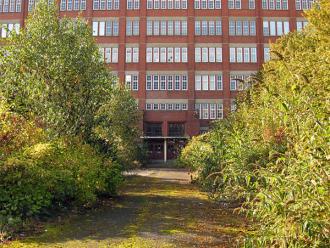 October 2012. The summer’s growth in autumn, but still big and green and billowing. At least the brambles and buddleia are wildlife friendly. I wonder if anyone’s removed the toaster and other rubbish I noticed dumped behind the railings. 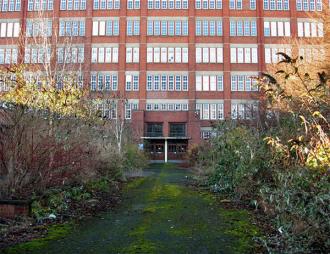 December 2012. All dying back now for winter. Leaving natural debris and human litter in drifts alongside the once well-defined route into the works, softening the landscape. The brambles and buddleia have dropped another year’s seeds.

Somewhere around here there is, or was, a rose garden. 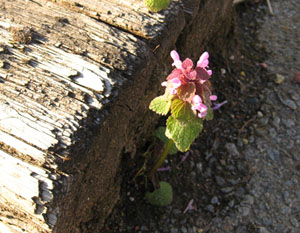 Round the back, a large open space awaits its new use. If you wander in by the perimeter fence you can still see where the trains used to come in and around the site. I thought there was nothing left, but noticed a railway sleeper or two, small reminders. The evening sun lit a dead-nettle happily growing from the end of one of them.

Back round to Haxby Road now, via the cycle track once train track.

All ssssh now, quiet please, we’re going to the library.

By Lisa @YorkStories • 29 December 2012 Industry
Tagged  factories, Rowntree
To link to this page's proper location please use the > permalink