These buildings are hidden away behind York Art Gallery. Most people who have seen them think that they’re just a load of scruffy asbestos-ridden sheds. But they’re more interesting than that.

I went searching for accurate facts after noticing a lot of contradictory information on the web and elsewhere. The info below was compiled from dusty old volumes of council minutes, and various other sources (full list at foot of page).

“Your Committee have agreed to raise no objection to the requisitioning by the Ministry of Works of a site at the rear of the Art Gallery for use as a Leave Club for members of the Royal Canadian Air Force, subject to certain details which they have authorised the Town Clerk, City Engineer and Curator to settle.”
– Art Gallery Committee, February 1944 (York City Council minutes)

It’s probably not feasible to keep the entire ‘hutments’ complex, but part of the structure should be retained on site. 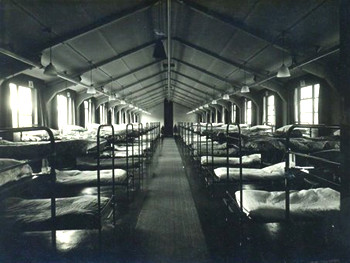 Photos (interior and exterior) of the buildings in the 1940s, as the RCAF service hostel

More detail on the years of educational use

General background and opinion on the proposed demolition

For more info and interior photos of the buildings in recent months, search for hutments York on Google.

York City Council minutes; Annual Reports of the Yorkshire Philosophical Society; 17 Feb report prepared for CoYC meeting (PDF); documents submitted with the ‘big wheel’ planning application, eg this one and this one (PDF files); The history of the Yorkshire Museum and its geological collections, B J Pyrah (York, 1988); letter from Mr MacPherson of Ontario (held by the Yorkshire Air Museum) … and recent web-based photo galleries by urban explorers and ‘guerilla historians’ – thank you chaps, for showing us what we couldn’t get to see for ourselves.