Following on from the previous page, and the page before that, I’m returning to the Bile Beans ad, as 1) I’ve made the effort to go up there and take a photo of the restored version of the first restored version, and 2) there’s a Twitter storm about the comma. Well, more of a mild breeze of concern. But anyway …

Here’s Baz Ward’s painting of the scene, painted in the late 1970s, followed by a photo taken by me this week. 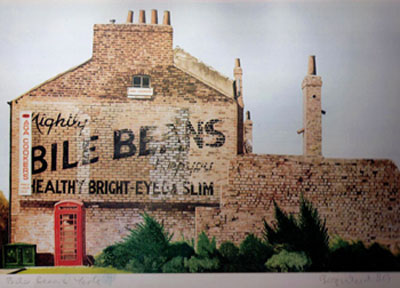 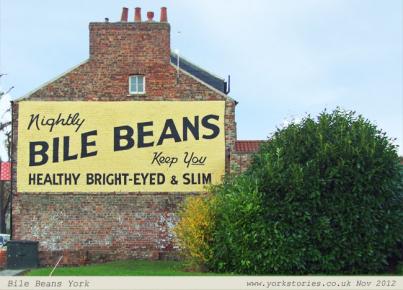 A common factor in the two scenes: the wonky chimney pot on the left. Another, the unattractive green box on the left at the bottom of the wall.

In 2012, bigger shrubbery, fewer chimneys, brighter ‘ghost sign’. Altogether a less charming scene, and one missing the cheery highlight of the red phone box. As mentioned earlier, these are slowly disappearing.

On Twitter, there’s been some concern over the ‘missing’ comma, following the recent repainting. 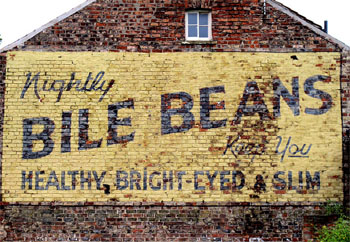 Here’s a photo taken in recent years. (Photo copied without permission from a page on blipfoto.com which has taken my text without permission.) Looks like a comma, after the word ‘healthy’. But as @ghostsigns said on Twitter: ‘I always suspected that the comma got added after the restoration, its appearance just isn’t consistent with the rest.’

So did someone pop along one night with a paintbrush, to add in the comma? Was it the same person who adds missing commas to information signs in the library? Was it someone wanting to reinstate something of the original, long-lost version?

Did this have a comma? 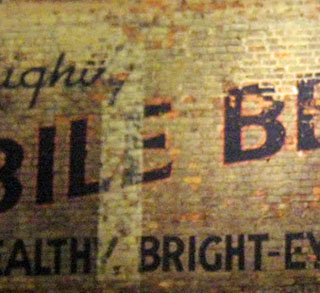 Baz Ward’s painting, from around 1978, doesn’t have a comma. Andy’s 1977 photo has something that looks like a comma, but could just be a mark on the brickwork. A bit of it here, enlarged – make your own mind up.

Anyway, it was all covered already by the 1986 restoration.

Just visible on the (digitally enhanced) image above is another long-lost detail, which I wouldn’t have noticed had it not been mentioned by Baz Ward in a recent email:

‘the BILE BEANS letters should each have a narrow red line around them. This makes a huge difference, ‘lifting’ the effect considerably. This line was very evident in my original [large] painting but was left out during the first ‘renovation’… I guess it’s too late now that the scaffolding has gone.’

I think that’s everything on the Beans scene. Except to say that it’s affectionately known by some as ‘Billy Beans’.

Comments welcome below, or on any of the other pages about it.

It’s quite astonishing how many photos exist online of this wall, all taken in the last eight years or so. Bile Beans photos, via Google Images