During a wander down Fossgate recently I had a look through the closed doors of the now empty Army and Navy Stores. Not quite empty. Near the door a handwritten sign advertises ‘umbrella / walking stick stand £10′ with a phone number underneath. Alongside the stand also stand a pair of dislocated mannequin legs, wearing brown suede shoes and what appear to be black long johns, with another sign offering this ‘trouser / jeans display’ for £3.

Behind this, bins put neatly in a corner and the old wooden drawers with small brass label holders. For ‘work gloves’ and what looks like ‘LNER gloves’ or perhaps ‘liner gloves’. The drawer unit itself, beautifully aged and battered, is marked ‘not for sale’. 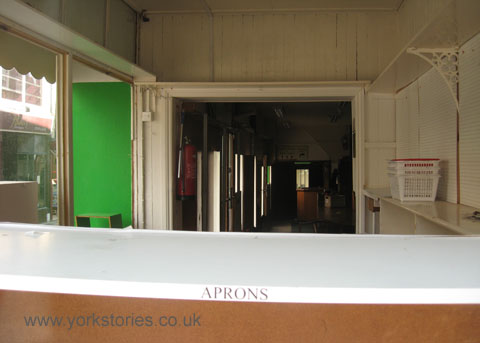 A very manly place, the Army and Navy Stores, as its name suggests. Round the corner, in its window facing onto Pavement, a label left behind on the window display records that it also sold aprons, perhaps not so manly. But I remember it as a man’s shop, and have been asking the man of the house if he remembers buying things from there. We think perhaps that the blue cotton jackets we both wore in the late 1980s came from here. He had two and gave me the smaller one. His apparently was a ‘railwayman’s jacket’. Was mine a railwayman’s jacket? I asked excitedly. Why didn’t you tell me? Like I would have cared back then. 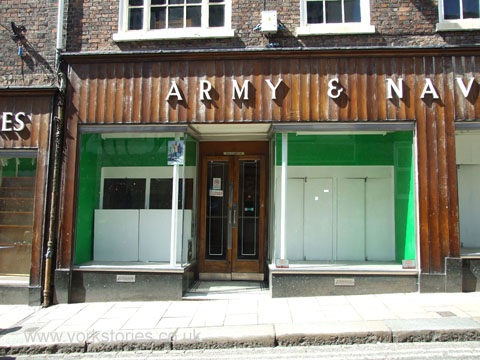 The late 80s seems like long enough ago, but the shop had been here for decades before that. It closed last year after 93 years of trading. Soon to be another pub/eaterie, it seems. 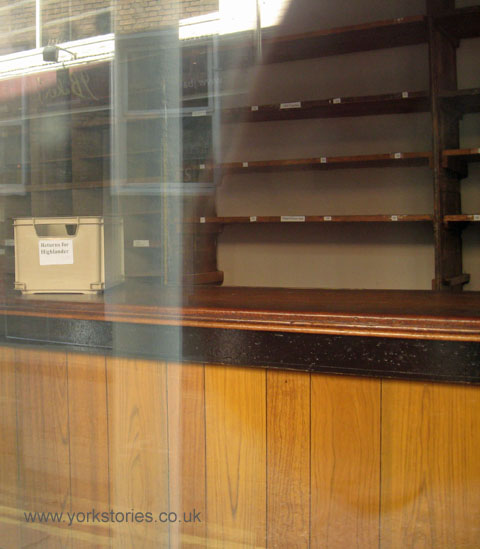 The shop is well-known for having old fixtures and fittings, and we value this kind of thing now more than we used to, so I imagine the refit will probably preserve as much as possible, as Loch Fyne did with the old Stubbs building further down Fossgate.

Before moving on — I had to go and find these, packed away in an old suitcase. I wonder if other people keep old clothes for sentimental reasons. These are the jackets mentioned above which I think came from Army and Navy Stores, and it’s about 25 years since they were worn. My quick research suggests that the one on the left, grubby and faded, with rubber buttons, is a railway worker’s jacket. The one on the right, not so sure. Maybe someone reading had similar and can confirm that Army and Navy Stores in York sold these. Looking at them takes me right back to 1988, and brings thoughts of Sunday lunchtimes at the Spread Eagle, down the road on Walmgate. More on that another time perhaps.

Your thoughts and memories welcome, as always.

By Lisa @YorkStories • 13 June 2013 Shops, businesses
Tagged  Fossgate, shops
To link to this page's proper location please use the > permalink