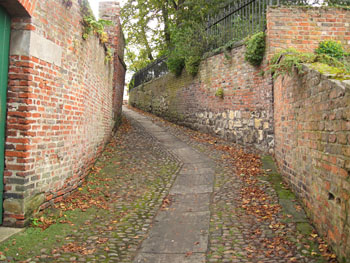 Recently we’ve spent a lot of time on the grandly-named ‘Lord Mayor’s Walk’, discussing the Bile Beans ad. Here on the other side of town is Carr’s Lane. A thoroughfare not deliberately created as a tree-lined ‘Walk’ named after a dignitary but one of the narrow lanes worn through the landscape centuries earlier, in a more natural kind of fashion.

It used to be a Kirk (church) Lane, so called because of where it took you. At some point it became known as Carr’s Lane, after our famous architect of that name. I’m not sure why and I don’t care, I just like to admire its loveliness.

It is fondly described in George Pace’s 1970s book on Bishophill, and in the Hutchinson and Palliser guide to York, published in 1980. It says that Carr’s Lane –

… was the most magical of York alleys, a strip of paving through cobbles, tight between high brick walls, trees high up behind a fence in Bishophill churchyard, a little cottage growing out of the wall at a kink in the path; uphill to the Golden Ball, a Cecil Aldin pub, or downhill to the Lawcourts skyline across the river it was a total delight. The fence has been smartened up; the trees are fewer, the walls lower; the little cottage has been replaced by well-meant flats. The magic has irretrievably gone.

There’s so much love in that description, so much admiration and attachment, and an obvious sense of loss. I’m not sure everyone ‘gets it’, this kind of emotional response to the feeling of a place, but I do.

I first took proper notice of Carr’s Lane, and took photos of it, a quarter of a century after that paragraph was written. I hadn’t read the book at that time, and wandered down this old ‘Kirk Lane’ with no expectations, and no awareness of any magic lost. Indeed I re-found the magic afresh for myself, because I don’t remember, never knew, how it was before the ‘tidying’. It still is crooked, still has patched-up walls made from different materials, and characterful paving beneath. 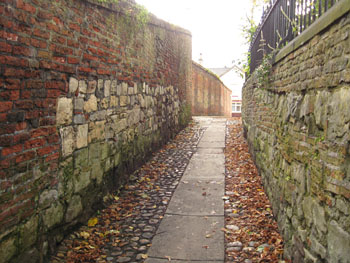 Modern additions may have spoiled the view downwards to the riverside, but looking upwards it’s still the same, with a glimpse of the Golden Ball pub, and that golden ball in the sky spilling light into the old Kirk Lane late in the afternoon.

The wider point this brought to mind, while I was reflecting on the views quoted above, is that despite the alterations and demolitions every generation discovers some magic afresh, finds the beauty that is left.

This short imaginary walk up Carr’s Lane has brought us to Cromwell Road. Opposite, the pub mentioned already, which has always been worth a visit, even more so now (see links below). To our right, the charming old churchyard where Gentle Vickers, veteran of a famous battle, was laid to rest. Please take a moment to visit him.

To our left, hidden behind old red brick walls, the Friends Burial Ground. Where we’re heading next.

The Golden Ball is now a community-run pub (The Press, York)