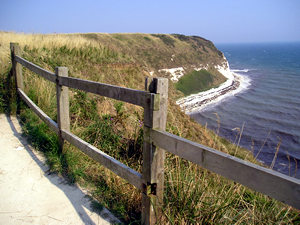 We approached the beach at South Landing, where the narrow road you walk down suddenly stops, and there’s the big blue stretch of water in front of you, and a great icy gale blowing in off the North Sea. A few brave souls were actually sitting on the beach in very few clothes, demonstrating true Yorkshire grit.

After admiring the view of the sea, and the fortitude of the sunbathers, the strenuous ascent warmed us up. This view is from the top of the cliff, looking north. 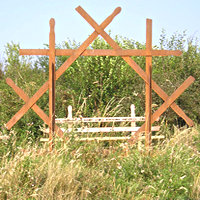 We weren’t expecting anything except the usual clifftop path, but found this interesting formation of crossed pieces of metal, with a bench behind it. 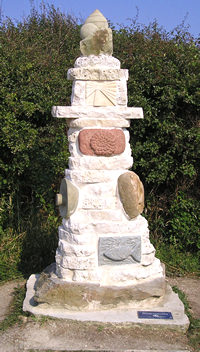 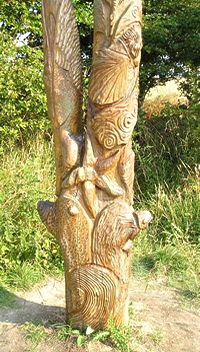 It became clear that we were on some kind of sculpture trail. It was very exciting to find these fascinating structures on the cliff top paths.

The South Landing Heritage Trail, as I discovered when Googling for info on our return. The sculpture trail is the result of work by local young people, via the ‘Young Roots’ programme. It’s rather nice to chance upon something like this. I love sculpture trails, and the way it’s becoming more common to place works of art alongside public rights of way. We admire the landscape created by Mother Nature, but it’s also good to see what fabulous things people can make. 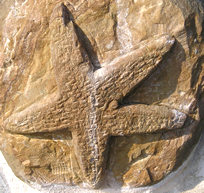 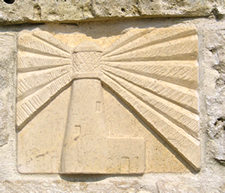 These photos show details from the ‘Lighthouse Sculpture’, shown above. 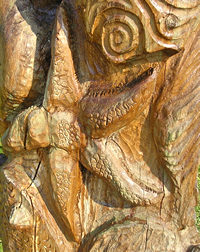 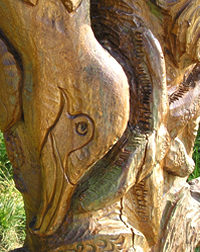 The carved details are from the wooden totem pole. The carving on the two sculptures shows features of the coastal landscape in this area.

In a report on the project on the Flamborough website, one of the young people involved in the project writes: ‘I loved the carving, I learnt how to carve wood and stone . . . they are totally different, with wood it’s more forgiving than with stone, when you hit stone too hard bits can fall off that you don’t want to, whereas, wood if you hit it to hard you just take the chisel out and start again.’ (Eloise Mummery and Flamborough Young Roots Group, from the website Flamborough UK) 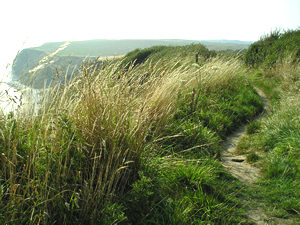 The sea and coastline was alongside us for the first part of the walk, as we admired the carvings on the lighthouse sculpture. As it’s August, the grasses have formed seedheads now and move constantly in that bracing breeze coming in from the North sea.

The path bears inland after a short distance, so we left the sea behind, but not the sculptures, which are carefully positioned throughout this circular trail. 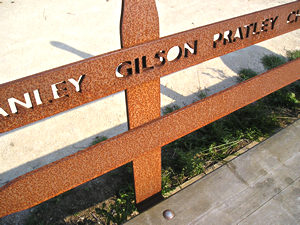 At various points on the walk are these benches, with weathered metal turning that wonderful shade that always makes me think of the Angel of the North. I’ve been thinking, looking through these photos, how the sculptures placed in public spaces have to suggest something personally relevant to the community, otherwise, it seems, they just get vandalised. These benches are about as ‘personal’ as it gets, as they have names of families from the local community cut into the cross pieces. Inspired.

Inside the whale and other stories

After following the path away from the clifftop, we continued to follow the obvious trail through a more wooded area, thinking that we’d perhaps seen all the sculptures by then, and were heading back to the car park. 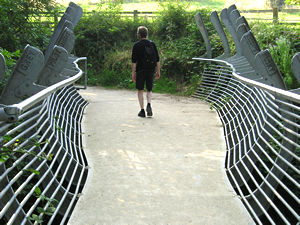 Then found this amazing bridge across a beck. At first, I noticed the names stamped into the curved steel supports. And noticed the beautiful curves of the barriers on the sides. It is of course based on the skeleton of a whale – as whales have washed up on local beaches – and crossing it is rather like being inside one – (though rather more comfortable, I imagine). 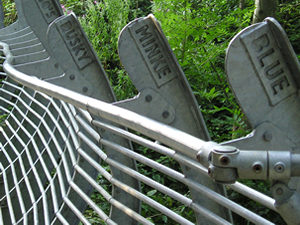 This is the ‘Bridging the Gap’ bridge. The information on the Flamborough Community website says that it replaced an old wooden bridge, which had become unsafe.

Rather than replace the bridge with another boringly functional one, the Young Roots project designed for the community this inspired creation. 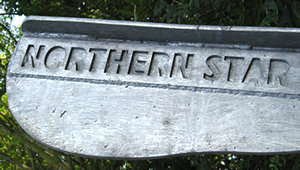 It says ‘Northern Star’, and though I guess this was the name of one of the fishing boats, it made me think of all the ‘northern stars’ who made this bridge. 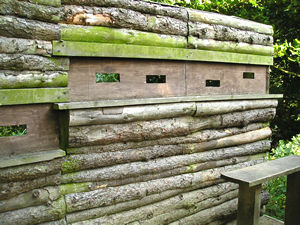 This rather intriguing structure, on the edge of the path after we left the bridge, is a bird viewing station, and on the other side of it are bird tables and feeders. 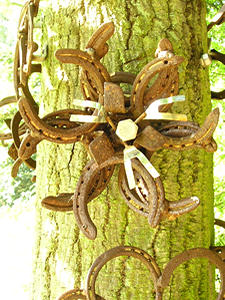 There’s then a more open grassed area, with picnic tables, and these interesting sculptures on the trees – this one made from old horseshoes.

Back in my schooldays, hundreds of years ago in the 1980s, I don’t remember us ever doing anything as interesting as this. Girls in particular. We had to do cookery and needlework, rather than the woodwork and metalwork I would have preferred. Making things from wood and metal means making things that last – something that couldn’t be said about soggy toad-in-the-hole.

That women can become accomplished in traditionally ‘male’ skills is emphasised in comments by Eloise Mummery, in the report on the project on Flamborough UK: ‘I love welding, I love being able to do things men think women can’t do, I can also mix cement now as well’. 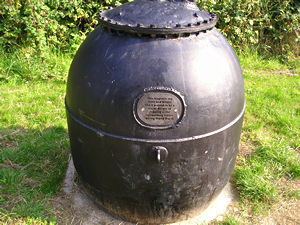 This rotund object looks rather cute, until you realise that it’s an old sea mine. Now unarmed, thankfully, and with a small plaque that says that these mines were ‘a major danger to shipping in the surrounding waters during World War II.’ 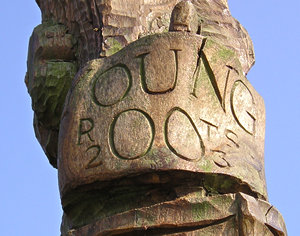 I want to thank everyone who worked on this project, for creating such a beautiful sculpture trail.

To anyone who is feeling down about the state of the world, and feels that there’s no respect for the past, and no hope for the future, I recommend this heritage trail. It’s a very inspiring walk.