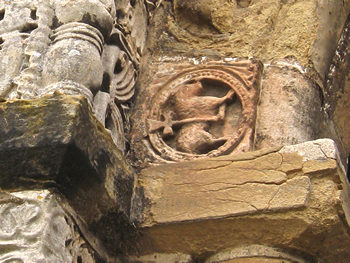 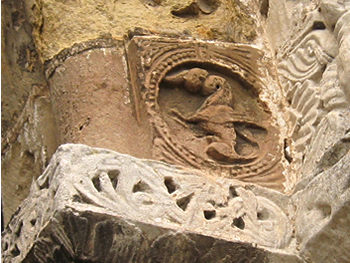 One sunny summer Saturday afternoon I cycled from York to Alne and beyond. The target of the excursion was the church at Alne, and its doorway, pictured above. The Pevsner guide calls it ‘Fully Norman and typically Yorkshire’, and mentions its ‘fancy animals’. Ever since I met my first carved Norman doorway at St Mary’s church, Kirkburn, I’ve tended to seek them out. 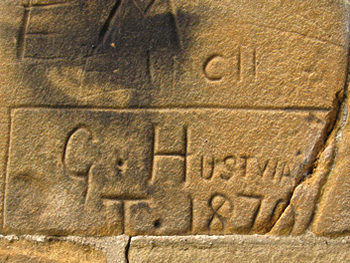 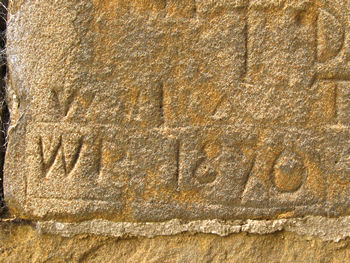 Round the back of the church, what appears to be Victorian graffiti, scratched into the presumably soft stone, by a bricked-up doorway. It could of course be a convincing fake, but I’m sure that date says 1879, and the other carving 1870. 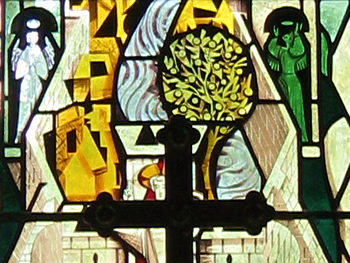 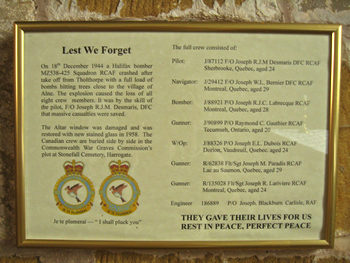 Inside the church, an obviously modern east window. Its modernity is explained by a sign on the wall – it was created in the 1950s to replace a window destroyed in the war. Another bomber crashed here, in Alne village, damaging the window of the church, and other properties nearby. There’s a framed memorial to the crew, who were Canadian airmen based at RAF Tholthorpe. 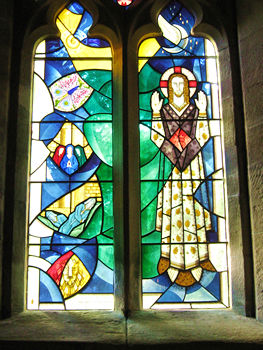 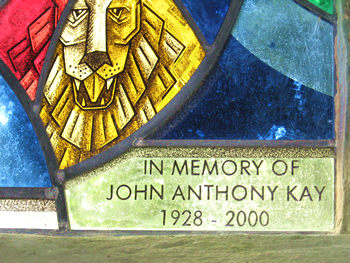 This stained glass, designed by S D Collins, is a memorial window to Dr J A Kay. It’s even more modern, dating from 2002. It is a particularly beautiful piece of work. I’m beginning to appreciate modern stained glass. 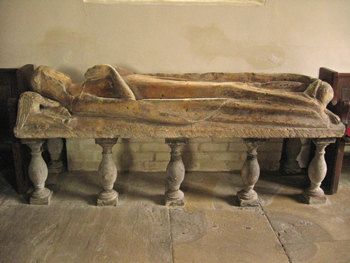 Centuries older, this worn and damaged effigy in the Lady Chapel. It dates from the early 14th century, and according to the helpful information provided in the church, is believed to be a memorial to a member of the Ellerker family from nearby Youlton Hall.

Grand monuments to aristocratic people can sometimes make us working-class folks feel a bit distanced, but this one is so worn and somehow touching it didn’t have that effect. Particularly because the information on the wall points out the (rather lost) detail: ‘The broken figures at her head are angels waiting to catch her soul in a veil and take it to heaven’. 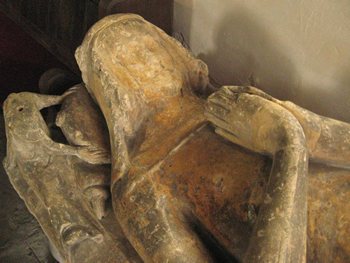 The photos on this page were taken in July 2009, but because I was involved with writing a book, this website was neglected for a time, and this page has been added to the website a year later. Inbetween times, I lost a dear friend, who took me in when I left home at sixteen. She was a true Christian, not just in word but in deed. Some people change your life, and pick you up and in some ways save you, and you don’t always get to tell them. I was lucky this time that I did get chance. Over the years I shared many joys and enthusiasms with her, and she always responded with equal enthusiasm. The last joyful thing I told her about was cycling to Alne.

I’m an agnostic, but would still like to believe that good people do have angels waiting to catch their souls and take them to heaven. There would I think have been a queue of angels around Rene’s shoulders.

So, this page was compiled in memory of Rene Parker, whose spirit I hope will be with me, on all my journeys.