Memories of the air raids on York

Audrey was around ten years of age when war broke out, and remembers the air raids on York, including the most destructive, in 1942 – the ‘Baedeker’ raid. 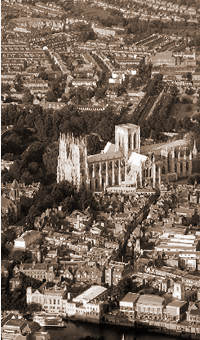 I lived in Blossom Street at number 20 which was the Forsselius Garage then. We lived over the garage. Next to the working man’s club. My father worked at Forsselius which had another branch on the other side of the road too.

In wartime it was turned into a National Fire Station. My Mum Vera Matthewman used to go down and man the telephones for them and during an air raid my sister and I were taken down and laid on bunks behind her. My dad used to go out on the engines if he got chance.

York was damaged badly because of the railway of course. Bombers followed the Ouse when the moon was up and they could see it and they could pick out the bridges and began their attacks. One of course hitting the Guildhall, but missed the bridge thank goodness.

The old Church in Coney street was hit and stood for many years as a damaged reminder. Leeman road was badly hit because of the railway.

The Convent got a bomb on the Nunnery Lane side and nuns were killed. I remember the bomb coming down and hearing the whistling sound and mum holding us down under the dining table. There was silence then a muffled crump.
Dad made us stay down and he went off to see what happened. Everyone was shocked to hear it was the Bar Convent that had been hit.

Photo credit: from an aerial view of York © DCAP licensed for reuse under the Creative Commons Licence

The York Press website has an image of the bomb damage to the Bar Convent in the April 1942 raid.