A walk through wartime York

Stephen was born in York in 1929 and was 10 years old when the war began, 16 years old when it ended. These are Stephen’s memories of living in York during the war. He also witnessed the ‘Baedeker raid’ on York.

See also: Audrey’s wartime York and her memories of the air-raids. 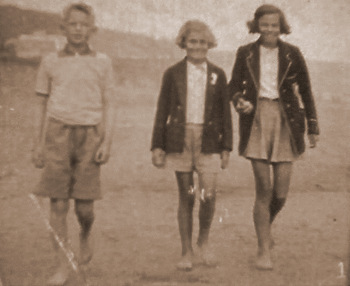 Photo: Stephen with his cousins Barbara and Beryl, on the beach at Filey, 11 August 1939

“I endured the war as a young lad, from 10 to 16 years old, doing my bit as everyone was expected to, I lived and was nurtured at Fossway in York, my stepfather helped to repair Halifax bombers on Rawcliffe aerodrome, my mother was assistant manageress at Bettys cafe, near the Mansion House, offering refreshments and good cheer to those same airmen, on respite from the war, my next eldest sister worked at Rowntrees, putting cordite into ‘ammo’, my eldest sister worked at Cooke Troughton and Simms helping to make tank periscopes and range finders, and although I was just a Nunthorpe Grammar schoolboy, I did my bit. I delivered papers early in the morning, picked up from Smith’s in Coney St, and delivered all along the Mount, where ATS girls were stationed, and through Dringhouses, before continuing to school, past all the Observer Corps stations, and Ack-Ack batteries on Knavesmire.

Getting home in the evening, instructions and money was left to ride my Mam’s bike back into town, for the onerous duty of queueing for whatever off the ration food could be found in various shops along Goodramgate, such as ‘butchers bones’ and offal, onions, Wrights pork pies, and so on.

My Saturday job was as delivery boy at a fruit and veg shop in Lord Mayors Walk, near Monk Bar, and my evening job, after doing homework, was training as an Aircraft Spotter, and messenger boy, used during air raids when phone lines were down. I trained at Rowntrees dining Hall along with other school friends, and felt really useful!

I just wish you could have been with me and my chums, on the wartime walks we went on in York, the place was vibrant, alive, and had an ambience that doesn’t exist in today’s world.

I well remember trolling through York on an evening, with my school chums, looking for rear doors to be open at Picture Houses, in order to sneak in and get a free view of Fred Astaire, and Betty Grable et al! The most favoured places for this activity were George’s Cinema, near the Castle, and the Picture House in Coney St, and therein hangs my Airmen story.

If these Heroes of ours were out on ‘ops’ that night, Coney St would be deserted, when we wended our way home after a ‘freebie’ at the cinema, but when the ‘dromes or the German targets were clouded over – ‘socked in’ they used to say – Coney St was more like Coney Island Fairground, awash with blue uniforms of several hues, Free French, British, American, all determined to enjoy what may be their last night out ever. These young, bright fit men, the best our country and allies had to offer, out on the ‘razzle’ were a sight for a young chap to behold and admire.

My two nubile sisters were of a mind to get involved with these tempting targets too. Wriggling into corsets, slapping on the make up, drawing the line down the leg backs, and off to the Albany Ballroom in Goodramgate, or De Grey Rooms in Exhibition Square, both places magnets for ‘Boy Meets Girl’, to get familiar before it’s too late. Strict instructions from Mam tho – No Messing About In Back Alleys afterwards, bring ’em home here, we’ll feed ’em and lend ’em our front room – before wending back to camp, in the early hours. With this stricture in mind, neither girl came to any harm, and I met dozens of these Blue-Uniformed Heroes this way, and have remembered and honoured each and every one for all of the 65 years since.”