This land is our land? King’s Square 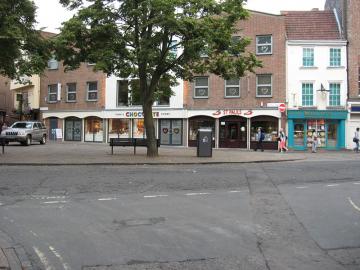 Not a square, more of a triangle. Quite a small one at that. Though I hadn’t really thought about its shape or its purpose or its size until a recent planning application brought the place into focus. It’s not photogenic particularly, and I had no photos of it, but have just been up there to take some, and to try to see it afresh, and more objectively.

Having seen it more objectively, my initial reaction seems to have been correct, that there’s not enough space here for café tables as well as the street performers and the vendors who use it now. 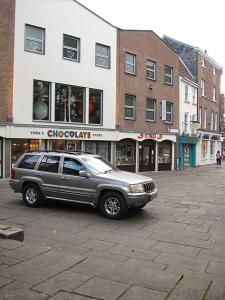 The recently-opened ‘Chocolate: York’s Sweet Story’ has made the application for a number of outside tables. This visitor attraction (which includes a café) was warmly welcomed and certainly looks good from the outside.

I’ve never been in, and can’t imagine I will. We York residents are already blessed with cultural delights we can visit for free with a YorkCard, and chocolate doesn’t interest me particularly. The social history of our local confectionery industry does, but we can find information on this from many other sources, including family members. So many of us had a relative who worked at one of the local sweet factories at some time or another. I’m probably not alone in having had several childhood fillings and developing a phobia about dentists as a result of the perk of free/cut-price sweets, brought home from the factory. 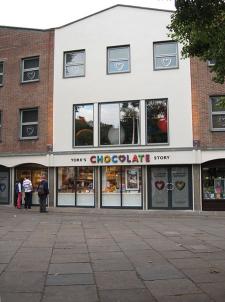 It seems appropriate to mention this memory of ‘old York’ because this application for outdoor seating seems to have become one of those symbolic moments where ‘old York’ meets – well, I can’t call it ‘new York’, so let’s call it ‘gentrified York’. And battle has commenced, via a petition, and many objections to the application, via the council’s website.

Those objecting aren’t doing so from some morbid ‘fear of change’ – they’re people with a proper understanding of the place applying common sense. This tiny space has adapted to many different uses, but the use it has settled on and the use that suits it best is the one it has just now and has had for many years. It’s the space for street performers and their audiences, and mobile vendors selling food and drink. 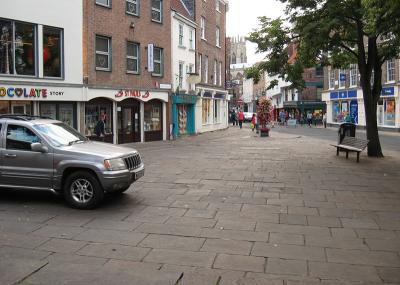 This photo is from the raised area where the performers do their thing. I hope it makes clear what the people who are familiar with this space already know: that there isn’t enough room for café tables. The street performers aren’t generally ‘person with guitar’, they’re more the fire-eating, sword-swallowing, big acts needing a big space.

While I was getting this page together, the applicants submitted a revised plan, with fewer tables, moved further back and to the Colliergate side. Near that tree, on the right. This still doesn’t leave enough room for an audience to watch the kind of entertainment staged here and, more importantly, it makes for an even longer walk from the café door to the seating area, carrying hot drinks across a busy thoroughfare in front of the King’s Court buildings.

At one time I would have assumed that such an unworkable plan opposed by so many people wouldn’t have a chance of being approved. Not sure anymore.

It never got to decision stage, as the applicants officially withdrew their application on 8 August 2012. Plan details may still be viewable on this page on the council’s website.