King’s Square: past and present

(There’s an update to this page with more information about the church: The lost church of King’s Square) 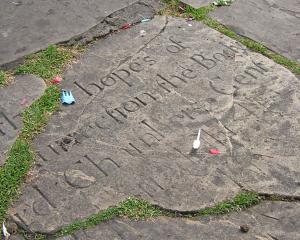 The small triangular area of land we know as King’s Square was until the 1930s the site of a church. The raised area often used as a stage by the street performers was its churchyard, or part of it. Some of the headstones remain, scattered with litter. 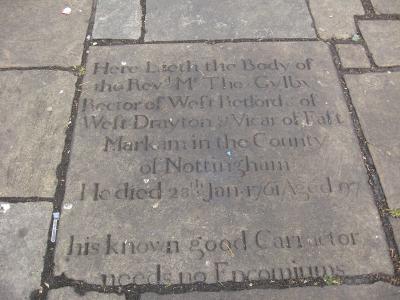 Among the 21st century debris, an inscription so clearly from a different age, containing a word long fallen from favour, and another one quaintly mis-spelt. ‘His known good Carractor needs no Encomiums’.

An Encomium sounds like something you might find in a brass band, but is defined in the OED as ‘a formal or high-flown expression of praise; a eulogy, panegyric.’ 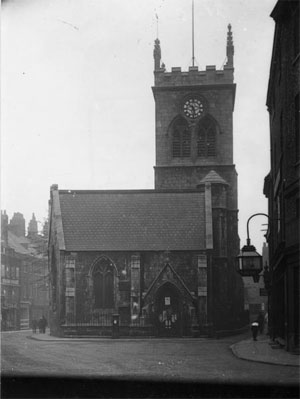 The church itself (which appears to have had two names — Christ Church or Holy Trinity) was in the central part of the square, opposite the end of St Andrewgate. Shown here in about 1910. (Photo: Imagine York, City of York Council)

Like many churches it was rebuilt in the 19th century, but became redundant not long afterwards. Here in the centre of York were so many churches so close by: on Church Street, Goodramgate, St Andrewgate, Pavement (since demolished) and St Saviourgate.

We stand watching the street performers where our ancestors once gathered to worship. Where they listened to sermons about sin and burning in hell we can now watch fire-eating, and juggling, and all kinds of other things they would no doubt have found very ‘ungodly’ indeed, on this once sacred ground.

King’s Square is now a busy public space. Just how busy is shown in a brilliant short film on YouTube by skyfilms.co.uk. It was filmed earlier this year, and shows the pedestrians and spectators in the square, gathering to watch one of the fire-eaters, then dispersing again.

Also on this website: This land is our land? King’s Square