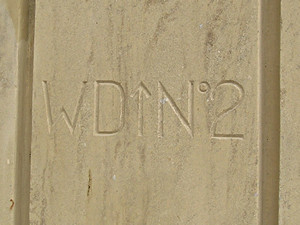 These strange markings are on one of the stone pillars of the walls around the Churchill Hotel on Bootham.

The wall and its railings date from the 19th century, though this corner piece is a 21st century replacement. The corner was rebuilt after an accident here a few years ago, when a bus crashed into the wall.

Presumably because the walls (and the building they surround) have Listed status, and because this is a Conservation Area, the replaced stone pillar had to be an exact copy of the original – complete with replica carvings.

The W D stands for War Department, as it used to be called, in the old days. Now, of course, the department in charge of military matters is called the Ministry of Defence. Interesting, isn’t it, the way these names change. 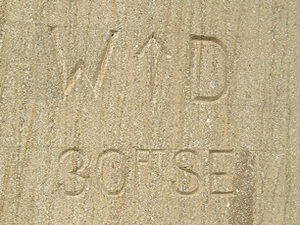 The replaced corner pillar has the carved lettering on both sides facing the street. The other end of the front wall, near the gate, retains similar markings, old and crumbling, but still visible (not pictured here).

Internet research led me to several websites which include similar examples from all over the country (see links at bottom of page).

Some, like the one above, are numbered, while others, like this example on the other side of the same pillar, include measurements. This one says ’30FT SE’, presumably indicating where the boundary starts/ends.

The building that is now the Churchill Hotel, originally built as a private house, was at one stage in its history used as military offices, hence the War Department boundary markers – as explained by C B Knight:

‘The headquarters of the North-eastern Military District were transferred from Manchester to York in 1878. A block of offices for the accommodation of the staff, popularly known as the War Office, was built in Fishergate at the corner of Melbourne Terrace, and a house in Bootham a little beyond the Asylum field was purchased to be the residence of the general officer commanding the district. This received the title of Government House, and a few years later Grosvenor Terrace was built on the land behind it.’

A History of the City of York – Charles Brunton Knight (1944) 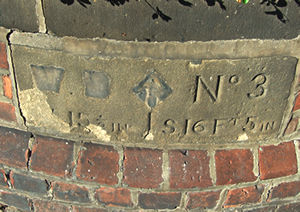 This is the boundary stone still set into the wall of the former Fishergate ‘War Office’, mentioned in the extract above. The building is now known as Tower House. The previous military connection is clear from the facade – ‘Headquarter Offices Northern Command’ is still carved in stone above its impressive doorway.

This stone seems to have had the W and the arrow and the D part obscured, though the other carved elements are left intact, including a measurement in feet and inches. 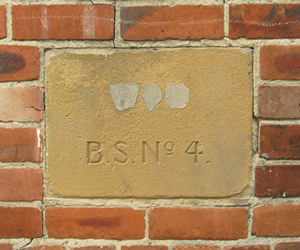 This stone was spotted recently on Blue Bridge Lane, off Fishergate. I noticed it while I was racing through the area on an invigorating evening walk, and nearly added it to my "things to revisit" list, but then managed to extract my camera from my over-full fraying rucksack.

I guess B. S. stands for boundary stone. As with the Tower House stone, the bit above it seems to have been obscured, but I think it used to be a W and a D with an upwards pointing arrow between, as in the Bootham examples.

I’ve not been able to clarify why property of the War Department had its own boundary markers, when they were introduced, why some are quite brief, while others include measurements etc. If anyone reading this has more information, do let me know via the contact form.

Examples from Perthshire (photos are towards the end of the page)