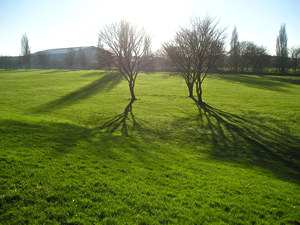 The
shortest day – 21 December 2004. According to my
research, the solstice occurred at 12.41 precisely. I arranged my walk so that I was here on Clifton Ings at that time, as it seemed as good a place as any to be – with trees and open space. The weak winter sun is there in the distance, across the river, behind the buildings of the National Railway Museum. Very low at this time of year, even at midday, and casting dramatic shadows.

Peaceful here, and no one around, except me, with my camera, taking lots of photos of these two trees. 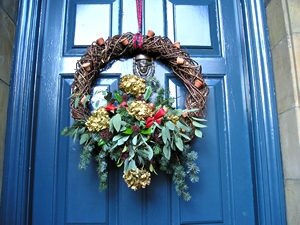 The
visit to Clifton Ings was towards the end of my walk. Before that I took
a few photos in town, around the Minster and Goodramgate area, including
this handsome festive wreath on a door. I don’t really enjoy Christmas,
or winter in general, but this rather classy wreath reminded me that some
parts of it aren’t too bad. I like the decorations, and . . . er . . . 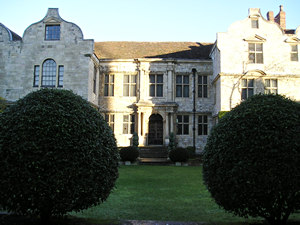 I
can’t help being miserable – it’s just so dark. Here we are at almost midday,
and it’s all really gloomy round here behind the Minster, with even the
usually cheerful-looking Treasurer’s House mainly bathed in gloom. A small
part of its facade reflects what sunlight there is. 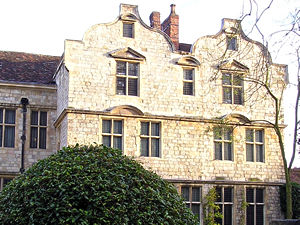 This
is a bit better – a closer photo of part of the building, from about an
hour earlier, before the sun on its very low-in-the-sky course went and
hid behind the Minster. I seem to have spent most of the morning wandering
around the Minster in a circle. I can’t help the slowness and confusion
– it’s the time of year. Perhaps we’re supposed to hide away in a warm corner
under some leaves, like hedgehogs do. 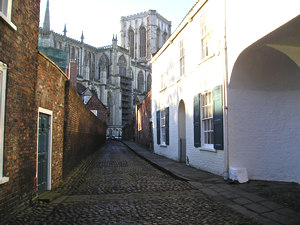 And
here round the corner in Chapter House Street, it’s all shaded and quiet
and rather grey, so thank goodness for that white-painted building, which
reflects the available sunlight. 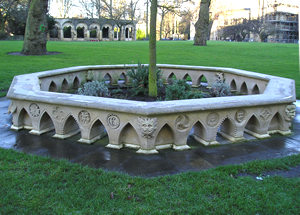 Even
in the gloomy gloom of Dean’s Park, overshadowed by the Minster, I found
something beautiful and cheering. This seems to be a herb garden, which
you can sit on the edge of on this stone surround. Very handsome. But it’s
so dark around here, isn’t it. 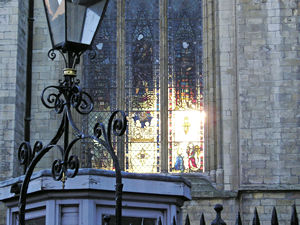 But
look, I’ve found the sun, hiding around the other side of the Minster, and
suddenly appearing here on the north side, through the stained glass windows,
which now seem lit up from within. 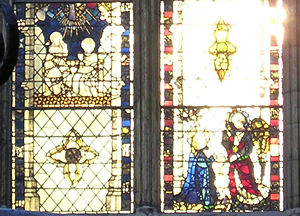 Stained
glass, from the outside of the Minster, in Dean’s Park. 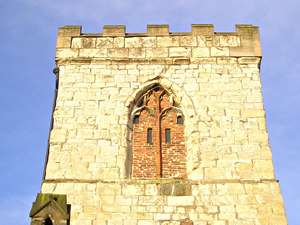 At
last, I’ve found a brightly lit bit of stone, a little way from the Minster,
on Goodramgate. The exceptional Holy Trinity Goodramgate, with its tower
all pale and cheering, and the red brick insert where its window should
be. 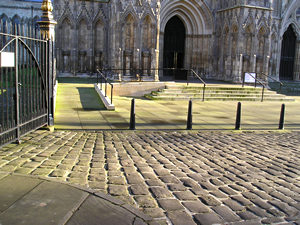 Of
course, round by the Minster’s west front it’s all rather beautiful too.
I know that this isn’t the usual view, but as I was standing here I admired
these wintery shades, of greyish stone, cobbles, paving, and the greenish
tinge on the paving. And all those different textures in the various types
of stonework. They don’t just chuck down concrete slabs and tarmac here. 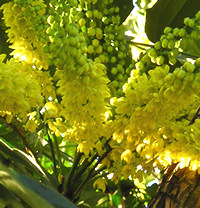 The
Museum Gardens seemed a good place to wander to, in search of winter cheer.
I found these yellow mahonias, loads of them in flower on the pathway that
leads to the riverside. 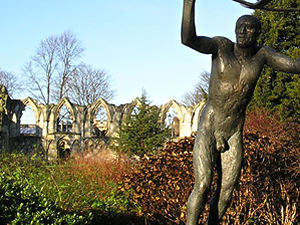 Also
in the Museum Gardens this sculpture, of a naked male figure holding up
something I can’t really identify (and neither can you, from this photo,
as I’ve missed it off) but it looked like part of a globe – maybe representing
the world. Anyway, it’s getting rather chilly now, in December, so maybe
someone should give the poor chap a coat.

In the background – St Mary’s Abbey, all lovely and ruinous and light-reflecting,
as it has been for centuries. 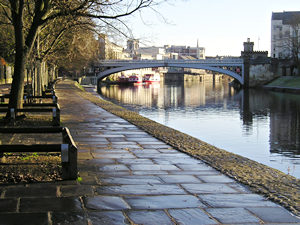 By
the riverside, at the edge of the gardens, looking towards Lendal Bridge.
On summer days, and summer evenings, lots of people sit here admiring the
view, and the rowing club are out on the river, and houseboats are moored
here. Now, it’s rather wet, and less colourful, apart from those red boats
just along the river from the bridge. 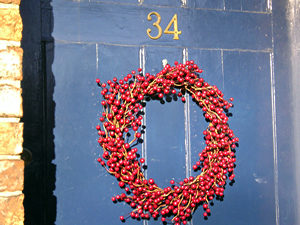 As
red is a cheerful colour at this time of the year, here’s another decorated
door, with a cheery wreath. I think this one too was somewhere around the
Minster, while I was wandering around it apparently in circles. This is
for anyone reading this page who likes Christmas more than I do, as if you
do, and you’re reading this as Christmas approaches, I wish you good cheer. 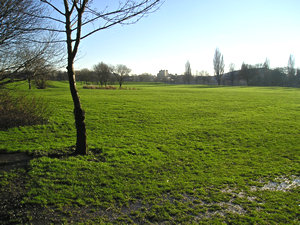 Back
at the ings, at Clifton, with a view across this green open space towards
the riverside, with the Station Hotel (called something else now I think,
but it’s the Station Hotel to me) on the horizon. The winter sky is very
pale, above the leafless winter trees, but the grass looks as green as ever.

It may be the shortest day, but I managed to make the longest web page from
it.