A view of the middle part of Piccadilly, from the end of Merchantgate, last summer. I don’t think it’s changed much since then, but it looks like it’s about to, as a planning application has been submitted to redevelop part of it. The redevelopment site is just along from Ryedale House (the tall block on the left) up to that building on the right (a shop known as ‘Tesco Express’. I think we’ve all seen one of those …)

I first heard about these plans via Twitter (which isn’t just full of people abusing one another, it’s an extremely useful source of important information). Council leader James Alexander announced the plans as a ‘Twitter exclusive’. The planning application was already online at (at http://planningaccess.york.gov.uk/online-applications/) so what was exclusive to Twitter I’m not sure, but I liked the fact that he was alerting the public to planning applications. (I’ve thought about doing that myself, for the ‘bigger’ applications. But then thought someone who gets paid by the council should do it instead.)

The tweet was greeted enthusiastically, with many people apparently glad that an ‘eyesore’ would be removed. Not sure which bit is seen as the eyesore. Not this bit presumably: 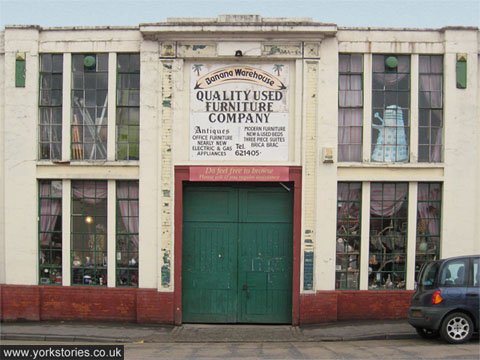 When I saw the tweet about the planning application for the site I assumed it would be demolished, as I’ve not seen much indication that York values its 20th century buildings. It was good to see that the submitted application includes the retaining of this Art Deco facade. Cheered me up to see that. It’s an aesthetically pleasing reminder of early 20th century real life, real commerce, in York.

The Press ran the story under the headline ‘New shops and flats planned for York – but bigger redevelopment abandoned‘ and the BBC website approached it in a similar way: ‘York Castle Piccadilly scheme scrapped by developer‘. oneandother.com had a more positive slant.

The responses to it were in many ways more interesting than the thing itself. James Alexander seemed keen to get the news out on Twitter as a positive story, and his supporters welcomed it. I welcomed the fact that the Banana Warehouse frontage was being retained, having been so upset in the past by this city’s lack of regard for its 20th century buildings. The Press likes to have a dramatic headline, so saying that the larger scheme had been ‘abandoned’ was good for them.

And in the middle of all that, one humble building, a fruit warehouse once, now selling second-hand (pre-loved, as the 21st century calls it) furniture.

Its painted lettering is charming: enjoy it while it lasts. 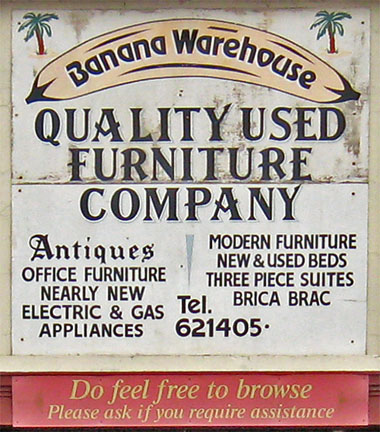 Here’s a fine old photo I ‘found on the internet’ of the building when it was new, with its original painted advertisements, when it stood in splendid isolation with no buildings alongside but with ripening bananas within
(can be enlarged this one): 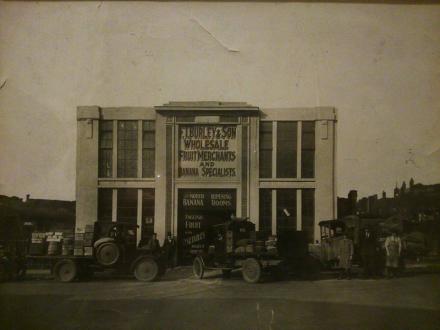 So it looks like one important building on Piccadilly might survive, at least in part, as a record of the building style of those interwar years, and this area’s history.

In York terms — all those centuries — Piccadilly’s history is short: it’s only a century old. But because we’ve been evolving and thinking for so many centuries now we’re maybe more able to respect and value a wider range of things, including our relatively recent history.

Just across the road is the other significant Piccadilly landmark. Or ‘eyesore’, depending on your way of seeing.

Entry for the Banana Warehouse on the draft Local List

By Lisa @YorkStories • 4 August 2013 Buildings
Tagged  Piccadilly, redevelopment
To link to this page's proper location please use the > permalink