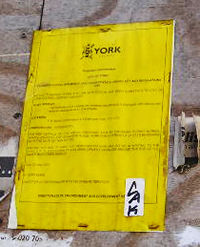 Government policy to use "brownfield land" (ie previously developed land, rather than greenfield/greenbelt land), along with the high demand
for housing in York, means that the city is covered with yellow planning
notices like the one pictured here, as bits of "spare" land
are proposed for redevelopment.

It can be difficult for us native old Yorkies to accept that our city
keeps changing. When I started taking these photographs and putting these
pages together I expressed some sadness that some of the more ramshackle
areas I remember have been cleared and used for residential development.
Some of us like the quiet forgotten corners, after all. Having talked
with friends I know I’m not the only one who misses the faded charm of
old industrial buildings.

But my reading and research for this site has changed my perception a
little. I was born in the late 1960s, around the time of Lord Esher’s
influential report on the city. Having now read the report, I can see
that in the years since a lot of work has been put in to make York a more
attractive place, not only for tourists, but for residents. In the 1960s,
areas in the centre were derelict, there had been no provision for the
growing amount of traffic, and it all looked a bit grubby and unkempt,
as many of the photos in Esher’s report reveal. I might like quiet streets
of tumbledown warehouses, but perhaps I have to forget my naive and romantic
notions . . .

As long ago as the 1980s, in my teens, I could see how the city was changing.
The riverside beyond Skeldergate
Bridge was one of my favourite places to walk, twenty years ago. It
was, as I remember, just a load of brick buildings, old warehouses. Soon
after, the redevelopment of the riverside area began, and now it’s luxury
apartments. They’re not unattractive, but I still sometimes miss the warm
tones of old red brick.

It sounds romantic and fanciful, I know, but in many ways those old red-brick
buildings said "history" to me more than the more obvious "historic"
buildings do. Those corners of York are less common now, as every bit
of land is reused.

I understand why old abandoned industrial buildings can’t really be left
as they are. Ultimately something has to be done and they are either demolished
or sensitively refurbished. Sensitive redevelopment of the more impressive
industrial buildings is always to be preferred (but it seems that another
"solution" might be to leave them to rot in the elements before
making a decision, so they’re beyond saving, making it easier to flatten
them).

York has always been protected by its committed citizens and its high-profile
heritage organisations, and this work continues. In the 19th century the
authorities wanted to demolish the city
walls, but public pressure stopped them. In the 20th century they wanted
to construct an inner ring road, and that wasn’t allowed to happen either.
And more recently a flawed plan to redevelop the area around York Castle
(Clifford’s Tower) has also
been halted.

These larger schemes got a lot of attention, rightly. But what work on
this website has revealed to me is just how much work goes on quietly
year after year, on a smaller scale, to preserve York’s heritage and improve
the environment. The 1980s scheme to redevelop the Aldwark
area has been much-admired, and in the years since other areas have been
sensitively redeveloped. Though many York residents feel that there are
too many residential developments, most of them are reasonably attractive,
some of them quite striking. Maybe in York we’re too dismissive of modern
buildings, because we have so much that is old and quaint. But it is the
mix of building from so many different centuries that makes York such
an interesting place. I just hope that the new-build apartments won’t
cover every single space, tipping the balance so that the place starts
to look like some kind of twee model village.

I can see very clearly now how government policy changes the finer details
of our lives, in the places we live. York has always been somewhere people
wanted to live, but just now, in the search for "brownfield sites", there’s
a battle for land that seems unprecedented. I guess we should be grateful
that we live in such a thriving, constantly developing city. But we’ll
be keeping an eye on those developers.