All bright on Bootham 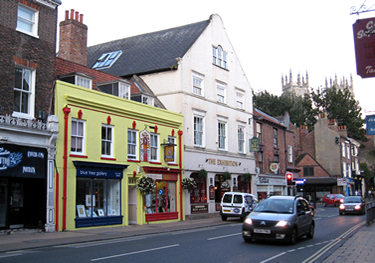 This photo was taken late in the evening, at the top of Bootham, with the Minster towers just visible to the right. As it was taken at dusk, everything looks a bit colourless and washed out. Except the Tandoori Night restaurant, which has been recently repainted. The first time I passed here I was wearing sunglasses, and had to lift them off my face temporarily when I saw this building as I thought they’d suddenly stopped working.

I suspect it won’t be like this for long, as it’s a listed building in a Conservation Area, and I think there are rules and regulations on what’s allowed on your historic frontage. Unless the regulations have changed, or perhaps if no one alerts the authorities (sshh!) – though the planning office is just over the road in St Leonard’s Place, and they might notice.

Depending on your perspective, this is either cheery, or inappropriate in a historically sensitive area. It cheered me up anyway. Particularly the way the drainpipes have been painted red. I’m from the school of thought that would automatically paint drainpipes so they blended in. Those tasteful Farrow and Ball paints used for historic properties even include a shade called ‘Down Pipe’ for this very purpose, so that when we visit stately homes our attention isn’t drawn to the plumbing. But some of the ‘rainwater goods’ down here are quite handsome, and I’m thinking that red is maybe a better celebration of them.

Anyway, enjoy it while it lasts.

It didn’t last long, that yellow. It has now been repainted in a more creamy muted colour, nicely setting off the red touches, which remain. Looks smart.