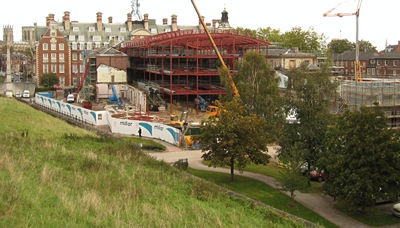 Work is underway to transform the old railway station (West Offices) into a new HQ for the city council. There’s been a lot of digging on this site, not all of it recent, and not all of it to do with construction work or the recent archaeological excavation.

Before it was chosen as the site of the city’s first permanent station, it was the site of a respected plant nursery, owned by the Telfords, and later by Thomas and James Backhouse.

According to recent planning applications to develop the area behind the art gallery, the Telford/Backhouse nursery was based within the walls of the St Mary’s Abbey/Museum Gardens site. I’ve found no evidence at all for this claim.

The Backhouses, best known for their later, larger site in Holgate, started their nursery business here on Tanner Row, buying the business previously run by the Telfords. Pictured left is the cover of what was probably their first catalogue from the Tanner Row nursery (available online at www.archive.org, and can be viewed in its entirety by clicking the cover image).

The Backhouse catalogue is just a list, with no illustrations. A book published in 1812 – The New Flora Britannica – does include illustrations of many of the plants the Backhouses were offering for sale in 1816, and I’ve included some of them on this page, to help us better imagine what the fashionable gardeners of 200 years ago might have been buying, and what the Backhouses were growing on that area of land sheltered by the city walls, now covered in railway-related buildings.

This is soon to be where we York citizens will go to visit various departments of the city council. While you’re waiting in planning, or cursing the queues at customer services, picture the neat nursery beds full of developing greenery that once filled this land.

Taking over from the Telfords

After learning the plantsman’s trade at a Norwich nursery, James Backhouse had wanted to set up a nursery in his home town of Darlington. As his sister records, he ‘felt somewhat disappointed when he found that the old and well-established Nursery business, of John and George Telford, of York, was to be disposed of.’ Clearly the Telfords had quite a reputation, and it seems that James Backhouse – a deeply religious man – saw this excellent opportunity as God-given, not to be turned down.

He records that the business had been in the occupation of the Telford family for one hundred and fifty years. Even if Mr Telford was rounding up a bit, ‘bigging’ up the nursery’s history, it still takes us back to the second half of the 17th century. Even before that it had been gardens – part of the land occupied by a Dominican friary – recognised in the fact that centuries later it was still known to many as The Friars (or Fryars) Gardens. 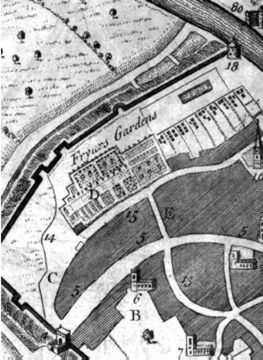 The garden and its nursery business was clearly well-established by 1736 when Francis Drake described the ‘spacious’ garden occupied ‘by Mr Tilford* a worthy citizen … of credit to his profession; being one of the first that brought our northern gentry into the method of planting and raising all kinds of trees for use and ornament.’

(*as anyone who has researched family history knows, the spelling of names was rather fluid in past centuries – Mr Tilford/Telford is also recorded as Tilforth/Tillforth and other variations)

Telford’s clients among the ‘northern gentry’ included the owner of Studley Royal.

Closer to home, in 1740, the nursery supplied 340 elm trees to complete the ‘New Walk’ in York, alongside the Ouse. (Many of these trees were later replaced (in 1824) by a variety of species from the Backhouse nursery.)

‘Jan 1737-8. Ordered, – that Mr John Telford shall have the profitts of the Admittance of Horses at the Knavesmire for one year, – for pains in draining and improving the said Common for the benefit of the Ward, and making it proper for the Horse Races.’

The 18th century local directories are rather thin, compared to the weighty tomes produced in the Victorian period, but John and George Telford, ‘Seedsmen, Tanner Row’ are in the slim Baileys Directory of 1784, and in an earlier directory of 1781, where they’re listed as Tillford.

With all the digging associated with gardening, it’s surprising that the recent excavations found so much remaining in the ground, apparently undamaged. Relics were being uncovered (and accidentally hit with implements) in Telford’s time. A 1771 publication reports:

Last week was found, two feet deep, in a piece of ground called Friars Gardens in the city of York, belonging to Mr Telford, where the workmen were digging, some part of the foundation of a temple of Roman brick-work, so firmly cemented, that it resisted the stroke of a pick.

The Backhouses at Tanner Row

James Backhouse felt the nursery business at Tanner Row was too large for him to manage alone. His brother Thomas agreed to go into partnership with him. They took over the Telford nursery in May 1816.

The nursery business at Tanner Row flourished, despite the departure of James Backhouse in 1831 on Quaker missionary work. He travelled to Australia, and after ten years returned, via Mauritius and South Africa. His absence perhaps helped, rather than hindered, as he sent back exotic plants and seeds to the York nursery, many of them mentioned in the horticultural journals of the time as new arrivals of great interest.

A glimpse of the impressive set-up at Tanner Row comes from a letter written by the Backhouses’ gardener, Henry Bains, on 4 December 1827. He describes the plant-raising facilities: ‘The three cisterns in three of their houses are built with brick and Roman cement, and are 24 ft. long, 1 ft. 10 in. wide, and 2 ft. 9. in. deep, and are all heated by one boiler, the flue, to which is continued through the houses, and gives out a considerable quantity of heat.’

(The ‘Roman cement’ presumably refers to a type of cement mix, rather than to actual Roman cement. Though the place seems to have been littered with Roman fragments, and the occasional relic from the Dominican friary.)

But the railway was coming, and the Backhouses had to move to make way for it.

The major earthworks involved in constructing the new station and its lines and platforms dug up many treasures not yet unearthed by previous gardeners and workmen, enthusiastically reported in Hargrove’s Guide:

The remainder of this year [1839], and the beginning of 1840, were very fruitful in the discovery of Roman relics of the most interesting description. The excavations for the railroad having extended into Backhouse’s Gardens, near Micklegate Bar, supposed to have been the site of a Roman Temple dedicated to Serapis, and afterwards the place where a Monastery of begging friars stood, the workmen daily found Roman baths, altars, coins, urns, pateras, and all kinds of sacrificing vessels, together with the remains of Roman walls, &c.