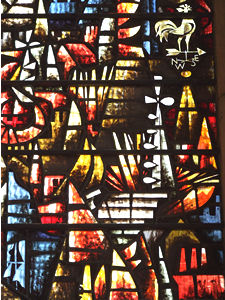 It’s one of many modern elements that have been integrated into the historic fabric of the church.

St Martin le Grand was severely damaged in the Second World War, during the bombing known as the ‘Baedeker raids‘, when historic cities were targeted. The church was later partly rebuilt, in the 1960s, by George G Pace. This new window dates from the 1960s rebuilding, and is by Harry Stammers. It shows, in suitably fiery colours, the burning of the church.

More on the Baedeker raid >

St Martin’s was burned out, except for the south aisle and tower. After the rebuilding, the church was re-hallowed in 1968, by the Archbishop of York, and serves as ‘a shrine of remembrance for all who died in the two world wars, a chapel of peace and reconciliation between nations and between men’.

Alongside the restored part of the building, a walled and gated garden area, open to the sky, has been created from the shell of the rest of the church. 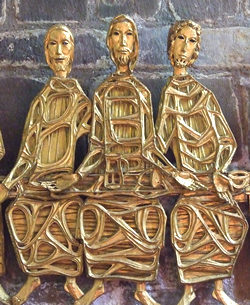 Beneath the strikingly modern stained glass pictured above is a sculpture, even more striking, dating from 1967, by Frank Roper. Designed as a reredos for the altar, it depicts the Last Supper, in aluminium, gold-painted. I imagine many people would find it rather ugly, maybe a little brutal, with all the twisted shapes making up the figures. But the morning light through the window caught it, and as I looked at it properly I found it conveyed more than the traditional church imagery often does. This photo shows just a detail, from the centre of the sculpture. I found it a powerful and beautiful piece of artwork, and perfect in its setting (though I believe that for a time it was considered too controversial, and placed at the back of the church). 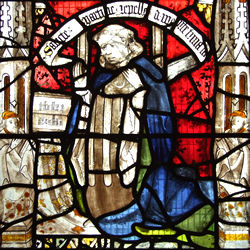 Not all is modern. As you enter the church, an enormous window is ahead, surprisingly located at eye level, as it was reconstructed here as part of the rebuilding of the church. It was originally the west window of the nave, and dates from 1437. It had been removed from the church earlier in the war, and so escaped bomb damage. Hutchinson and Palliser’s guide to York calls this "certainly the largest and arguably the finest of the city’s parish church windows". Again this image shows just a detail. (See the link at the foot of the page for more information on this window.) 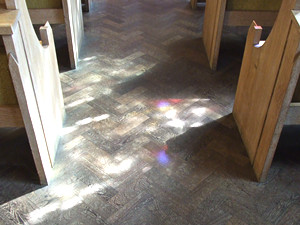 Many of the church’s fittings, including the pews, are modern, designed during the 1960s rebuilding. It was only on my second visit that I noticed how attractive the modern pews are, and also how, in the morning sunlight, the older stained glass alongside casts bright colours onto the floor between them.

To my eyes, the 20th century elements here looked as handsome as the ancient parts, perhaps more so.

It took some vision to restore this place, and resurrect it from the smouldering ruins left in April 1942.

The memory of the war is built into the very fabric of this church. In niches in the wall, behind metal grilles, are books of remembrance. The lettering here says: 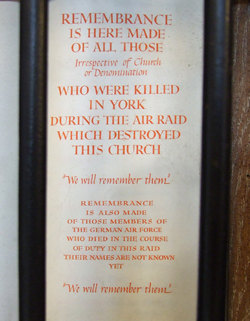 Remembrance is here made of all those

Remembrance is also made of those members of the German air force who died in the course of duty in this raid. Their names are not known yet.
"We will remember them"

Proper Christian forgiveness in action in those words. Many people, including members of my own family who lived through the blitz on Hull, would have found it hard, I think, to show such all-encompassing love and forgiveness. Though of course it changes, over the years, when we realise that there is more that unites us than divides us.

The vast west window, reconstructed, is behind a railing, and also just behind the railing is a carved stone in the floor, pictured below. It was lit by a candle, and the light from the window.

I’m not a religious person, but you don’t need to be religious to be moved by this, and by the whole of this small, perfect, rebuilt place.

In its every detail, from the medieval windows reconstructed, to the carefully-crafted woodwork and railings of the 1960s rebuilding, to the prayers for peace and the message on the door as you leave, it speaks of a commitment to forgiveness and reconciliation. Maybe only properly felt and understood by those who have lost their loved ones, and watched their buildings bombed and burning, and had to recover from it, and rebuild anew. 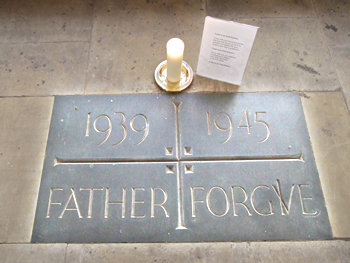 This site includes further pages on York in the Second World War.

More information on the air raid on York on 29 April 1942 can be found on NE diary – 1939-45. Images of the bomb damage are included in the collection at www.imagineyork.co.uk.

More information on St Martin le Grand, and detailed description of the west window, can be found at http://freespace.virgin.net/cade.york

Background information came from – Yorkshire: York and the East Riding (Pevsner Buildings of England), by Nikolaus Pevsner and David Neave; from York (Bartholomew City Guides) by J Hutchinson and D M Palliser (apparently no longer in print), and from the websites listed above.