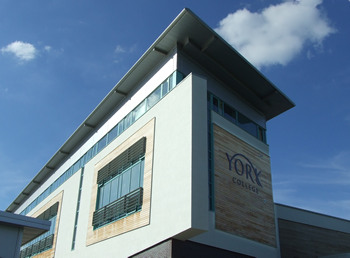 This, one of York’s newest and most striking buildings, is on the outskirts of the city. After a long walk to Bishopthorpe, I wasn’t sure whether it was worth taking a detour right up Sim Balk Lane, on a hot day in July, to take photos of it, when I knew I already had a walk of a few miles back home.

But when I saw this particular building for the first time, passing by in the car, I did say "Wow", in a genuinely admiring way, and thought I really should make the effort and have a better look.

The new building is almost finished at this point, and with its lettering in place, all proud and modern in blue plastic: York College. It was, previously, the site of the old York Sixth Form College, which I attended for two years in the 1980s. 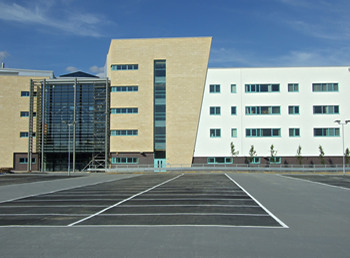 It has a bizarrely huge car park. Having walked so many miles already, it seems I have further miles to walk across white-lined tarmac. And it’s apparently a split-level car park. There must be more of it underneath. And yet there are still concerns about a lack of parking spaces.

I think they probably need buses laid on – not to get the students from their homes, but to bus them across the car park to the actual college building. 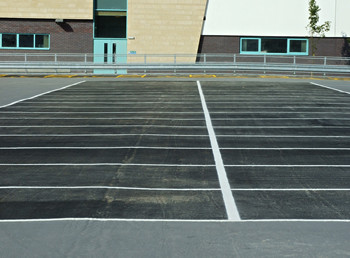 It is a fair way out of town, unless you live in the Tadcaster Road area. In the old days, in the 80s, most of us used to get here by bus, from various points around the city. As this road joins the A64 to Leeds, many of the buses available were the longer distance ones, some of which were on some kind of limited stop arrangement, as we learned to our cost one day when the bus driver wouldn’t let us off the bus by the college and we eventually disembarked somewhere near Copmanthorpe. Or was it Leeds. It felt like a long walk back, anyway. 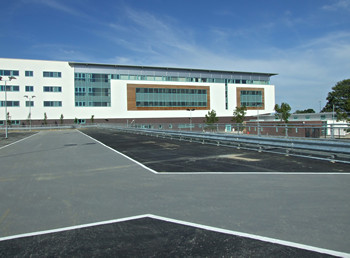 When I arrived at the sixth form college, it was also new, though the actual building wasn’t – it had been adapted from the old Ashfield School.

We were part of the first year’s intake, after the reorganisation, after York’s grammar schools were closed and we changed to the comprehensive system. There was a sense of newness then. Indeed the whole time here, on this patch of land now altered beyond recognition, brought many moments of illumination, and remind me of the late-teen arrogance that makes a young person say foolish things like "I want to take the Oxford entrance exam". 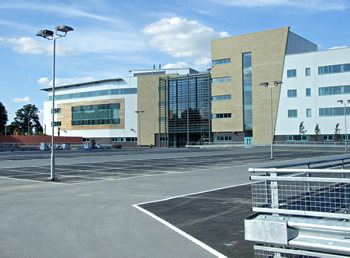 All the schools I was educated in were rather "homely", architecturally. None of them were designed to look imposing. This building doesn’t say homely, doesn’t attempt to reflect any tradition, it seems very much 21st century. I’m impressed by this brave new place.

I’ve no photos of the old Sixth Form College that was here before. Just lots of images stored in my head. But not of the buildings. I barely noticed them. Instead I remember the details and the faces from that time, how our lives were, walking home from this place.

I’m imagining the new students arriving here, mobile phones and MP3 players in hand, and I’m remembering Smiths albums, on vinyl, late 1980s. A small address book full of the names and phone numbers of college friends. How we had to phone one another via phones attached to walls, how usually the friend’s dad answered, sounding irritable, and then shouted their name up the stairs.

I’m thinking about the new students arriving by car, and remembering how we often walked home on warm September days, and a particularly hot autumn day when my friend Una mentioned something about "the greenhouse effect". She laughed when saying that everything was going to warm up – welcoming it, because, we agreed, it was too bloody cold here most of the time. We weren’t worrying about climate change – a phrase we’d not yet heard – but we were worried by the AIDS adverts, with the icebergs, that were so apocalyptic that even 80-year-old virgins were terrified.

Though the new place is catering for a wide catchment area, and a wider range of students, I guess some will still be walking home as we used to, along that grand old road that takes you towards the city, past the Knavesmire and the racecourse, under fine old trees, past grand old houses.

This time I’m taking a different route, along a cycle path and then via the racecourse, as I want to call at the old Terry’s factory, empty now. It’s been a mammoth walk and I’ve been out for so long I’m being worried about back home, and I’m texting home to say that I’m somewhere on the racecourse, still a few furlongs away from a nice cup of tea. With lines from an old Smiths song going round in my head.

Back to the 80s . . . the AIDS publicity commercials