There’s been an anti-graffiti campaign locally inviting residents to ‘turn in a tagger’. This is obviously a controversial issue – it costs a lot to clean up graffiti, and much of it is an ugly mess. But some of it is colourful or witty and is found in locations that would otherwise be colourless and grim. Indeed some of it may have been officially sanctioned, I don’t know. I think the best examples are worth photographing, so here’s a small selection. 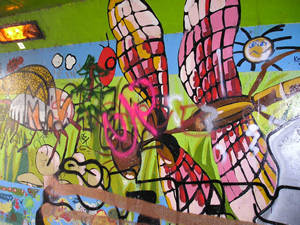 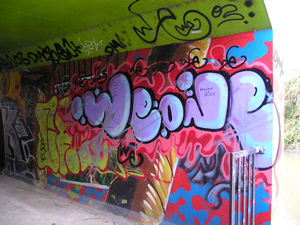 Under
a grim bit of covered area near the Foss, on the walkway between Foss Islands
Road and Rowntree Wharf. It seems like an original painting has been embellished
by rather less skilful artists.

And a couple of thought-provoking ones. This one in chalk, so I guess it
washes away. ‘Adventure is dead.’ On a wall opposite the Assembly Rooms,
22 August 2004. 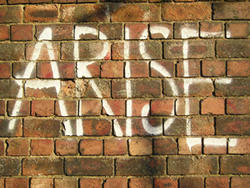 The track known as Cinder Lane, between Leeman Road and Wilton Rise, seemed
to have been visited by a somewhat spiritually motivated graffiti-ist. ‘Arise’
– photographed on 5 September 2004. Another message, on the tarmac, read
‘Embrace heavenly virtue’. 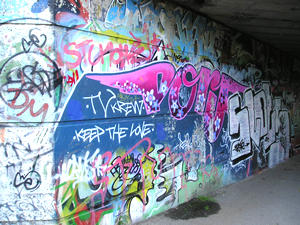 The cycle track between Rowntrees (as I can’t help calling it – though it’s
now of course Nestle) and Layerthorpe is covered in graffiti, to a rather
depressing extent. If it was just on these walls under the bridges it might
enhance the rather dull brickwork, but it seems to have spread to cover
every available surface.

‘Keep the love’, it says. A fine message don’t you think? – one that we could all do well to remember.